Cancer is not a competition.

I'm not very competitive. Of course, everyone likes a win, but I'm okay with taking a loss, learning from it, and moving on. I've just learned though, that, in a round about way, I am a perpetual winner. You see, I have breast cancer, and that's the best cancer to have. We get the majority of the funding raised for cancer and we have a monopoly on awareness. Hell, we even unofficially changed the name of a month (Pinktober anyone?). Now that's freaking power right there. We already found the cure and are just holding off on making it public because we don't want to upset the other cancers that no one cares about.

What? None of that is true? Oh, well, it is if you ask Official Pancreatic Action, a pancreatic cancer awareness organization in the UK. Their latest ad campaign features a picture of a woman, with a bald head (presumably from chemo), and next to her is a quote, "I wish I had breast cancer." This ad campaign calls this "cancer envy." Yes, you see, according to the PCA, since those of us with breast cancer have it so good, everyone wants to be us. 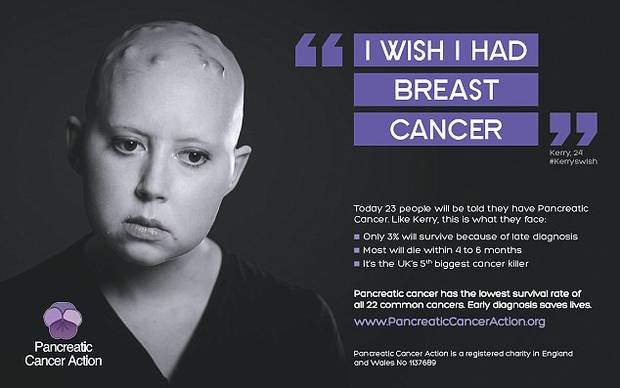 Everyone that is, except us.

Breast cancer is no walk in the park. Early detection has been saving more lives than ever, but there's a whole bunch of us living with breast cancer that is beyond a cure. We're late-stage, Stage 4, metastatic cancer fighters and we don't have it so great. We live with pain and sickness, both physical and mental, every day. We fight for a "normal" life while knowing our cancer can wipe everything away in a second.

Breast cancer is just an umbrella term. There are many subtypes and variations of breast cancer that no one is even aware of, even those of us that have breast cancer. You know why that is? Because most of that money raised during Pinktober, and other charity events, goes to early detection (mammograms and research). Little known subtypes like inflammatory breast cancer and triple negative breast cancer get bupkis in comparison. And for those of us with these rare cancers who are also Stage 4? Forget it. We may as well be standing on the street with a mug in our hands.

We don't do that though. We also don't attack any of the other cancers and claim that they're the reason our members are dying. We join together to promote awareness. We write blogs, speak to classes in high schools and colleges, plan charity events out of our own pockets, share information with friends and family, and even strangers. We recognize that cancer is the enemy and we can't accomplish anything when we turn on each other. There's a quote someone shared with me in high school that has stuck with me, and kept me from stooping to the level of bullies. "Don't blow out other people's candles just to make your own shine brighter." There is a way to create awareness for one cancer without diminishing the fight of those with other types. Cancer is the bully and we need to stick together to create an endless flame that stands up to cancer and will eventually force it to burn out.

But did anyone actually learn anything from this ad? Was that their intention to raise awareness for pancreatic cancer, or to take it away from other cancers? Where are the statistics (that they clearly must have if they're comparing cancers, right?). Where are the voices of all the other people who are living with with pancreatic cancer? And the family and friends of those that are gone? What about the research being done? How can you ask people for funds if you don't' share what they're going to be used for? Where is the list of signs and symptoms that we should lookout for, and that we can share with others to try to prevent pancreatic cancer, or at least catch it early?

The PCA has failed at the goal of awareness and bringing the cancer community together, and has instead, pitted us against each other in a fight we never wanted to be in.They missed a huge opportunity to raise awareness for pancreatic cancer, and all of the lesser known cancers. A rising tide raises all ships, but the PCA missed the mark and tried to sink ours. Fortunately our life preservers, our fellow fighters, came to the rescue and are working on keeping us afloat, so we can continue to promote awareness, and fight the fight, together.