HAVANA -- A picture of Paris Hilton and Fidelito Castro, she the great-granddaughter of Conrad, the founder of Hilton Hotels, and he the eldest son of Fidel, was of course news, because it was immediately allegorical of the nascent thaw between the U.S. and Cuba, finally, after 54 years. It was like a selfie of Romeo Montague and Juliet Capulet, capturing that spirit of the younger generation in love, as opposed to the hatred of their elder generation. Such an instantly strong symbol of rapprochement or détente or glasnost or perestroika between the two countries completely relegated Naomi Campbell to playing second fiddle to Paris Hilton, which is usually the other way around on the Richter scale of paparazzi value. But the symbol of Pax Americana in the name of Hilton simply trumped every other celeb in Havana, including Kate Moss, who was also at the Cuban cigar festival.

The real question, however, was: was there any real substance behind that picture of Hilton and Castro that painted a thousand words? The answer is, of course, emphatically "no." Paris Hilton is a celebutante, or one who is famous for being famous, but is as remote to the power of Capitol Hill as a Martian. Fidelito Castro, perfectly photogenic as a dead ringer for his papa, is a nuclear physicist, totally devoid of any political influence within the Cuban government. Ergo, this Hilton/Castro meeting was not exactly comparable to Nixon meeting Mao in Beijing, or Reagan meeting Gorbachev at Reykjavik. On the contrary, there was not an iota of historical substance behind that rendezvous, other than the sensational image of a token American and a token Cuban, lending instant credence to the recent surprise announcement by President Obama for the U.S. to re-embrace Cuba.

What is perhaps more interesting is the reminder of the embittered juxtaposition of capitalism and socialism that has shaped the modern history of Cuba. Did Conrad Hilton, Paris's great-grandfather, who opened his eponymous hotel in Havana in 1958, at the time the tallest and the largest in the whole of Latin America, ever think that it would be nationalized within a couple of years? In fact, he must have got wind of imminent turmoil because by the time he attended the opening ceremony on March 22 in 1958, the U.S. government had already announced an arms embargo against Cuba under Batista earlier that month on March 14. Within nine months, Fidel Castro had requisitioned the hotel as his command center for his revolution. But Conrad couldn't have been too bothered, as he didn't really suffer any great financial loss in the scheme of things because he was only brought in as an operator. He did not invest in the building of the hotel. The money came from the pensions of the Cuban Catering Workers Union, sanctioned by the cunning Batista. There was no real dent in either the fortune or reputation of the Hilton dynasty.

"The substance of that pictorial mirage, as suggestive as the fall of the Berlin Wall, will require a lot more."

The truth, therefore, is that Hilton's involvement in Cuba was far from extensive, and his name's tenure in Havana was ephemeral. But again, symbols counted for more, much more -- as the name Hilton was a mascot for American capitalism, and its abruptly short life expectancy in Havana became propaganda fodder for the Cubans in defeating the most powerful country in the world, against which they have stood in defiance, just 90 miles away from the Florida coastline for over five decades. Such symbolic history, together with real triumph at the Bay of Pigs and the aborted CIA assassinations, are the glorious legacy of the Cuban Revolution that has underpinned Castro's power as a supreme head of state for as long as anyone else in the world other than the Queen of England. Let us not forget that Castro's provenance included the deracination of the rampant bribery and corruption from which the avaricious Batista benefitted, with the connivance of the Mafiosos. Even John F. Kennedy, in his famous speech in Miami in 1963, expressed sympathy with Castro for his toppling Batista's treachery amongst the Cuban people. And that was after the Cuban missile crisis.

Regarding the recent overture for normalization between the U.S. and Cuba, each country has its own internal difficulties to overcome before a genuine truce can be realized. On the U.S. side, Congress will have to repeal the laws on the embargo, on the use of the U.S. currency, on the sanctions based on extraterritoriality, and most of all, on the delisting of Cuba as a state for sponsored terrorism. These are no mean feats, especially if a Republican presidency were to be elected next. On the Cuban side, there is a great issue of face, for the gradual opening and success of the country is a matter of pride for the Cuban Revolution, and it simply will not allow the U.S. diplomatic initiative to take all the credit for genuine changes in Cuba. The Cuban government has not struggled and suffered for over 50 years of American contempt to be given no recognition for its survival and improvements.

The question here is not whether the Cuban people have had their livelihood improved despite the country's privation, but rather, is their future improvement in livelihood going to be viewed as the direct result of the U.S. unshackling its embargo chain? Even if this were to be the reality, because without it, Cuba would never be able to open properly to the outside world, the sensitive Cuban government would not acknowledge it. It will never abandon the claim for full merit and credit for its revolutionary rule, especially from its own people.

So the pretty picture of a smiling Hilton and a smiling Castro might float symbolically across the cyber universe, gathering Internet hits and fueling the superficial expectations of real changes in the long enmity of America and Cuba, yet the substance of that pictorial mirage, as suggestive as the fall of the Berlin Wall, will require a lot more -- a lot more paperwork and iron political determination. 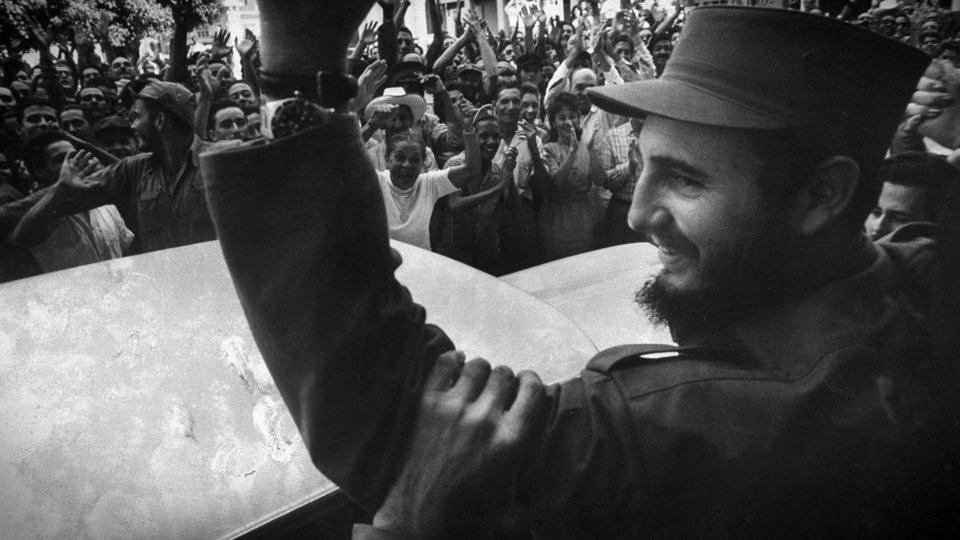 1 / 12
In January 1959, after nearly six years of guerilla war, Castro seizes control of Cuba from the corrupt Batista regime. Later that year, Castro’s visit to America is generally friendly. The U.S. government remains cautiously optimistic that differences with the new regime can be worked out. But these hopes would prove unfounded. (CloudsOverCuba.com)
CloudsOverCuba.com