Starting with the second day of CES, the doors to the halls open an hour earlier. (I presume that they open later on the first day to give vendors more time to get their booths ready.) So, I have less time in the Press Room to deal with things, and this will be even more random than yesterday.

I spent yesterday in the South Hall (upper and lower levels) and then went to one of my favorite events at CES, Showstoppers at night. More on that in a bit.

I was a little underwhelmed by the South Hall this year. The quality was fine, but there seemed a bit of sameness to it. Lots of similar groups that promoted that they were the Best Ever and the First Ever that were a bit difficult to differentiate between them, so I tended to skim past. (I also avoided the Gaming area, as well as Photography and Imaging. Games aren't anything that interests me much, especially with so much else to see at CES. Photography is vibrant, but cameras tend to be such high quality that they blend into one in my eyes, and imaging follows on the heels of that. However, I did notice that aspect is growing, and there were a few more 3D printers now in a more consumer price range.)

Oddly, there were a bizarre amount of companies offering personal "drones" with cameras attached for the consumer market. I saw maybe half a dozen. I'm sure there were more. If you didn't look close, they just look like toys, but they're quite sophisticated - and several were much larger than toy size.

Also a bunch of e-payment options, which appears to be a growing market. More common than other were cards which allowed you to register all your credit cards on this one cards, and when you go to pay, you tap it to the magnetic swiper at checkout. Then a display pops up - either on the card, or the "card device" or whatever - that lets you select which card you want to use. Plasticard, Pocket Smart Wallet and Loop Pay were three that stood out, though I'm not quite sure how viable most of them are.

And the field of "connected homes" are growing like weeds. Some are more on the high end (like Nest, and like-companies) that give you almost full control of your residence. More common are individual Smart products. ("Smart" is the word I saw most at CES...) Smart everything, including Smart toothbrushes. More on them later, too...

I'd read in a non-tech publication how Virtual Reality would be a huge deal this year - and it wasn't. Maybe there was more in the Gaming area, but that tends to be what I've found VR to be at the moment, a growing area for games. But the Virtual Reality I saw seemed less like creating an alternate universe than just adding 3D imaging to the issue at hand. One company, Gamedei, for instance, had VR goggles that cleverly connected to your Smartphone, and let you see your content (games and movies) in 3D. Swell and fine, expect the price range was $1,000 - $1,800. Seriously, dudes?

The evening brought me to Showstoppers. That's one of the two night-events where a few hundred vendors are brought together in a large ballroom, where the press can wander around in a comfortable, contained and reasonably quiet environment. A lot of sensory overload, nonetheless, (sensory overload is big at CES but among the things that stood out were -

Several companies that give alternate ways to authenticate your identity with either voice (Agnitio) or eye tracking (EyeTribe). The latter also provides a way to control your PC or tablet - which sounds great in theory, but I was less whelmed in practice.

I liked Glide, which is basically like sending texts, but rather than typing words sends video streaming to another person. And if the person isn't available on the other end, the stream will be recorded for viewing later. At the moment, the apps are available for iOS and Android. It seems to be in the early stages, but should be available.

I was also especially fascinated by the Yota 2. This is an Android phone that has two faces - front and back. The front is a normal Android interface. Turn the phone, and the other side uses E-ink, like that on eReaders. It's not the same interface, but you can pretty fully configure it. The advantage of using the E-ink side is that it used seven times less battery and can be always on. Depending on your settings, you can get up to six days of battery life from your phone, not eight hours. The downside is that, as you likely know from eReaders, there's a bit of lag time when you swipe. Still, it's very intriguing. It's brand new, only available in London and parts of Europe for just a few weeks. They're meeting with carriers in the U.S. for coverage here. 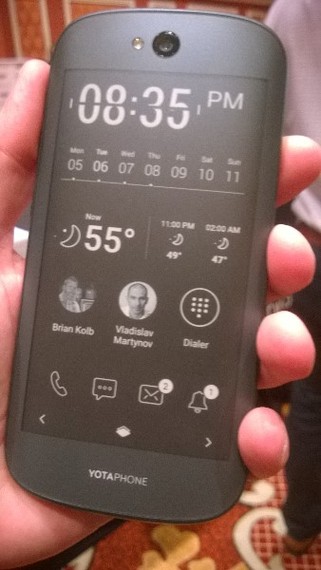 A couple of small products stood out. Most notably was the Primera Trio, which is a portable all-in-one printer/scanner/copier. It only weighs 2.6 pounds and is about the size of a Kleenex box. The sheet feeder isn't big, but holds 10 pages. It's not for everyone, but if you travel much or do work on the road, it looks potentially valuable. It will be available in March, and should retail for $399.

Also, there was another small laptop charger, similar to the Zolt I mentioned yesterday. This is Finsix Dart, far more convenient than the big "bricks" that come with standard laptops. The Dart is a bit smaller than the Zolt, though doesn't have retractable wall plugs. (There are advantages and disadvantages to each.) Both come with adapter plugs for different company's laptops.

And finally, there were the Smart Toothbrushes I mentioned earlier. There were two at the event - one from the well-known Oral B, the other from Kolibree. Basically, they connect to your Smartphone via an app to check on how you brushing your teeth, if areas are being missed, how long you're brushing in areas, and the strength, and so on. Surprisingly, I found Kolibree's more interesting, in large part because they do what I saw Philips do at IFA Berlin with their like-product - they developed games for kids to earn points on an adventure when they brush, helping get over that hurdle of parents, convincing their children to brush their teeth. Also, they've partnered with companies that will give "prizes" if you score enough points with good brushing, like discounts for cleaning at participating dentists.

And now, I have to rush off, and dive into the world of the Central Hall (always the most numbing with the Big Boys and their TVs and razzmatazz) and the North Hall (with the iLounge) and...more.