Social Security's cost of living adjustments (COLAs) hardly keep pace with inflation, and cutting them is bad policy -- even with a bump in benefits for the oldest old.

A new analysis by Social Security Works finds that if the Administration's proposed switch to the chained CPI for Social Security were enacted, the average worker retiring today at age 65 would see his or her Social Security benefits cut cumulatively by $15,615 by age 95.

The benefit cut starts out small -- only about 0.3 percent in the first year. But with the chained CPI, the magic of compounding works negatively over time, as the red trend line in the graph below shows. 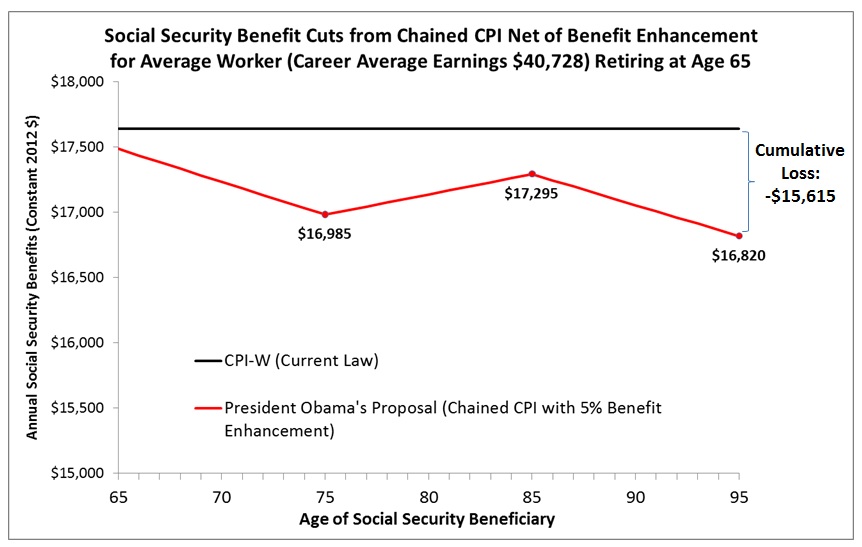 Cognizant of the harm this benefit cut would do to seniors and people with disabilities over time, the Administration has proposed cushioning the effect by providing a partially compensatory bump in benefits from age 76-85 for retirees (or in the 15th-24th year of benefit receipt for people with disabilities). Yet for the average worker, this "benefit enhancement" never restores one's annual benefit to what it would have been without the switch to the stingier COLA. And what is more, the bump does not return to the elderly the income they will lose between retirement and their 76th birthday -- represented by all the space between the black and red lines above (for more detailed analysis, consult our fact sheet). Benefits decline steadily again from age 86 onward, when the vast majority of seniors have exhausted their savings and ability to work, and may have lost their partner as well.

It should come as no surprise that beneficiaries will see significant cuts from the chained CPI, even net of the proposed compensatory bump: the whole point of this measure is to cut Social Security outlays. As Nancy Altman noted it in her recent testimony to the House Ways and Means Subcommittee on Social Security, the chained CPI "is nothing more than a benefit cut masquerading as a technical adjustment". It is an adjustment based on a false premise: it would in fact not produce a more accurate COLA for Social Security, as 300 economists and other social insurance experts have attested.

Seventy-seven million baby boomers have entered or are approaching retirement. Social Security will make up the bulk of the income most of these seniors will have at their disposal. Today, six in ten of our elderly rely on Social Security for two-thirds or more of their income, and about one-third rely on it nearly exclusively (for 90 percent or more). Benefits are modest: the average Social Security retirement benefit is $15,190, and median income for seniors -- including Social Security -- is $19,939. As our private retirement system continues to underperform and Medicare premiums rise, cutting Social Security COLAs based on a false premise is bad policy. Those on Capitol Hill who support the Administration's proposal are sure to learn in the 2014 mid-term elections that it is bad politics as well.