Congressman Charlie Wilson was a twelve-term United States Democratic Representative from Texas from 1973-1997 who was known by his (in)famous nickname "Good Time Charlie." A self-proclaimed "ladies' man," Wilson embraced his hard-partying image, claiming that his constituents knew they were not electing a "constipated monk."

Despite his playboy persona, Wilson was known for his passionate anti-Communism. He famously fought to increase U.S. funding and support for the Afghan Mujahideen in their fight against the Soviet Union after the 1979 invasion of Afghanistan, which was later described in a book and movie, both titled Charlie Wilson's War. Congressman Wilson made several trips to neighboring Pakistan on fact-finding missions - sometimes accompanied by one of his attractive "Charlie's Angels." 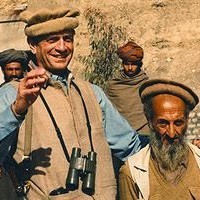 This moment was compiled from an interview by ADST with Alan Eastham (beginning in July, 2010), Principal Officer at the U.S. Consulate in Peshawar, Pakistan from 1984-1987. This moment was edited by Jake Silverman.

The Time Charlie Wanted to Borrow a Military Aircraft

EASTHAM: I really liked Charlie. Charlie was a neat guy and Tom Hanks played Charlie to perfection in Charlie Wilson's War. It was interesting I didn't see it from the same angle. A fellow by the name of George Crile wrote the book Charlie Wilson's War. Crile is dead now but I knew him; he came out to Peshawar, usually when Charlie was there, to film stuff and he was there occasionally. He was more or less an independent video producer who did some work for CBS.

Charlie was such a vivid character, he was about 6'4", thin and he had fought alcohol all his life. He had had a drinking problem, he was famous for the pretty girls that he had working in his office and all that stuff. Charlie hated the Soviet Union; he was an anti-Communist, absolutely to his core.

I'll tell you a couple Charlie Wilson stories. Charlie came out one time and he brought a beautiful young woman with him. There are some pictures in various books of this woman in an ankle length fur coat in the arms bazaar at Darra Adam Khel.

I was there; I was the host for that visit. It was a party of three, Charlie and the woman and the colonel, there is a U.S. Army Colonel who just died [in 2010] who was his regular military escort. They arrived in Peshawar on the U.S. embassy defense attaché plane which was a C-12, it's a Beech King Air military version.

At that time, there were two of these aircraft in Islamabad, one assigned to the Defense Attaché and another attached to the Office of Defense Cooperation, the military aid office. We did the usual things. We went to Darra Adam Khel, the famous gun-making town. We met with the various Afghan resistance leaders. We went to the ICRC [International Committee of the Red Cross] hospital where they were doing all this repair work on wounded Afghans. It was normal Charlie stuff. 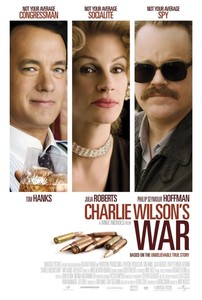 Then Charlie said, "I need to straighten out this airplane business." He phoned the Ambassador at the time who was Deane Hinton and, well, there was some back story. Before he left Washington Charlie had gone to the Pentagon and said, "You know I've got this really complicated schedule in Pakistan. I need to go from Islamabad to Peshawar to Lahore to Karachi and the Pakistani International internal flights don't work for me so can I use the defense attaché plane?"

No less a person than the military assistant to Secretary [of Defense Caspar] Weinberger, one General Colin Powell, had told Charlie, "Yes, Congressman, you may use the plane, your military escort may use the plane but the woman can't go. She is not an official member of the delegation, not your wife, she is no relation, she is not official, and we can't let her ride on the plane."

So Charlie had arrived in Islamabad and he went to Ambassador Hinton and he said, "Deane, I don't want to go on that Pakistan International Airline flight. Can you get the plane to take me over to Peshawar?"

Charlie Wilson and "Angels"Ambassador Hinton, of course, always an accommodating fellow said, "Sure." And they put him on the C-12 and sent him to Peshawar. When the colonel who flew the plane sent in his mission report, he got a rather tart message back from the Office of the Secretary of Defense saying, in essence, "Don't do that again. Don't take the woman."

Then ensued the most violent tantrum that I've ever seen from a grown man. Charlie was on the phone with the Ambassador, yelling at him about the airplane. The Ambassador did not give him satisfaction about the C-12 coming to pick him up the next day to take him to Lahore.

Charlie hung up the phone with such violence that he knocked the lamp off the table and he broke the phone. Then he went on strike and he said, "I'm not going to the dinner hosted for me by the governor of the Northwest Frontier Province, I'm not going."

So about ten minutes later, Ambassador Hinton called back and he said, "Let me talk to Charlie."

I handed the phone to him and Charlie said, "Uh huh, yeah, yeah okay." He hung up the phone. The upshot was that the Ambassador had arranged for President Zia's Falcon jet to come pick Charlie up the next day and take him to Lahore.

Of course, Charlie couldn't turn down an offer by his good friend President Zia-ul-Haq of the offer of the presidential aircraft but Charlie did get his revenge. He thought for a couple of minutes. He called the Ambassador back and he said, "I want your plane, too, and I will meet the restriction and we won't put her on it."

His parting words as reported to me by the colonel when Charlie left the country are quite profane, and I don't think I will repeat them for the tape, but it had to do with "You better enjoy that airplane while you got it because that is a line item." A line item meaning something that Charlie in his position on the Defense Appropriations Subcommittee of the House Appropriations Committee could delete or move.

So Charlie got his revenge.

The Time Charlie Tried to Go To Afghanistan

Another Charlie story. Late in my tour, this would have been around 1987, here comes Charlie again. My guidance was this was going to be a low-key visit; he is alone, no escort, everything is fine, and he will be there a couple days.

So I went out to the airport, pulled up on the military side of the parking lot; there lands a Pakistan Air Force C-130 aircraft, steps come down, and here comes Charlie alone.

So I walked him over to the car and we got in the car and driving back to the consulate and I said, "Charlie, we'll go get some coffee or something." It was a little before eight in the morning, it as pretty early for him.

I said, "What is that Congressman?"

He said, "I'm going to Afghanistan and there is nothing you can do about it, you can't stop me."

We got back to the house and at that point I'd had some time to think about it and as we sat down to have a cup of coffee, I said, "Congressman, there are two things I'll ask of you. One is to tell me who you're going with and, two, tell me when I should start to worry, if you don't come back."

He said, "No, I'm not telling you anything. You might try to stop me."

So I said, "Okay, fine." So I'm scrubbing the schedule now, I've got a whole schedule arranged for him but he is leaving, going to Afghanistan. A few minutes later somebody came up from the front gate and said, "There is a car here to pick up Mr. Wilson."

I said, "Okay, Charlie I'll see you later." I shook his hand and saw him off. The car drove away. Then I asked the gate guard whose car he had boarded, and the guard named the Afghan Resistance guy who usually went around in that car. 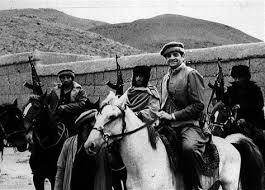 I had a "Plan B" in my head to find out, but didn't have to use it. So it wasn't a secret. He just didn't understand that it could not be covert for him to go with the resistance to Afghanistan.

I had invited 30 people to come for dinner that night so I'd decided to go ahead and have the dinner even though he was not going to be there. We were all sitting around the living room having a drink before dinner and in comes Charlie. It was almost like a cartoon character; he had this big cloud over his head, he was not happy.

He came in and he came into the living room and he said, "I don't know who's done this to me."

He told me that on the way down to Kurram Agency, where they planned to cross, he had passed through the gun town of Darra Adam Khel. The Afghans he was with said they wouldn't issue him a weapon, so he made them stop and he bought a 9-millimeter Makarov pistol because, as he put it, by golly, he was going to shoot at a Russian if he saw one.

They got into Kurram Agency on the way to the town of Parachinar and an Afghan that he knew came from the other direction. The Afghan said in effect, "Congressman, it is too dangerous, you can't go down here. The Shia and the Sunni are fighting; there is communal unrest, you can't go, you have to turn around."

This was an Afghan of some note, and after arguing for a while, Charlie turned around and came back to Peshawar. Well, it was very clear what had happened and Charlie very well knew what had happened.

The Pakistanis didn't want him to go and they had set up this elaborate scenario to keep him from reaching the border in the company of this Afghan leader.