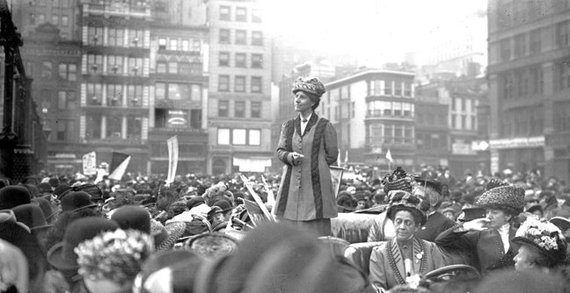 No celebration of Women's History Month would be complete without acknowledging the extraordinary achievements of Charlotte Perkins Gilman. In the late 1800s and early 1900s, Gilman was the most important feminist thinker in the United States. She laid the groundwork for later feminists like Simon de Beauvoir, Betty Friedan, Gloria Steinem, Germaine Greer, Kate Millett, Shulamith Firestone, Susan Brownmiller, Rita Mae Brown, bell hooks, Barbara Ehrenreich, and Kimberly Crenshaw. Gilman combined economic and sociological writings with fiction and utopian thinking, giving her a broad appeal. Her lectures, novels, short stories, magazine articles (including her best known work, "The Yellow Wallpaper"), and nonfiction books challenged the dominant ideas about women's role in society and helped shape the movement for women's suffrage and women's rights. Some of her radical ideas are now considered common sense, but even today some of Gilman's views test our willingness to think differently about gender, family, and work.

Despite this impressive bloodline, Gilman grew up in a poor family in Providence, Rhode Island. Her father abandoned his wife, who had to depend on family charity and was forced to move frequently. As a girl, Gilman wrote stories in her diary that typically involved a young woman who -- often through some magical device -- overcomes the limits of her life. With an older woman as her guide, she achieves personal salvation and overcomes evil in society. These themes -- of independent women surmounting social boundaries, not simply as individuals but as part of a broader social reconstruction -- appear in Gilman's influential writings throughout her life.

Gilman briefly attended college, married Charles Stetson, an artist, in 1884, and gave birth to her only child the following year. Before they married, Gilman insisted that Stetson agreed to never expect her to cook or clean and never require her, "whatever the emergency, to dust." But Gilman felt hemmed in by the marriage and soon fell into a severe depression, suffering what today we would call a nervous breakdown. She entered a sanitarium in Philadelphia to undergo the "rest cure," a controversial treatment that prohibited intellectual stimulation and most forms of physical activity.

In 1888, she moved to Pasadena, California with her daughter and got a divorce, a bold and scandalous decision at the time. The move helped her recover from her emotional trauma. While living in Pasadena she wrote an autobiographical short story "The Yellow Wallpaper," published in 1892, that described a woman who suffers a mental breakdown after three months of being trapped at home, hallucinating as she stares at the patterns on the yellow wallpaper. The story was a powerful statement about the restrictions domestic life placed on women and had a significant influence in women's circles. It is Gilman's most famous work, still discussed in many college courses. 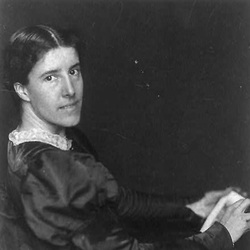 To earn money and pay back her debts, she began writing stories and poems, publishing them in various journals and magazines. She worked for a time as an editor and writer for Impress, the organ of the Pacific Coast Woman's Press Association. She briefly moved to Chicago to live at Hull House, the epicenter of progressive reform founded by Jane Addams. Gilman was one of many people inspired by Edward Bellamy and his utopian novels Looking Backward: 2000-1887, published in 1888 and set in a socialist America in the year 2000, and its sequel, Equality (published in 1897).

Gilman soon became a popular lecturer, traveling around the country talking to women's clubs, social groups, and workingmen's associations, where she not only discussed Bellamy's radical ideas but also talked about women's issues. Gilman could not take her daughter with her on the road, so she put the girl in the care of her ex-husband -- a decision that was reported in the newspapers and was considered scandalous. In 1900, she married her first cousin, Houghton Gilman.

Gilman was probably the most effective debater among suffragettes of her era. At Susan B. Anthony's invitation, she addressed the 1896 conference of the National American Woman Suffrage Association in Washington, DC and testified before Congress in favor of women's suffrage. Later that year she traveled to London to speak at the International Socialist and Labor Congress, where she met George Bernard Shaw, Beatrice and Sidney Webb, and other major socialist thinkers and activists,

As a writer and lecturer, she popularized new ideas about women's equality. Her book Women and Economics: The Economic Factor Between Men and Women as a Factor in Social Evolution (1898) garnered international attention. She followed this controversial book with The Home (1903), Human Work (1904), and The Man-Made World (1911), which all furthered her reputation as a bold thinker and entertaining speaker.

In the debate over gender equality, Gilman's views were somewhat ambivalent. At times she contended that women and men shared a common "humanity," but at other times she argued that women's essential nature was superior to that of men -- more nurturing and cooperative.

Gilman argued that maternal skills were not natural and that women needed training to be good mothers. "The ideal woman," Gilman wrote, "was not only assigned a social role that locked her into her home, but she was also expected to like it, to be cheerful and gay, smiling and good-humored." She skewered what she considered a male-centered culture for oppressing women in many ways -- including in its limited views about women's "beauty" and clothing (such as corsets and high-heel shoes).
Gilman believed that women would be equal to men only when they were economically independent.

The unpaid labor that women perform in the home -- child rearing, cooking, cleaning, and other activities -- was, she believed, a form of oppression. Society had to accept the idea of women, even married women, having careers. She encouraged women to work outside the home and maintained that men and women should share housework. But she went further, arguing that marriage itself had to be modernized to meet new realities. As much as possible, she believed, housekeeping, cooking, and childcare should be done by professionals, not by biological parents. To Gilman, the very idea of "motherhood" was outdated in a modern society. Children, she believed, should be raised in communal nurseries and fed in communal kitchens rather than in individual homes. Girls and boys, she thought, should be raised with the same clothes, toys, and expectations.

Some of Gilman's fellow feminists tried to put her ideas into action. For example, in 1915, after a lobbying campaign by the Feminist Alliance, New York City's school system changed its policies and permitted women to continue teaching after they married and even after they had children.

Between 1909 and 1916 Gilman wrote and published The Forerunner, a socialist magazine devoted to women's emancipation and radical social change. There she published many of her own essays, articles, and stories and serialized seven of her novels.

In 1912, Gilman published her poem "The Socialist and the Suffragist," in Appeal to Reason, a socialist newspaper that had a paid circulation of more than half a million people. At the time, both socialism and feminism were gaining headway as progressive movements for change in America. The poem is perhaps the most well-known testimonial to the ongoing debate about the role of both workers' rights and women's rights as part of the struggle for human emancipation. In the poem, Gilman imagines a conversation between a socialist and a feminist. Its final verses offer reconciliation between the two:

'A lifted world lifts women up,'
The Socialist explained.
'You cannot lift the world at all
While half of it is kept so small,'
The suffragist maintained.
The world awoke, and tartly spoke:
'Your work is all the same:
Work together or work apart,
Work, each of you, with all your heart --
Just get into the game!'

In Gilman's utopian novel Herland (1915), the author visits an island community of women organized around the principle of New Motherhood, where cooperation in all spheres of life has replaced male domination, competition, and war. That same year, in her real life, Gilman was among the prominent women (led by Jane Addams) who founded the Woman's Peace Party to protest against World War One

In 1932 Gilman was diagnosed with breast cancer. Three years later, at age 75, she committed suicide, explaining that she "preferred chloroform to cancer." In her suicide note, published in the newspapers at the time, she wrote: "When all usefulness is over, when one is assured of unavoidable and imminent death, it is the simplest of human rights to choose a quick and easy death in place of a slow and horrible one." She died at her daughter's home in Pasadena.

Peter Dreier is the E.P. Clapp Distinguished Professor of Politics and chair of the Urban & Environmental Policy Department at Occidental College. His most recent book is The 100 Greatest Americans of the 20th Century: A Social Justice Hall of Fame (Nation Books, 2012).