Some high school seniors choose yearbook quotes to reflect on the last four years. Some choose quotes to set an inspiring tone for the future. Chloe Cross chose one to leave a lasting impression about sexism.

The 17-year-old used her quote in San Mateo High School's yearbook to fight back against school dress codes that often include unfair guidelines for female students.

The quote reads: "I would just like to apologize to those who were unable to graduate with the class of 2015 because they were too distracted by my midriff and consequently failed all of their classes! xoxo"

Chloe explained that the quote made it into the yearbook because she knew a classmate working with senior quote submissions. She said that the idea for the quote came to her from the notion that female students' clothes are somehow responsible for the "academic failures of others."

"There is no correlation between how much skin you've seen and how well you do in school, it just doesn't make any sense," she said in an email to The Huffington Post. "Sending a girl home to change or forcing her to miss part of class to find other clothes is hurting her education more than her outfit was hurting the education of those around her, and I wanted to point that out in a sarcastic way because that's in character for me."

Chloe posted a photo of her quote on Instagram as well as Tumblr, where it was reblogged by "The Hunger Games" actress Amandla Stenberg. The post has been liked and reblogged more than 68,000 times.

Though the fake apology has a sarcastic tone, Chloe's quote is no joke. She told Yahoo Canada it's a message to her school and others about the sexism demonstrated through dress codes.

"I wanted to leave behind something meaningful and important to me as my senior quote, so that people would remember me as the girl who gave the administration hell until the last possible moment. Why shouldn't I have said something that makes people think about why they blame girls for distracting boys instead of boys for lacking the self-control to remain on task?"

And that's how you make a memorable exit from high school. 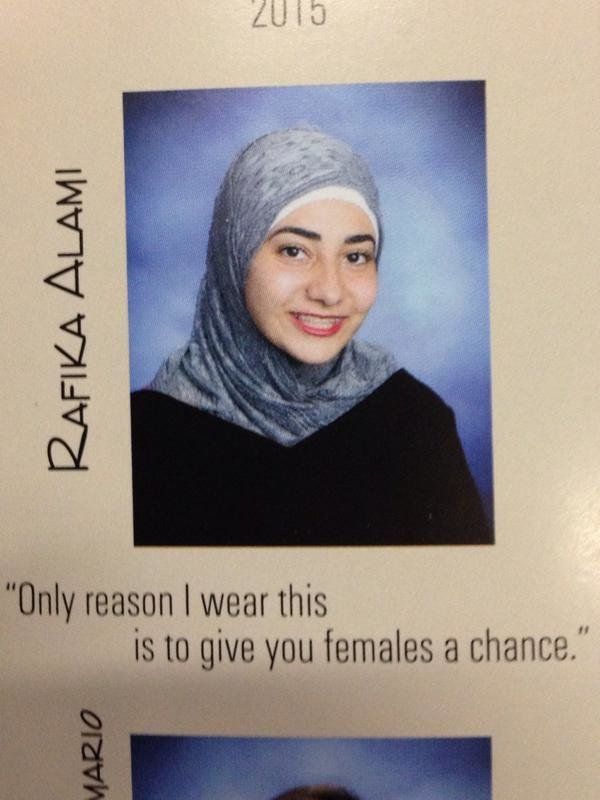