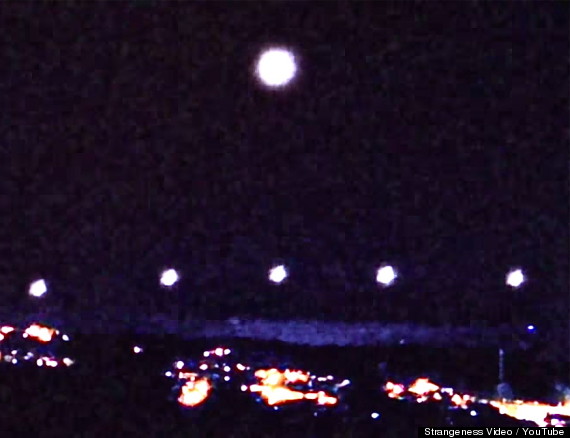 This video will finally make you believe -- that video editing software has come a long way.

There are a slew of inconsistencies in this UFO video, reportedly shot in Massachusetts. It's unclear exactly when, where and by whom it was created. Shortly after the original video was posted, it was removed from YouTube "due to a copyright claim by Die Hoaxer."

It all started with a YouTuber named Bobby Johnson, who wrote on his page that he videotaped UFOs from a rooftop in western Massachusetts. It shows a large, circular glowing orb hovering above street lights, homes and traffic.

As the video progresses, one by one, the large orb seems to drop or release smaller versions of itself down toward the ground. But, instead of hitting the ground, each of the small orbs stops, hovers and then moves to the left or the right, taking up positions in the sky until a total of six objects are just sitting there.

The two end objects move horizontally left and right away from the others, leaving three smaller orbs, hovering in the air below the initial still-hovering large light. Then, the two remaining end orbs move slowly away, with just one small glowing object hanging in the air underneath the larger one. Finally, the large UFO moves slowly down and merges with the small one.

The video ends with the large object growing larger in its glow until it finally, simply, vanishes, turns off, gone (see composite photo below). 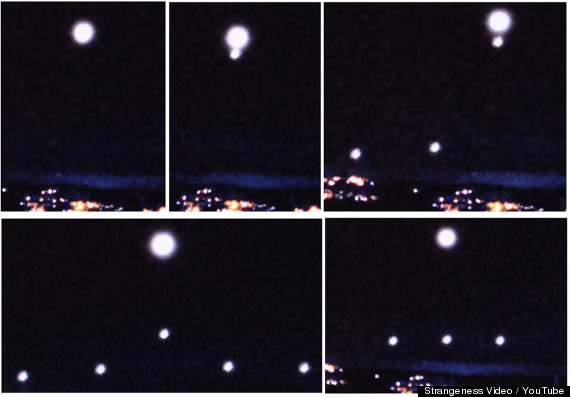 And then there's the accompanying audio track of the video. We hear voices of several people, but if you listen carefully, they don't always seem to react to what we're seeing on the screen -- almost as if the audio portion of the video comes from another UFO case and was added to the video at a later point.

If this is a video of an actual occurrence in the air, it's also a bit odd that the videographer himself doesn't seem excited in the least at what he supposedly is capturing on tape.

Further convoluting the whole issue is that earlier on Thursday, a YouTube video appeared, posted by someone named HOAXKiller1, outlining in detail why the UFO video is a complete fabrication. As the day progressed, HOAXKiller1's video was removed from YouTube, with the following message: "This video is no longer available due to a copyright claim by richard simmons."

We're already tired of these orbs.

HuffPost reached out to Marc Dantonio and Ben Hansen, two guys who have spent years analyzing UFO images and videos and often share their opinions of UFO cases with us.

"When you take a scene at night, like this, of point lights, and you are hand-held, as this is purporting to be, then distant light sources and street lights might/should be occluded at one point or another by other objects, such as a tree branch," Dantonio told HuffPost in an email.

"Even if you are on a tripod taking imagery of this many lights, you would expect some variation in the lighting because that is the reality of capturing video through any air mass at all. You always see lights that will scintillate, especially the farther away they are."

That probably explains why no traffic movement is noticeable in the UFO video.

"The video was most likely created on computer software and then filmed off the computer or a TV monitor," Hansen told HuffPost.

"Some hoaxers will do this because it's an easy way to simulate camera shake and to cause the camera to adjust focus in a more natural way as you would expect if this really happened on camera."

"It's evident the audio was ripped from other sources as demonstrated by the reaction of the woman toward the end who exclaims, 'It's orange! It's orange!' Never at any time did the UFO objects in question turn any shade of orange. They remained bright white throughout the sighting. In law enforcement, we call this a clue."

You'd think, by now, that when someone decides to post their photo gems to YouTube, they would automatically offer basic information to help solicit more videos or photos taken by others from different vantage points or perspectives. All in the name of trying to confirm the credibility of the images and stories in question.