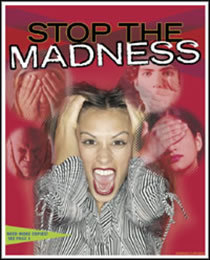 You just can't script this stuff... er... Or maybe you can (but shouldn't) and that's exactly what happened. Talk about propping up a wingnut talking point. Is there something in the air? First Obama, next Edwards and now Clinton. Somebody grab these people and take them on vacation.

She tweaked my tolerance when in front of the VFW Clinton said this: "... .. We can't be fighting the last war; we have to be preparing to fight the new war." I gave her hell for it for good reason. First, I can't stand the "global war on terror" talking point. Secondly, pandering to an audience is one thing, but how about stopping any new war instead of always using language like being ready to "fight it," which we've proven over the last century we're more the eager to do? Muscular diplomacy has simply got to be the mantra out of Democrats, because Republicans sure aren't going that route. Let me also add that I understand fully that a woman running for commander in chief has to have muscular rhetoric, which I've written about at length.

But it's hard to know where to begin with Clinton's latest rhetorical bomb.

"It's a horrible prospect to ask yourself, 'What if? What if?' But if certain things happen between now and the election, particularly with respect to terrorism, that will automatically give the Republicans an advantage again, no matter how badly they have mishandled it, no matter how much more dangerous they have made the world," Clinton told supporters in Concord.

"So I think I'm the best of the Democrats to deal with that," she added.

HILL: TERROR WOULD BE GOP BOOST

An attack "will automatically give the Republicans an advantage again"? It's the New York Post, but the quote is obviously correct or we would have heard early push back from the Clinton camp on it.

We haven't worked all these years, including during the '06 elections, to prove Democratic prowess on national security to hear one of our leading candidates for president talk trash about that image. To say effectively that our foreign policy bona fides are less in times of national peril, while using rhetoric that favors the fearmongering Republican foreign policy supremacy script. It is a gift to the other side. So why serve up a Republican line? So candidate Clinton can say she's beaten the wingnuts back before and she can do it again, especially when our vulnerabilities are tapped. Underground message: She's strong. It's just the Democratic image that is not, but not to worry, Clinton can save us.

Nice try. But no.

How about saying this instead: What if? What if? Republicans think terrorism and national security are their issues. Not anymore. Between their incompetence in Iraq and what they've done to our military, our country is more vulnerable than ever. Terrorism and national security no longer belong to Republicans. So if, God forbid, the worst happens the American people won't automatically turn to Republicans, though they'll try to make that point by telling everyone to be afriad. But I know how to fight these fights and I'm the best of the Democrats **blah-blah-blah**.... ..

Again, I understand that a woman running for commander in chief has to sound tough, but channeling Mr. 9/11's script? This pandering hawkery needs to stop.

However, something tells me it won't, especially with Clinton's poll numbers set on high. She's running a general election campaign at this point and Republican and scaredy cat voters eat this stuff up. But will Democratic primary voters?

Then there's the cleavage in the room issue, to use a favorite hack pack picture. Is this how a woman has to talk to get herself elected commander in chief? The obvious answer to that question is depressing, especially since Clinton obviously believes the answer is yes.