The Dutch actress and goodwill ambassador for Unicef, Nicolette Van Dam, published an unfortunate tweet that offended the Colombian fans who follow the World Cup in Brazil. Van Dam posting a photomontage of two players from the Colombia team, kneeling on the field and snorting the white powder used by referees to mark the field during games. 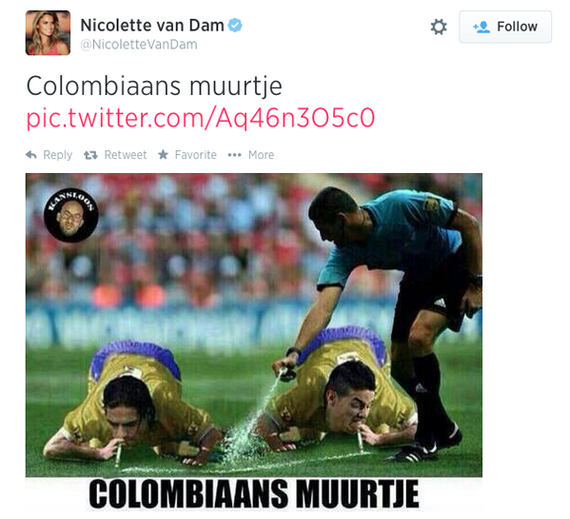 The tweet caused thousands of Colombians from all over the world and the Ministry of Foreign Affairs of Colombia to demand Van Dam's immediate removal from Unicef considering the photomontage as a serious offense. The next day Unicef issued a statement disapproving Van Dam's tweet apologizing to players James Rodriguez and Radamel Falcao and announcing that the goodwill ambassador withdrew from the organization. 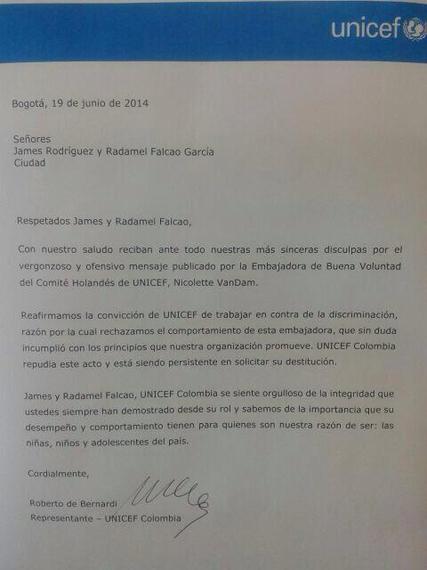 After the scandal some people have said on social media, that they don't understand why Colombians don't know how to take a joke, which motivated me to write this article and to explain why Colombians are tired of this old stereotype everywhere they go.

Because of terrorism and violence brought upon Colombians by drug wars, my family and I have never experienced peace in our country. That is why there is a sense of extreme frustration that overwhelms us. Colombians are not associated with drugs just because we were born in Colombia.

And you might wonder: "Why was Mrs. Van Dam's tweet was so offensive for Colombians? Why do we repudiate the stereotype?" Because my country has been leading the global fight against production and trafficking of drugs for over 30 years:

Colombia is currently one of the most promising nations in Latin America, with growth in tourism, foreign investment, education, a peace process that will soon begin to bear fruit and a soccer team that makes us proud.

Colombia is an "open door" country, with a colorful and diverse culture, and Colombia is a country that is expanding its international recognition through global business, sports and the arts as evidenced by talents such as Shakira, Sofia Vergara, Gabriel García Márquez and John Leguizamo.

Colombia is a place where we breathe fresh air, climb green mountains, enjoy two oceans and multi-colored rivers, plains, snow and desert. Colombia is a leading provider of coffee, orchids and emeralds.

Proudly, Colombia is the country where I was born, my home, and as all Colombians, we wish for mutual respect and consideration with our international brothers and sisters.