The House Foreign Affairs Committee will hold hearings today on the disturbing rise of anti-Semitism in Europe. In a pre-hearing interview with the Jewish Telegraphic Agency, sub-committee chairman, Rep. Chris Smith (R-N.J.), said that anti-Semitism "is getting demonstrably worse all over the world, but especially Europe ... The Middle East is a cauldron of anti-Semitic hate, but much of that hatred is spilling out through the Muslim Diaspora and through satellite television."

Rep. Smith is correct that there has indeed been a substantial increase in violent attacks by Muslims on Jews in a number of European countries during the past few years; including the shocking and horrific shooting rampage by an Islamist extremist at a Jewish school in Toulouse, France last March that left three children and a rabbi dead. This is a grim reality that must be acknowledged on both sides of the Atlantic, and the House Sub-Committee on Human Rights deserves credit for addressing it. Yet less known is a far more encouraging development; that increasing numbers of European Muslim leaders have begun speaking out forcefully and unequivocally against such acts as being morally abhorrent and counter to Islamic law and values. Many of the same Muslim leaders have also reached out to their European Jewish counterparts to stand together against anti-Semitism, anti-Muslim bigotry and xenophobia and join forces to defend ritual practices sacred to both communities -- such as circumcision and ritual slaughtering -- which have been under legal or legislative assault in a growing number of countries.

The Foundation for Ethnic Understanding has been working globally since 2007 to nurture ties of communication, reconciliation and cooperation between Jews and Muslims. In Europe, we co-sponsored conferences in Brussels and Paris in 2010 and 2012 where scores of Muslim and Jewish leaders from 20 countries across the Continent met to discuss how to work together for the benefit of both communities. At the most recent Gathering of European Muslim and Jewish Leaders held in Paris last September, Muslim and Jewish participants issued a Declaration of Zero Tolerance for Religious Bigotry; vowing to denounce clerics -- including within their own communities -- who denigrate other faiths.

In the wake of the killings in Toulouse, large numbers of French Muslims took part in interfaith demonstrations and candlelight vigils in Paris, Marseilles, Nice, Lyon, Strasbourg, Grenoble, Bordeaux, Dijon, Lille and other cities. Major French Muslim organizations, including the French Council of the Muslim Faith and the Great Mosque of Paris, strongly condemned the attack as being antithetical to the fundamental precepts of Islam. Working through organizations like the Amitie Judeo-Musulmane de France (Jewish-Muslim Friendship Society of France), many French imams have made trips to Auschwitz and subsequently issued moving statements denouncing Holocaust denial. In a compelling gesture of reconciliation, 15 French Muslim leaders followed the lead of 10 American Muslim leaders in sending an open letter to the chairman of Hamas, Khaled Mashal, urging that Israeli prisoner of war Gilad Shalit, who had been held as a prisoner by Hamas for more than five years, should be released on humanitarian grounds. Shalit was released just over a month after the letters were dispatched.

Yet the positive developments in France are only part of the story. The willingness of European Muslim leaders to speak out publicly against violent anti-Semitic attacks carried out by their co-religionists began in the United Kingdom in January 2009, when in the wake of an upsurge of attacks on Jews by Muslims during the Israel-Gaza war of that year, more than 20 prominent British Muslims signed a joint letter denouncing anti-Semitic attacks and calling for continued Muslim vigilance against anti-Semitism.

In 2011, after Muslim youths baited a Jewish teenager on an Amsterdam street corner with taunts and Hitler salutes, Said Bensallem, a leader of the Dutch Moroccan community organized scores of Muslim youngsters to join their Jewish counterparts to help clean up an 18th century Jewish cemetery that had fallen into disrepair.

In Germany, leaders of the Central Council of Muslims expressed revulsion last August after a rabbi and his small daughter were accosted by Arab youths in Berlin. Earlier this month, leading Muslim and Jewish leaders gathered in the German city of Osnabruck for an event in which they strategized on how to work together to combat anti-Semitism and anti-Muslim bigotry.

In Italy and Bosnia-Herzogovina, inspirational Muslim leaders like Imam Yahya Pallavicini and Grand Mufti Mustafa Ceric have been unrelenting in denouncing anti-Semitism and providing leadership to the Europe-wide movement for Muslim-Jewish friendship and trust. Even in distant Ukraine, leaders of the Jewish and Tatar Muslim communities have joined forces in the Crimean autonomous region to denounce Slavic extremists who have targeted both the Jewish and Muslim communities for incitement.

In short, the greatly increased willingness of European Muslim leaders to denounce attacks on Jews and work with authorities to prevent future occurrences is a vital component in combined efforts to protect the security of Jews across the continent. At the same time, the determination of Muslim and Jewish leaders to cooperate in a joint battle against religious bigotry and to work together on issues of mutual concern represents a "win-win" for both communities and for the diverse European societies in which Jews and Muslims live side by side. 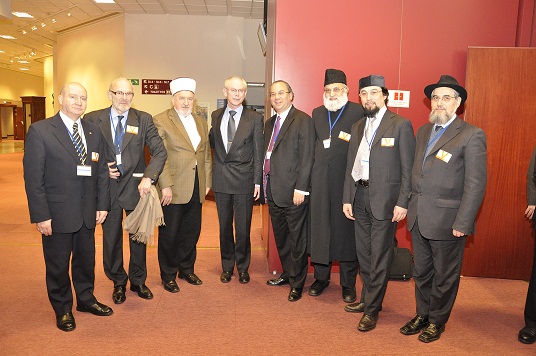 Rabbi Marc Schneier, president of the Foundation for Ethnic Understanding (fourth from right) and Herman Van Rompuy, president of the European Council (fourth from left) with leading rabbis and imams from around Europe standing together against anti-Semitism and anti-Muslim bigotry at 1st Gathering of European Muslim and Jewish Leaders in Brussels.