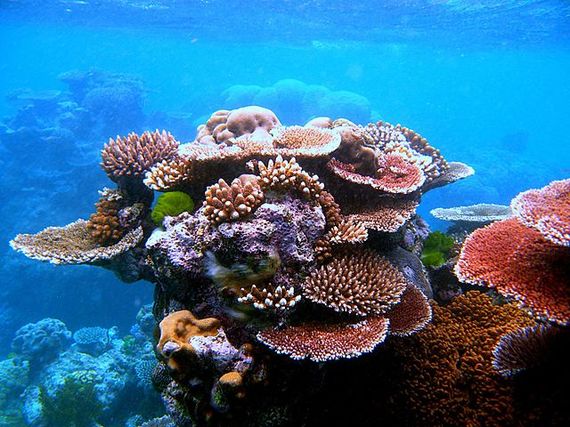 Snorkeling in the Great Barrier Reef a few years ago, I was overwhelmed by the cartoon-like colors: orange clownfish, blue tangs and green sea turtles set against corals that were purple, bright yellow, rusty red and aqua-blue.

It was like swimming into a Dr. Seuss book, a fantastical scene that was rich and alive. I saw a giant clam covered in a rough lavender sheen, the orange edges of its shell like smiling lips. Even the branching coral shoots were a striking shade of blue, translucent and almost glowing.

But today this brilliant world has been drained of its color -- and much of its life -- by a coral-bleaching episode of massive proportions. A new study finds that 93 percent of the Great Barrier Reef, the most iconic and celebrated reef on the planet, suffers some level of bleaching. It's hard to wrap your head around the size of the reef, but the new study estimates that bleached coral stretch across more than 1,400 miles -- about the distance from Los Angeles to Dallas.

We're all to blame for what's happening to the reef. Record warm ocean temperatures and poor marine-management practices have stressed corals and caused them to expel the resident algae that create their hues and provide part of food they need to grow and reproduce.

The result is a Technicolor world of life rendered dead, a haunting black-and-white nightmare.

I've seen bleached corals before, while snorkeling down in the Caribbean about 10 years ago, including rubble left over from reefs permanently damaged in 1970s bleaching, never to return to their former colorful glory and vigor.

We must reduce our carbon emissions and put the brakes on global warming. This mass bleaching is evidence that dangerous climate change is already upon us. The sooner we act on climate, the faster we'll see results, but some scientists believe we are already passed a critical point.

Australia is one of the world biggest consumers and exporters of coal, the very worst fossil fuel in terms of carbon emissions and ocean warming, so there's a cruel sort of poetic justice in what's happening to the region's coral reefs.

The Great Barrier Reef is a natural feature that helps define our planet -- one that can be seen from space. We need to take the long view and act now to save it for future generations.

Dr. Seuss warned of a bleak future if we allowed the Once-ler to cut down all the Truffula trees to make Thneeds for the masses, and that fable applies to the health of oceans as well. If we can't stop turning oil and coal into the pace and gadgets of modern consumer life, then we'll find the brilliant colors drained from our coral reefs and the vibrancy of the natural world terribly dimmed.