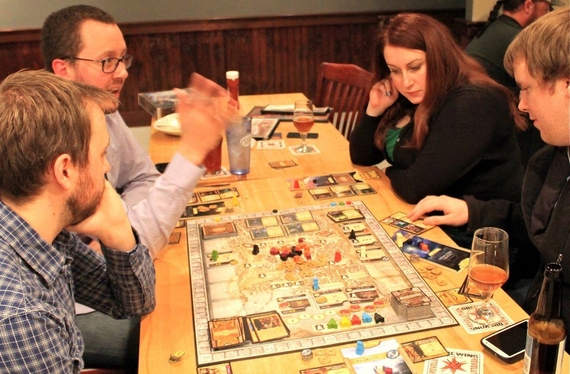 The craft beer industry is booming to the tune of $19.6 billion and at every taproom, brewing and brewpub there are craft beer fans on their phones. From Untappd, craft beer's leading social media platform, to NextGlass, which helps beer noobs find something else they'll like based on algorithmic recommendations, screens and phones are omnipresent. it's a veritable #socialanalog

That's part of what led Colorado's New Belgium Brewing Company to launch its Beer Mode app. The app, when activated, lets users put down their phone and enjoy a beer. "Activate Beer Mode and we'll automatically post preselected messages to your social networks so you can give beer your undivided attention."

The Geek Shall Inherit The Earth

Beer, by its very nature, is social and there is a trend among some craft beer drinkers to gamify that social experience but not with apps or red plastic cup drinking games. These folks are making old-school gaming -- card games and board games -- new again.

"Beers and board games are both extremely social in nature, so it only makes sense to combine them," says Cheryl Harrison, organizer of the Beers & Board Games Club in Columbus, Ohio. "Especially when meeting new people, a beer or two can help everyone relax and have a better time while sitting down to conquer a game together."

Harrison's Beers & Board Games Club, founded in 2013, boasts more than 250 members who gather monthly at different breweries or beer bars to drink and play.

"Play is proven to enhance creativity and happiness, but no one ever takes the time to 'play' as an adult," Harrison says. 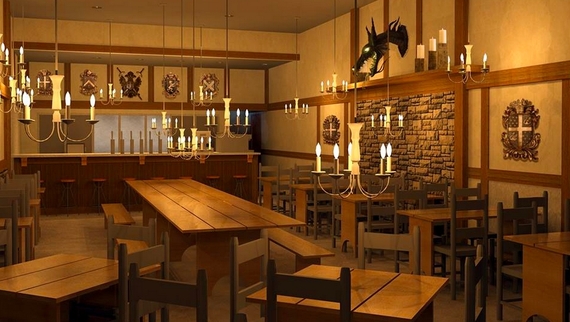 A Haven For Geeks, Gamers and Beer Fans

In February the Kickstarter campaign for Dungeons & Drafts -- described by co-founder Manny Garza as a "Medieval-themed, board game, vegan gamer tavern" -- exceeded its funding goal of $9,600 in 6.5 hours. In total, the campaign raised nearly $58,000 from over 700 backers to bring the gaming-centric, beer-focused tavern to life.

We're talking a mere board game, here, people. The very definition of #SocialAnalog.

"For too long geeks have had to endure noisy sports bars and venues without readily accessible polyhedral dice just to have a drink with friends. Well, no more! Dungeons & Drafts is here to provide geeks from all walks of life with a welcoming place to call their own, kick back with a pint, and play a game with friends," the Kickstarter campaign boasted.

We just passed the 1,000 mark on attendees for our Grand Opening. Brace yourselves....


Dungeons & Drafts will feature an extensive board game library and video games, as well as a menu of Medieval and Old-English themed foods. They will also offer vegan, gluten-free and vegetarian menu choices, as well as a drink menu featuring locally curated beers from Colorado, cider, meads, and game-themed cocktails. Manny and Melissa Garza's "geek tavern" is set to open in June in Fort Collins, Colo. - with more than 1,000 people having RSVP'd for the opening night. 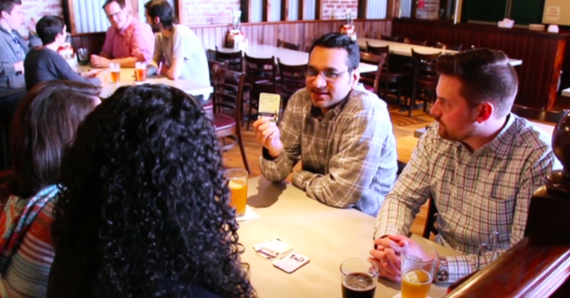 If Giving Up Cheese Made You Immortal, Would You Do It?

The "immortal cheese question" from the card game Thinking & Drinking has people debating between eternal life and cheddar, mozzarella and gouda, says the card games creator Jonathan Cooper. "People always want to negotiate when this question is asked. They always want to trade years of their life for pizza," says Cooper. Cooper is the co-creator of Thinking & Drinking, a card game featuring more than 300 questions that's designed to get people talking while they're out enjoying craft beer. In fact, each card also features the profile of a U.S. craft brewer.

"We just wanted to introduce people to breweries that they might not yet know," said Cooper. "Gaming and beer are perfectly matched because they're both great social lubricants."

There's also a wide-range of beers profiled in the game including a jalapeno porter called Feugo by Twisted X Brewing Company in Texas, a Maple Bacon Coffee Porter by Funky Buddha Brewery in Florida, and the Fussy Sipper Pumpkin Peach Ale from Smokehouse Brewing Company in Ohio. 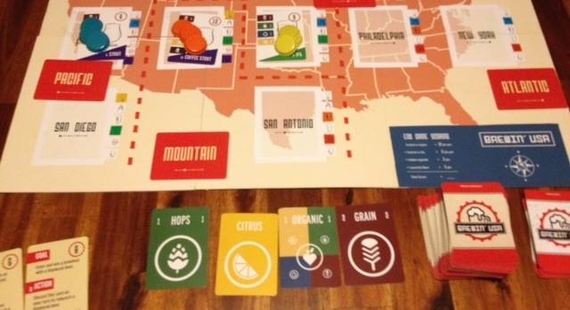 Brewin' USA simulates craft brewing from making the beer to distributing it across the U.S.

Starting Your Own Brewery - The Game

When Adam Rehberg set out to create Brewin' USA he wanted to take everything that goes into craft brewing -- the barley, the hops, the production and distribution -- and get it into a single board game.

"I started brewing about 10 years ago as more of an engineering-nerdy-thing, which opened my eyes to craft beer. There is something about the brewing process that makes it a very fulfilling process," says Rehberg. What he managed to do is take that four to eight week brewing process and distill it down into a tabletop board game that pits players against each other for ingredients and marketshare -- it's like Risk and beer had a baby.

In Brewin' USA players are tasked to become the best brewery in the country by competing for resources, brewing beer and even fulfilling the ever-growing demand for the -- fictional -- beer. "I like the problem solving and challenge most about games," says Rehberg, noting that he was "definitely challenged to make the game an extremely solid representation" of the craft brewing process.