If you are walking through the East Village, you may find a group of street wanderers that seem to stick out from the rest. Those with tattoos and spikes, piercings and Dr. Martens, torn jeans and fading neon hair. These, photographer Steven Hirsch says, are the Crustypunks.

"Crustypunks are a tribe of tattooed nomads found in Tompkins Square Park," he writes on his website. The term describes a sort of street punk or squatter, a roaming subculture heavy on the 'crust' (as in what results from not bathing). "I always found them visually fascinating," Hirsch tells HuffPost, "I globe-trotted extensively when I was in my twenties and have a certain affinity for their traveling ways."

Toward that end, Hirsch started a project to capture candid portraits, letting them tell their stories. Some are down on their luck, living from fix to fix on the sidewalk, but in fact most say they have chosen the liberty of the wandering life over more sedentary options. What one subject, T-bird, describes as "living the free life." "I have no desire to do anything ever," he continued. "I'm completely content doing nothing and living off the excess of other people."

"I've tried to settle down," says Kayla, another subject. "Can't do it. I'd just rather sleep under the stars."

But it's not all On The Road optimism. Many struggle with heroin addiction and can't seem to land on their feet. "It's a much darker scene now than it was even two or three years ago," Hirsch says.

Hirsch has a similar project called Courthouse Confessions, where he approaches people leaving court and asks them what they're in for. It's definitely worth a look.

Check out a few examples of his portraits below, and visit his website for more stories.

Crustypunks, The Wandering Nomads Of The East Village (PHOTOS)
Gallery 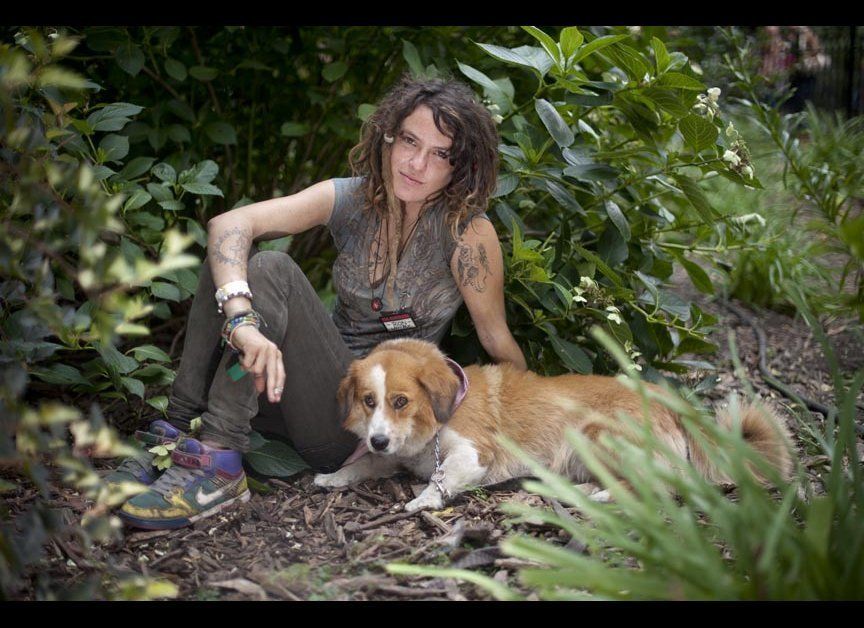 1 / 7
Skamper
I've been on the road, this is my fourth year. But on and off, you know I tried going back to school. Tried living in a house a few times. It's just garbage. It doesn't work for me. I windup getting into way too much trouble and or just going insane in my own brain cause I can't handle all that bull crap....