In this video we attend the opening of Mexican artist Damián Ortega's solo exhibition Casino at HangarBicocca in Milan, Italy. Curated by HangarBicocca's artistic director Vicente Todolí, the show offers an overview of the artist's work that is characterized by the use of simple or recycled materials. On display are sculptures, installations, and films. On the occasion of the opening, Ortega's performance Moby Dick was presented, a work that is part of his Beetle Trilogy. The Beetle Trilogy revolves around the iconic Volkswagen Beetle car and includes a dismantled Beetle (the installation Cosmic Thing), a buried Beetle (the film Escarabajo), and a man "fighting" with a Beetle while the Led Zeppelin song "Moby Dick" is played. We had the chance to speak with the artist before the opening of the exhibition. In this interview, Damián Ortega talks about the basic concept of the show, the Beetle Trilogy, and his use of everyday objects and materials.

The exhibition at HangarBicocca runs until 8th November 2015. In addition to the Beetle Trilogy, the show presents works such as Controller of the Universe, an explosion of tools such as saws, pickaxes and rakes, a piece that expresses the artist's skepticism of blind trust in technological innovation, which time transforms into old-fashioned, obsolete forms; and Hollow/Stuffed: market law, a small replica of a submarine with biodegradable plastic sacks full of salt hanging from the ceiling on steel cables. 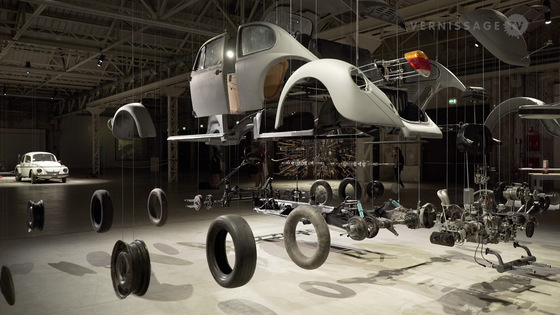