Here's one great by-product of the web for print media: The opportunity to loose your funniest reporters on the medium and see what the heck happens next. David Carr became an unlikely star at the NYT with his Carpetbagger dispatches from the film circuit, and was so successful that they sent the Bagger out on the convention circuit, film crew in tow. At Time, SwampCasts with Ana Marie Cox and PageCasts with Mark Halperin have gained followings; at WaPo, Chris Cillizza's "FixCam" has found another platform to channel the author's obsession (perhaps when his fingers can legitimately type no more). Over at Politico, that's pretty much what James Kotecki does: make videos uploaded to the helpfully-free platform of YouTube (when he's not actually making videos himself, he blogs about them).

All this by way of giving kudos to these print outlets for making lemonade out of lemons — and nowhere was that more apparent at the RNC than in Dana Milbank's hilarious, smartly constructed video at the RNC about "Easter Media Elites." Not only was it a great and timely response to the ludicrous attacks on the media by the GOP, but it's a hilarious use of WaPo resources (especially David Broder, the use of whom in a spoof of Eastern media elites is itself a punchline).

More than that, the brief, affable moment with Mitt Romney reveals the hypocrisy in the GOP position by showing the generally friendly pol-press relationship — something of a by-product of living and working in D.C. and constantly being in the same political petri dish together. Does being friendly mean you're in the tank? Of course not. Does being unfriendly make you a reformer? No, though it may evince a certain regret for bygone birthday parties. Upshot: it's a smart and funny send-up, with an extra twist of the knife that makes it hard to miss the point.

I was on the convention floor when Milbank was filming this piece. Too bad he's so camera shy. 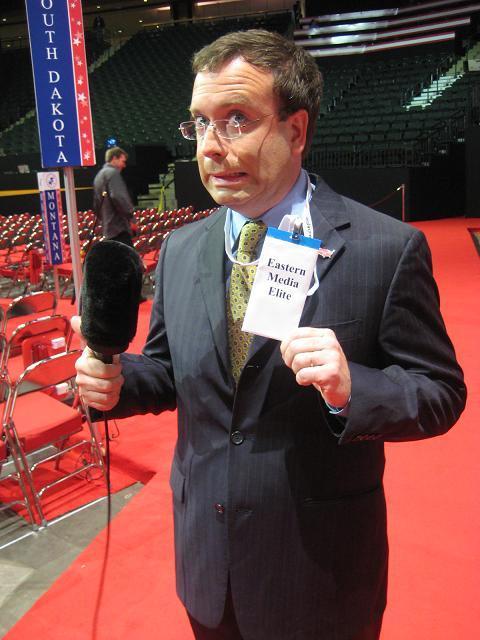 (Via Karen Tumulty, who cameos in the video and who has also gained worldwide fame for her appearance on "My First Convention." If you doubt, consider this moment on the shores of a remote Canadian lake on Friday night: A man, watching "The O'Reilly Factor," sees Tumulty and exclaims to his daughter, "Hey! I saw her on "My First Convention!" And Tumulty wasn't the only one. Oh, those eastern media elites are everywhere.)