The Detroit Institute of Arts collection will be appraised by New York auction house Christie's, according to a report from the Detroit News.

The paper reports that on Monday, the city's emergency manager Kevyn Orr will announce the hiring and decision to evaluate the city's world-class collection in light of its bankruptcy filing.

Detroit filed for bankruptcy in July, claiming it owes bondholders, workers, pensioners and other creditors at least $18 billion. As the city prepares for an eligibility trial in order to proceed through bankruptcy, many have alleged that valuable assets like the city's prized art collection could be sold off by the city to pay its debts -- despite denials from the museum's leadership and outrage from the art world.

Orr has repeatedly insisted that he has no plans to sell DIA art, but has also said that everything is on the table.

Though not likely to hit $18 billion, the masterpieces in the collection could be worth well over $1 billion. In consultation with experts, the Free Press found the 10 most valuable pieces ranged in value from $30 million for Nicolas Poussin's "Selene and Endymion" to $150 million for Henri Matisse's "The Window." Others have made the point, however, that pieces of such high value rarely come to auction, and therefore could flood the market.

Orr said in a statement obtained by the Detroit News that the appraisal is meant to aid the restructuring process.

"This valuation, as well as the valuation of other city assets, is an integral part of the restructuring process," Orr said. "It is a step the city must take to reach resolutions with its creditors and secure a viable, strong future for Detroit and its residents."

According to the Detroit Free Press, representatives from Christie's visited the DIA in June, a month before the city filed for bankruptcy.

Questions over the fate of the DIA began in May, when the Free Press first reported that the museum, along with the city's other assets, would face exposure to creditors.

"While there is no plan to sell any assets, it is possible that the city’s creditors could demand the city use its assets to settle its debts," Orr's spokesman said in a statement at the time.

Though run by a nonprofit authority for more than a decade, the museum is owned by the city. Museum officials have taken the line that as they hold the collection in the public trust, it cannot be sold.

"According to those standards, the City cannot sell art to generate funds for any purpose other than to enhance the collection," officials wrote in a statement. "We remain confident that the City and the emergency financial manager will continue to support the museum in its compliance with those standards, and together we will continue to preserve and protect the cultural heritage of Detroit.

Some state officials have jumped to the DIA's defense. Attorney General Bill Schuette held up the museum's argument, issuing an opinion that the collection can't be sold to satisfy Detroit's debts or obligations. State Sen. Randy Richardville (R-Monroe) introduced legislation to require the museum to "adhere to the code of ethics for museums." Though the House didn't move forward with the legislation, those ethics would prevent the museum from selling art; if it were were to lose its collection to creditors, its reputation would be compromised, making it difficult to host exhibitions, collect or fundraise.

Experts believe that Orr still has the legal authority to sell off the museum's collection, despite Schuette's opinion -- no matter how cherished an institution the Detroit Institute of Arts may be for the region as a whole.

"The citizens of this State recognize that abandoning or selling the public's artwork would damage not only the City's but the State's cultural commonwealth," wrote Schuette. "In Michigan, we not only appreciate our cultural treasures, we guard them zealously in charitable trust for all state residents, present and future.”

UPDATE: 5:00 p.m. -- The DIA released a statement Monday afternoon in response to reports that Kevyn Orr had contracted Christie's to appraise its collection:

The Detroit Institute of Arts (DIA) has learned that Christie’s, at the request of the Emergency Manager, plans to proceed with a valuation of the DIA collection, and we will be cooperating completely in that process. However, we continue to believe there is no reason to value the collection as the Attorney General has made clear that the art is held in charitable trust and cannot be sold as part of a bankruptcy proceeding. We applaud the EM's focus on rebuilding the City, but would point out that he undercuts that core goal by jeopardizing Detroit's most important cultural institution.

In addition, recent moves in Oakland and Macomb counties to invalidate the tri-county millage if art is sold virtually ensure that any forced sale of art would precipitate the rapid demise of the DIA. Removing $23 million in annual operating funds – nearly 75% of the museum’s operating budget – and violating the trust of donors and supporters would cripple the museum, putting an additional financial burden on our already struggling city. The DIA has long been doing business without City of Detroit operating support; any move that compromises its financial stability will endanger the museum and further challenge the City’s future.

Detroit Institute of Arts Collection To Be Appraised By Christie's, Auction House Hired By City Manager: Report
Detroit Could Auction Off Priceless Art 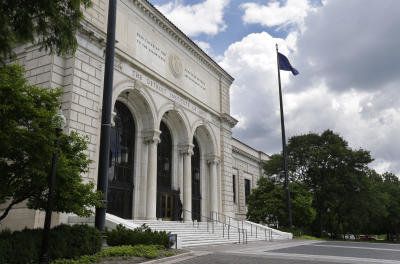