NEW YORK-- Time and time again folk rock legend Bob Dylan has blatantly borrowed for his lyrics. Christie's auction house acknowledged in 2009 that a handwritten Dylan poem that was up for sale really consisted of words from a song by country crooner Hank Snow. Director Martin Scorsese showed in his 2005 documentary, "No Direction Home," how Dylan stole the line "Go away from my window..." -- the immortal opener of his 1964 song "It Ain't Me, Babe" -- from singer John Jacob Niles. Dylan also purloined text from Japanese writer Junichi Saga's novel "Confessions of a Yakuza" for his 2001 album "Love and Theft." And that's not the only thing Dylan lifted from Asia.

For the current exhibition of Dylan's paintings, "The Asia Series," which runs from September 20 to October 22 at Gagosian's Madison Avenue gallery, the artist painted 18 images -- and some of these are copied from well-known photographs, the New York Times reports. Gagosian claims on its Web site that the show is "a visual reflection on his [Dylan's] travels in Japan, China, Vietnam, and Korea," and the "people, street scenes, architecture, and landscapes" that he encountered there. But some digging on a discussion page at the Dylan fan site Expecting Rain, which furnished the evidence that prompted the New York Times article, reveals that no less than ten pieces in "The Asia Series" may in fact be a visual reflections of Dylan's travels through online photo archives rather than of any personal journey.

As a matter of fact, no less than six photographs in the show are seemingly drawn from a single source: Flickr user Okinawa Soba's photostream. "Imagine my surprise to see at least FIVE or SIX Dylan paintings on the Gallery walls that appear to have been painted from photographs in my personal collection (the originals still in my possession), and posted by me to FLICKR," the user posted on the Expecting Rain message board. The photos include a 1900 James Ricalton photo of a Manchu bride and groom in Beijing, a 1923 photograph of a Canton canal crowded with river boats, and circa 1880 photograph of a Japanese pack horse in front of Mount Fuji. In these instances, Dylan cannot be said to have broken any laws, because the photographs fall in the realm of public domain. 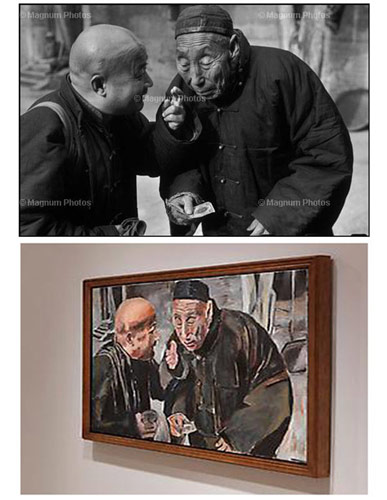 But four of the photographs replicated in Dylan's show are, in fact, copyrighted. Two that the singer copied are owned by Magnum Photos -- one is a 1998 Bruce Gilden black-and-white photo of a pair of Yakuza gangsters lighting a cigarette and another is a 1948 Henri Cartier-Bresson image of a eunuch in the Dowager Empress Tzu Hsi's court. A third, a Dmitri Kessel Life magazine picture titled "Boys Playing Board Game on Sidewalk in Front of the Trocadero Hotel" is owned by the Life Archive. A 1915 Léon Busy image of a Vietnamese woman that apparently inspired Dylan's 2010 painting "Opium" -- the work used to promote the Gagosian show -- has a 2008 copyright owned by France's Musée Albert Kahn.

When ARTINFO asked Gagosian for comment on the situation, the gallery provided the same statement it gave the New York Times: "While the composition of some of Bob Dylan's paintings are based on a variety of sources, including archival, historic images, the paintings' vibrancy and freshness come from the colors and textures found in everyday scenes he observed during his travels."

Dylan's artworks, however, are evidently close copies of the original photographs -- few, if any, artistic liberties taken can be discerned, aside from adding color to black-and-white picures. In a statement released just this Monday, Gagosian acknowledged that some of Dylan's paintings are based on archival and historic images -- but it is unclear why the gallery wasn't more careful given its recent, high-profile run-ins with copyright law.

In March of this year, French photographer Patrick Cariou won a lawsuit against Richard Prince and Gagosian Gallery (Prince is currently appealing). In the suit, Cariou accused Prince of copying 41 of his photographs of Rastas in Jamaica from his 2000 book, "Yes, Rasta," for a December 2007 Gagosian show for a series called "Canal Zone." Judge Deborah A. Batts ruled that Prince's use of the images was not "transformative" enough to be allowable under fair use.

It bears mentioning that Prince, whose "Canal Zone" artworks garnered up to $10 million apiece, and whose appropriations seemed far more "transformative" than Dylan's, wrote the text for the "The Asia Series" catalogue.

New Gucci Museum Meshes Fashion and Art in Florence, With the Help of Francois Pinault

"Not an Aesthetic, But an Attitude": Artist Deborah Brown on the Future of Bushwick's Art Scene

Get Back to Where You Once Belonged: Critics Pan Paul McCartney's Ballet Debut, "Ocean's Kingdom"