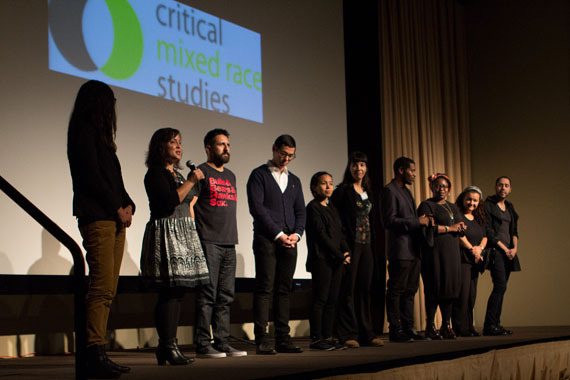 One of the main characters in the award-winning film Dear White People is a mixed "black and white" college student who works to make sense of her life and relationships. The movie addresses several thought-provoking subjects, and the storyline around this character raises the question: Should people of mixed heritage have to choose one part of their ancestry over another?

From Nov. 13 to Nov. 15, over 600 people came together at DePaul University in Chicago to explore this question and other issues surrounding ideas of race, perceptions of racial mixture, and the experiences of mixed-heritage people. The goal of the 2014 Critical Mixed Race Studies Conference, titled "Global Mixed Race," was to "bring together scholars from a variety of disciplines around the world to facilitate a conversation about the transnational, transdisciplinary, and transracial field of Critical Mixed Race Studies."

As the number of people who identify as "mixed" increases, discussions around various topics concerning people of mixed ancestry are also expanding and challenging our perceptions of race and racism. Both critical mixed-race studies and films like Dear White People accomplish the same goal of furthering conversations regarding race -- dialogues that we can engage in with friends, family, and those in our communities at large.

"Dear White People, Please Stop Touching My Hair. Do I Look Like a Petting Zoo to You?"

The film Dear White People follows several African-American characters at a fictitious elite U.S. university as they deal with "being a black face in a white space." Sam White, the character mentioned above, is a headstrong, Afrocentric young woman who leads the Black Student Union at her school and hosts a college radio program called Dear White People.

On her show, Sam blasts individual and systematic forms of racism. "The minimum requirement of black friends needed to not seem racist has just been raised to two," she quips. "Sorry, but your weed man Tyrone does not count."

During the film, we find out that -- small spoiler alert! -- Sam has a secret. While early on we see her mother is African American, it's later revealed that her father is European American. In other words, some may not believe she is as "black" as she portrays herself to be.

Sam's mixed heritage complicates the story, as does her relationship with Gabe, her undercover boyfriend/friend-with-benefits who is of the European-American persuasion. Much like Sam had done with her father, she routinely pushes Gabe away, and this emotional distance makes their romance a difficult one.

During an argument, the two have an interesting exchange in Sam's room, while a group of her friends from the Black Student Union wait outside her closed door:

Gabe: "Have to pick a side? I'm so sick of your 'tragic mulatto' bullshit."

Reggie (from outside the door): "Did somebody say 'mulatto'?"

The "tragic mulatta/o" was -- and sometimes still is -- portrayed as a character of mixed ancestry whose personal identity is unresolved because they are caught between a "white world" and a "black world," neither of which fully understands or accepts them. While Gabe was referring to this common literary trope when fighting with Sam onscreen, their fictional encounter sheds light on some of the real struggles many people of blended heritage deal with today.

Dear People, Stop Asking, "What Are You?"

Though there are certainly many critiques of Dear White People, it's clear that director-screenwriter Justin Simien has made a positive contribution with a film that has resonated with audiences not only in the U.S. but overseas. Perhaps this is because Simien intended the movie to be less about race and more about identity.

Simien says of the film, "It's about the difference between how the mass culture responds to a person because of their race and who they understand themselves to truly be."

For people of mixed descent, how others perceive them is especially key to forming personal identity. Mixed-heritage people's outward appearance does not always easily fit into a single preconceived racial category, which is why they are routinely bothered with the question "What are you?"

Most often, those who pose this question are looking for a way to resolve their own anxiety when a mixed-race face does not compute with their ideas concerning monoracial groups. Those who ask "What are you?" rarely take into account how the personal inquiry may make those of mixed heritage feel like they don't belong.

CMRS Asks: Is There a "Global Mixed Race"?

Activists, artists, and scholars who compose critical mixed-race studies (CMRS) are complicating questions beyond "What are you?" and combating the myth of the "tragic mulatta/o." In past decades, CMRS has expanded over a number of academic fields spanning several disciplines.

While CMRS has fought over the years to gain legitimacy within scholarly circles, one of its greatest attributes is that the coalition is not made up of solely academics but includes community activists, students, educators, families, visual artists, independent filmmakers, and others interested in the varied experiences of mixed-heritage peoples. Of course, not all these categories are mutually exclusive, as many of the activists, artists, etc., are also scholars.

Laura Kina and Camilla Fojas of DuPaul University organized the third CMRS conference, "Global Mixed Race," which featured a variety of people telling their own stories, sharing the stories of others, and dissecting theories that surround notions of ethnoracial mixture.* In the opening keynote address, sociologist Rebecca Chiyoko King-O'Riain, co-editor of the book Global Mixed Race, explored the idea of a "mixed experience," where she discussed the commonalities that people of mixed descent share widely across the globe.

King-O'Riain noted that people of mixed heritage have had to learn how to live and operate within their respective societies, often finding themselves ostracized by individuals within their local communities and battling exclusive national definitions of citizenship. King-O'Riain explained that people of mixed ancestry therefore have often had to skillfully create a flexible hybrid identity, one where they develop a keen ability to operate among several groups.

She wasn't merely bringing back the "tragic mulatta/o" but remixed the notion within a 21st-century context. In a global climate, mixed-heritage peoples have had to navigate the opposing categories of being both colonizer and colonized, oppressor and oppressed, citizen and foreigner.

Many of those who reside within the geographical boundaries of a country may still be outcast when others decide who does and who does not belong according to one's ethnoracial background. King-O'Riain encouraged the "need to open up dialogue" for further "constructive debate" around these issues.

Borrowing from other scholars, King-O'Riain challenged the audience to think about not only the question "What are you?" but the question "Where are you from?" and why that matters. Later, historian Daniel McNeil pushed listeners to consider the question "When are you?" These inquiries present us with new entry points into thinking about how identities shift depending on space, place, and time period.

Historically, some nations have rejected people of blended ancestry (the U.S. and several countries in East Asia), while others have upheld mixture in attempts to present an image of equality within their society (Brazil, Mexico, and other Latin America countries). But pointing to these Latin American examples, it's clear that widespread ethnoracial mixture will not automatically solve the problems of color hierarchies created by race and racism.

In a conference panel on the future direction of CMRS, Eric Hamako noted that the racial future is not as progressive as many would like to think. Hamako and McNeil then discussed how mixed peoples have become en vogue. In many ways, the mixed body has gained popularity worldwide as an exotic, visual curiosity used in marketing and pop culture.

In the past, the "mulatta/o," "mestiza/o," or "half-caste" was sometimes viewed as the bridge over which darker-skinned peoples could cross into whiteness after further intermixture with those of European descent. We sometimes unknowingly reinforce this misguided belief when complementing how beautiful mixed people are.

Co-panelist Nitasha Tamar Sharma directly raised one of the popular critiques of CMRS: "Is mixed-race studies anti-black?" While the overwhelming response is that it is not, those who tout a mixed identity and study people of blended ancestry need to be aware that ideas regarding mixture have historically been used to uphold racism.

Central to the future of CMRS, Minelle Mahtani challenged conference participants to imagine what an anti-colonial approach to multiraciality would look like. Her recent book, Mixed Race Amnesia: Resisting the Romanticization of Multiraciality, also raises this and other extremely important questions.

Certainly, there are many approaches to thinking about how ideas surrounding ethnoracial mixture can be utilized as a way to combat modern-day forms of colonization and cultural assimilation.

CMRS has certainly moved beyond simply responding to the question "What are you?" in order to ask, "Where are you going?" Today, CMRS scholars are also posing new questions that investigate how mixture relates to disability, indigeneity, queer theory, and a variety of other topics.

Clearly, those devoted to CMRS are taking on work that needs to be done in order to effectively address new questions around ideas of race. Still, it remains important to continue these types of conversations on a wider scale in our own communities.

Academics do not have all the answers, and movies have a limited reach, but everyday people have the greatest ability to undo negative stereotypes that influence racial thinking.

*NOTE: This blog post admittedly lacks a thorough exploration of the many films, performances, and other presentations at the 2014 CMRS Conference. Please click on the title for more information.