I teach a university course called "Redefining Nutrition," which allows students to explore their personal dietary biases before becoming fully-fledged nutritionists. In the first part of the class, I ask the students to introduce and identify themselves as an "eating type," after which they are given the space to preach and persuade their fellow classmates to eat like they do. Once they have classified themselves as a vegan, vegetarian, or omnivore and established their position, I surprise them with the classroom-based activity of defending the contrarian view of their own eating style: the vegans have to defend eating meat and the meat eaters have to explain the benefits of going vegan. The students that claim to "eat anything" now have to support the cause for a restricted way of eating, like the "elimination diet."

It's not easy to do.

The moment I announce the activity, the classroom becomes still and facial expression changes with smiles turning to quizzical looks and confusion. As a result of having to temporarily let go of their eating identity to embrace a more flexible way of dealing with differing diets, the students gradually become more respectful of other eating styles. In the end, it is the hope that they will emerge as well-rounded, better-informed nutrition experts.

In the past year of teaching and having the class go through this exercise, a majority of students were calling themselves "Paleo." While they uniformly used this terminology, each person in the group had a slightly different variation on the theme. On the whole, the focus of their eating was a high protein, high plant in nature, devoid of grains, dairy and refined foods. As part of the process, I had the opportunity to see how the students defended their Paleo eating and to hear the contrarian retorts from others in the class on this diet.

Where did all this talk about the Paleo diet originate from? Some of the earliest publications on Paleolithic nutrition were from anthropologists Eaton and Konner in 1985 (1). Eaton specifically defined the ancestral human diet to contribute roughly equal amounts of calories from all the macronutrients (fats: 35 percent; carbohydrates: 35 percent; protein: 30 percent), which is quite different than our modernized Western diet of primarily refined carbohydrate (2). Of the fat category, unsaturated fats were predominantly eaten over saturated fat, and dietary cholesterol consumption was estimated at 480 milligrams daily (higher than the 300 milligram threshold in today's dietary recommendations) (2). The foods thought to be eaten as part of the ancestral diet include uncultivated fruits and vegetables, honey, fresh meats, fish and seafood, seeds, nuts and oils. Omitted from this list are dairy products, cereal grains, legumes, refined sugars and processed foods (3).

Although I am not an advocate of any "diet" in general, I can appreciate the Paleo diet working well for many people due to the reduction of ubiquitous, modern-day starchy carbohydrates and nutrient-poor processed foods, which can cause blood sugar increases and inflammation. One of the points brought up in the class discussion was -- is it true that prehistoric people refrained from eating any starchy carbohydrates? What about all the positive studies and proclaimed benefits of a vegetarian diet, which includes complex carbohydrates from grains? What about the Blue Zones work from Dan Buettner who showed that centenarians live in parts of the world where dietary carbohydrates predominate, like brown rice in Okinawa and grainy breads and pasta in Sardinia, Italy? After all, there are numerous studies to support dietary fiber intake for promoting health benefits for the cardiovascular system, gut and metabolism.

The other issue brought up in the class was discussion about whether the Paleolithic people were truly immune to chronic disease crises such as obesity and heart disease. According to a recent review by Rigby, obesity may not be a "new phenomenon" -- we are just seeing more of it (4). In fact, you may recall seeing Paleolithic artefacts dating over 30,000 years depicting a more gynoid, or pear-shaped, body image for females. Another article released in 2013 in The Lancet described the presence of atherosclerosis in mummies from four different geographical regions including the preagricultural hunter-gatherers (5). 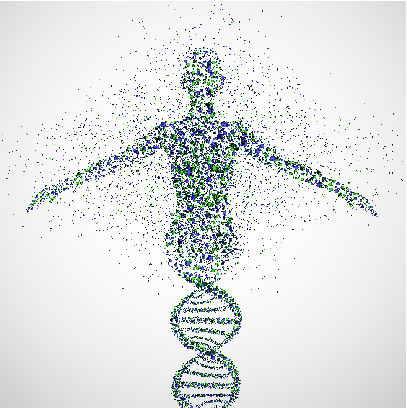 Perhaps one of the most controversial overarching points brought up in class opposing Paleo eating was: Are we really that closely related to our Paleolithic ancestors? Hasn't there been much change on the planet and within human physiology? What about the modifications that have been made to our gene expression based on environmental factors? For example, the activity of certain enzymes in the body is known to adjust depending on the availability of a substrate (6). Interestingly, there has been an increase in the genetic expression of amylase enzymes in humans since the introduction of grains that allows for better utilization of long-chain carbohydrates as an effective energy source (7). This modification indicates that genetic adaptation (i.e., epigenetics) of humans today represents a different template from that of our Paleolithic ancestors. In fact, a journal article published in BMC Medicine highlights emerging research showing that "microevolution" can take place from generation to generation, demonstrated by shifts in anatomy and physiology such as lactose tolerance, changes in alcohol metabolism and even reductions in teeth size and number (8).

Instead of focusing our attention exclusively to the past, we may need to reconcile what we have in the present day and what awaits us in the future. I believe that one of the trajectories nutrition will travel is that of personalization. As part of this incoming wave, I recently had my genetics assessed by 23andMe, whose analysis examines not just your health risks and drug metabolism, but also one's ancestry. They also provide the percentage of "Neanderthal" present in a person from which roughly 2.5 percent of our ancestral DNA is derived. However, the other 97.5 percent is full of diversity from an array of ethnic backgrounds. And if it weren't enough that we are a medley of genes from all over the world, we also live in a particular area of the world where our genes may or may not have originated from. While we retain some trace Neanderthal DNA, we are learning of the complexity of the genome -- of microRNAs, epigenetic influences and single nucleotide polymorphisms.

Is there really one "right way" to eat for all people with diverse ethnic heritages and modified DNA? Are we making foods culprits rather than examining what the environment has done to the food? Of course, our lifestyle in the 21st century has very different challenges compared with Paleolithic times: more pollution, contamination of food and water, homes filled with chemicals, mold and other toxins. It has been estimated that the average adult carries within about 700 different contaminants (9). Additionally, agricultural progress has resulted in significant alterations to food through feeding practices, selection, and genetic modification, making vegetables starchier, meat fattier and processed food tastier with sugar and salt. According to anthropologist, Christina Warinner, who discusses the misconceptions of the Paleo diet in her 2012 TED talk, many fruits, vegetables and animals have been drastically changed since our caveman days (10).

Because eating is tribal and connects us to our humanness, we are always seeking our tribe. Which one do we belong to? Which one is best for us? We may have traversed several "eating tribes" over our lifetime. But one thing remains -- you are unique with your multi-faceted DNA and its potential for expression. It's difficult to put a label on you and assign you to a way of eating your whole life.

Maybe the "sweet spot" of nutrition is to make eating personalized, taking into account the foundation of the past as well as the dynamic fluidity of the present and future, by considering the DNA of one's lineage, one's current environment, time of the year, location on the planet, stress level, and toxicity status. I think we have to start with our ancestral DNA and then think broader beyond the trace of our ancient DNA to look at what is being presented to us in the future. We may ultimately find that eating is a moment-to-moment combined activity of assessing our genes, environment, age and gender rather than something statically Stone Age.

The Paleo approach sets forth an effective precedent for eating: removing the products of the modern agricultural era. However, as the students uncovered in the "Redefining Nutrition" class, no diet is absolutely perfect as each contains inherent advantages and disadvantages. For the future of nutrition, I see us evolving beyond diets and into personalized eating for our genes as well as the epigenetic dynamics that our genes experience through their interaction with the environment. We may not be there just yet, but we are seeing the path unfold. The Paleo way of eating provides a good framework, and as we uncover more ways to tailor our eating with innovative, personalized methods, I would hope we evolve with the times rather than stay wedded to the past.