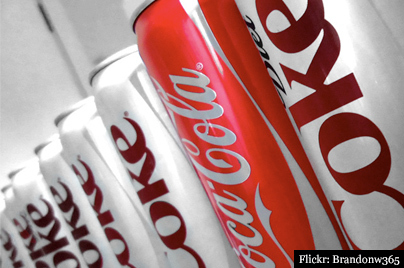 Diet soda has gotten a lot of press over the past several years, most of it not so great. It has been associated with weight gain and other negative health parameters. But does diet soda deserve this bad rap?

In this article, I examine diet sodas (specifically studies on the artificial sweeteners used in them) and their impact on weight and health.

What Exactly Is Diet Soda?
Put simply, it is a calorie-free version of regular soda, which we will define as carbonated water, flavoring, and sweetener. While regular soda (Coke, Pepsi, Mountain Dew, etc.) is usually sweetened with corn syrup or sugar, diet sodas use a variety of artificial sweeteners, such as aspartame, sucralose and stevia.

Does Diet Soda Cause Weight Gain?
The answer here is... a very clear maybe. First, though, let's look at the obvious. Water is the best choice for a beverage, hands down. In an ideal world, nobody would drink soda, either regular or diet. In fact, no one would ever eat anything processed. However, most of us do not live in an ideal world, we live in the real one, so the question is, if you're going to drink soda, is drinking diet soda or regular soda actually better for you?

Data reveals that on any given day, 20 percent (close to 62 million people) of the U.S. population consumes at least one diet drink. So, how does diet soda affect this huge group of consumers? At first, there appears to be a correlation between drinking diet soda and being overweight.

Data gathered from San Antonio Longitudinal Study of Aging revealed that diet soda drinkers are more likely to be obese than non-drinkers. Another analysis found that soda drinkers (both regular and diet) are at increased risk for metabolic syndrome. However, this does not mean that drinking diet soda causes weight gain. The "Big Mac and Diet Coke" phenomenon, where people use consumption of diet sodas as cart blanche to eat whatever they want, is a possible explanation. Additionally, starting to drink diet soda is a common behavior for those who have begun gaining weight as a way to counteract it, but if the lifestyle that caused the gain in the first place is not addressed, the diet soda will be of little help.

Proponents of the "diet soda causes weight gain" hypothesis cite research that consuming artificial sweeteners disrupts the body's ability to regulate food intake, which leads to overeating. Rodent research supports this idea, though I could not find any human data implying causation. Still, consumption of artificial sweeteners can potentially lead to sugar-seeking behavior, which then offsets any calories saved by the no-calorie sweetener.

As far as health issues aside from weight gain, there is some (animal) data that artificial sweeteners can predispose people to cancer, but most camps believe it is negligible. Many humans also experience poor reactions to certain artificial sweeteners, such as headaches from aspartame. The "artificial sweeteners are safe" camp argues that if they did pose a true health threat, given the millions of people who regularly consume them, it would have become clear by now. It seems like a reasonable argument, though certainly there are real potential risks associated with their consumption.

As with most things, it comes down to risk versus benefit. Being obese is a clear ticket to an early death and I recommend doing what needs to be done (in a healthy way) to maintain a low body fat percentage. For a man with a predisposition to obesity and diabetes, for example, who finds a diet soda calms the sweet tooth, diminishes cravings for Skittles, and allows him to maintain a healthy body weight, the benefits probably outweigh the risks. However, if diet soda leads to overeating, then the risks surely outweigh the benefits and you should find a way to cut diet soda out of your diet.

How Do I Stop Drinking Diet Soda?
If diet soda causes you to overeat and eat sweets, or if you feel like you react poorly to them, then removing them from your diet is a reasonable thing to do. Substituting club soda with lime or lemon works for many people.

For others, a more gradual phasing out of diet soda is a better idea. Cold turkey is another approach, though many people are unable to make it through the first several weeks as they retrain their brains.

As with most aspects of nutrition and exercise, it is up to you to find out what works best for you. But keep in mind, if diet soda (in moderation) allows you to happily maintain a healthy body weight and you live a healthy lifestyle with good nutrition and effective exercise, it may not be a horrible thing -- especially if the alternative to no diet soda is weight gain or obesity.

What's your opinion of diet soda?

More From BuiltLean:
1 Can of Coke a Day = 30lb of Sugar a Year
Benefits of Juicing: Is Juicing Good For You?
How to Lose Man Boobs: Definitive Guide