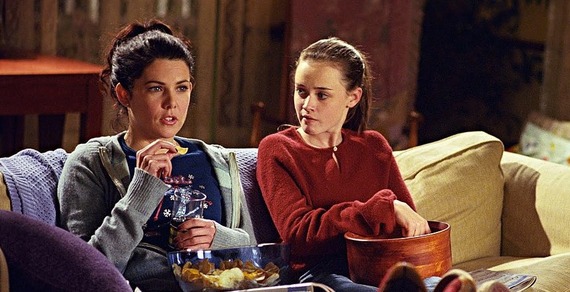 I have a problem. Admitting it is the first step, right? I mean, isn't that what they say? When you admit you have a problem, you can finally work on fixing it--I think it goes something like that. But this problem, which we'll get to in a brief moment, is one I kind of enjoy having, really enjoy having actually, like a little too much--and that's why I know it must be a problem.

Okay, so before I get into what the issue is, let me just start by saying that it isn't drugs or sex. (Yes, apparently it is possible to have troubles unrelated to those, who knew?) So if you're closely related to me, and the fact that you're reading this basically implies so, you may read on without clenching your entire body out of fear that I may acknowledge the existence of the vagina-- don't worry, I won't, I never do (that's another problem).

For many years now, I've had a soft spot, a slight addiction to the TV. When this started I was twelve, in school, and dreading every painstaking moment--but when I realized that the television was waiting for me upon my arrival home from school, I could almost make it through the day. I'd sit in class, thinking about my fictional friends from shows that had already ended, and a hopeful feeling would waft over me like some sort of safety net. It was love; pure, one sided, delusional, love.

Over the years, shows have come and gone on my rotation of obsessive re-watching: Freaks and Geeks, The Office, Seinfeld--but one continues to pull me in year after year, day after day, and that is Gilmore Girls. With the revival around the corner, I've been thinking about it more lately, trying to analyze what it is about this show in particular that has me completely enthralled several years later.

I probably watch Gilmore Girls everyday or almost everyday-- I honestly cannot even believe I'm admitting to this, because though I do enjoy it that much, I'm also completely mortified by my knowledge and analysis of Rory and Lorelai's relationship. There's something about this show, it's completely unique to itself, so unique that it almost feels like the actors are trapped in Gilmore world, and if they were to go home after work, they'd have no choice but to talk twice as fast and unknowingly reference Ben-Hur, Valerie Cherish, and Umpa Lumpas in casual conversation.

Somehow, the show is wildly entertaining and dearly emotional, but if you look closely you'll find that it does not resemble real life on any level. They gorge themselves without gaining weight, they reference every movie, book, and TV show but you rarely see them consume anything, and Rory has a boyfriend so obsessive he basically stalks her but he never even tries to get in her pants.

I think Gilmore Girls' lack of ties to reality is the reason I can't seem to look away. For an hour I have permission to transport myself to a place so obscure, so intimate, so fast paced, so dramatic in one sense but completely vapid in another. It's an hour-long drama, but the drama they acknowledge is drama they create, and the real concerns like "my Mom is four years old and I was abandoned by my father" or "my Mom is definitely a high class racist and if this is her reaction to a white straight male that owns a diner, can you even imagine if he was..." There are plenty of real issues there, but they all seem to be disregarded and replaced with ones more manageable for the general public like, "Oh no, we are out of coffee."

The underlying drama that we process subconsciously is what keeps us glued to the screen. On the surface, many of us watch because we would love a world with a picture perfect mother-daughter relationship and that is not something many of us have. So we keep coming back, living vicariously through these two people who seemingly have a dream relationship.

"Seemingly," that's the key word here. See, if you pull back the layers you'll find that the only thing that makes this show relatable on any level is that Rory and Lorelai's relationship is just as awkward as the one you have with your Mother. Yes, they are best friends but right out of the gate, that's a red flag! Mothers and daughters aren't supposed to be best friends first, they are supposed to be best friends last, maybe never quite honestly. If your parent treats you as a friend you lose boundaries and develop a sense of angst that your whole existence is teetering on a cliff with absolutely no stability. Quite honestly, between Rory's mother wanting to be her best friend and her father being absentee, if we put two and two together she should definitely have OCD, anxiety, or some kind of substance problem. But instead, she is perfect-- so perfect that whenever she does even the tiniest thing wrong you feel uneasy, almost like you caught Kate Moss breaking wind in public; you cringe.

That's the genius behind the phenomenon that is Gilmore Girls, it's a completely imaginative universe that nobody you know could ever possibly exist in, and yet somehow, it still manages to play out the issues you have with your parent without you even realizing it. Plus, Lauren Graham and Alexis Bledel are SO pretty, I mean WOW. So anything and everything they do, we allow, because if Lauren Graham wants to be your best friend, it doesn't matter who she is--you do it! Lorelai Gilmore is the ultimate feminist who doesn't let herself be dragged down by any particular mold. This is a renaissance woman, and we can never grow tired of watching her be groundbreaking. And maybe that's the only real reason we all can't seem to look away, because so rarely has a woman that beautiful ever been given permission to be that cool, witty, or opinionated on TV and that means a lot.