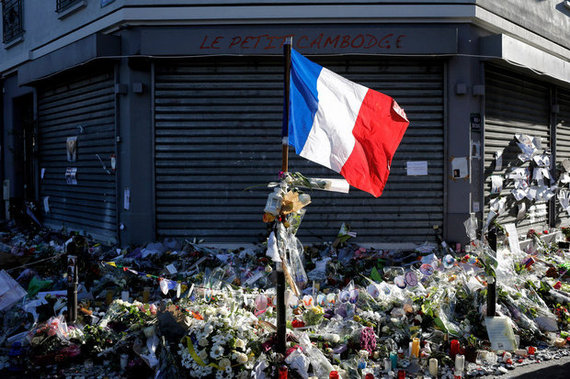 A French flag placed in front of flowers outside 'The Petit Cambodge' in Paris Sunday, Nov. 22, more than a week after the Paris terrorist attacks. French President Francois Hollande will preside over a national ceremony on Nov. 27 honoring the victims of the deadliest attacks on France in decades. (Laurent Cipriani, Associated Press)

After the horrible terrorist attacks on Paris, France's President Francois Hollande swore revenge against ISIS, saying we "will be merciless toward the barbarians of Islamic State group." Republican presidential candidates called for a highly aggressive military response from the United States. For example, Ted Cruz called for the US to abandon its commitment to strive for "zero tolerance for civilian casualties" when facing terrorists who "have such utter disregard for innocent life." Jeb Bush called these attacks a sign of "an organized effort to destroy Western civilization." Marco Rubio called for a "substantially increased commitment" of US ground troops in the war against ISIS.

This is exactly what ISIS wants! This terroristic state wants to be the targets of "merciless" revenge by French and other Western forces. ISIS leaders would love to see the United States publicly abandoning its commitment to trying to avoid civilian deaths in our airstrikes. US ground troops actively fighting ISIS, instead of the current situation of US Special Forces training and advising local Kurdish fighters, would be a generous gift to ISIS.

Why? Because any of these changes in government policy would radicalize other Muslims. So does rhetoric from Western political figures pitting a "Western civilization" against Islam, or promising "merciless" revenge.

What is the problem with radicalizing Muslims? Causing Muslims to grow more radical results in them contributing resources to anti-Western causes, including ISIS. There is a spectrum of radicalization, and aggressive actions we take results in some Muslims moving further along the spectrum.

Let's apply probabilistic thinking. For instance, consider what happens when there is a report in Muslim media of an air strike by Western forces killing civilians. At any point, there are a myriad of Muslim youths who are angry at the Western intervention into Syria. For a number of them - say a hundred - the report will be the thing that tips them over from anger to outrage, and they will decide to join ISIS.

Let's say five percent get trained in ISIS training camps as suicide bombers. That means five new suicide bombers per report of an air strike killing civilians, ready to wreak havoc on the United States and other Western countries. This same report will radicalize Muslims living in the West, making them willing to hide and otherwise support suicide bombers. It will also cause Muslims to contribute money to ISIS to fund its activities, including terrorism. This is the mix of ingredients required for the kind of mass-scale, coordinated terrorist attack that struck Paris.

By responding aggressively with airstrikes and angry rhetoric, we let the terrorists win! Even worse, by getting our ground troops directly involved in fighting ISIS, we would be taking the path to another Iraq.

So what should we do? We should not act immediately! We need to go against our intuitive emotional self's desire for revenge. Instead, we need to step back and assess the situation intentionally.

Recent research shows that after any emotionally powerful event, in politics or private life, our brains tend to assign too much weight to that event compared to what is really important to us, a thinking error called attentional bias. To fight this thinking error, we should consider what are our actual long-term goals and how to get to them in the best possible manner.

Our actual goals are to decrease the likelihood of future terrorist attacks, not increase their likelihood through an aggressive response. To achieve our goals, a good question to ask here is "what would ISIS not want us to do?"

Let us set aside our emotional desire for revenge, however difficult, and take the hard road that will achieve our long-term goals. Otherwise, we let the terrorists win!

Bio: Dr. Gleb Tsipursky leads a nonprofit organization that helps peple reach their goals using science, Intentional Insights, authored Find Your Purpose Using Science, and is a tenure-track professor at Ohio State. Subscribe to his newsletter, support his writing on his Patreon page, and get in touch with him at gleb@intentionalinsights.org.