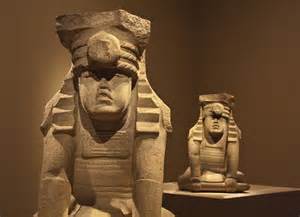 A few years ago I saw an exhibit at the San Francisco art museum featuring sculptures of two ancient Olmec princes who were twin brothers.

Looking at one of the giant stone heads, my companion said, "Doesn't he kind of look like Donald Trump?"

I looked at him again. Indeed there was the same Trump pout on his face. We both laughed at the thought.

But we're not laughing now. Could Donald Trump indeed be emperor material?

An ancient book of wisdom from around 1,000 BC in China titled the I Ching belongs to a genre that medieval Europeans called a "mirror". The mirror was a book intended to educate princes on how to become the leader of a nation.

The I Ching too was created for that reason. It showed the Duke of Chou how to gain and rule an empire. Chou's empire governed China in relative peace for over a thousand years.

Nowhere in the I Ching does it suggest a prince pander to the desires of his followers. But this is exactly what Donald Trump does. He castigates groups of people one moment and then curries favor with them the next.

For example, shortly after all his opponents dropped out of the race for US President in early May, Trump said he would fire Janet Yellen even though he thought she was a competent head of the US Federal Reserve.

According to a Financial Times article Donald's positive view of Janet came from her decision early this year not to raise the interest rate that the Fed charges big banks for overnight borrowing.

Reading the article, I found myself in shock, agreeing for the first time ever with Trump.

Trump tells us he favors the Fed keeping the US dollar "weak," I.e, inexpensive relative to other currencies, because a strong US dollar is loved by China. A strong US dollar means China can outcompete the US in the world export market.

Trump also asserts that a higher-priced dollar would make it harder for the US government to pay interest on US debt.

These things are true--as far as they go. However, the foreign exchange price of the US dollar versus other currencies doesn't just depend on the Fed - it depends on growth rates in the global economy too, and in some key places that isn't happening.

This is why the dollar is already strong relative to other currencies, making prices of US exports higher abroad and global business deals more difficult. Along with that has come a slump in oil industry prices. Oil prices have hit companies hard that relied on the oil futures derivatives market.

Also, after Yellen's threats in 2015 to raise the Fed's borrowing cost of the US dollar, the stock market plunged. This year the stock market has continued to lose billions of dollars in value.

So, all Trump is really saying is that Yellen's non-action this year kept things from getting even worse than they already were, and it probably will help improve our future.

So why isn't this good enough for Mr. Trump to keep such a capable person in office after her term expires in February 2018?

Why decide now to fire such a capable person? Says Trump, it's because Janet Yellen is "not a Republican". He would replace her because he thinks "it would be appropriate".

The reality is that Trump was simply pandering to Republican Party leaders who do not want him to be the candidate of their party in the 2016 US presidential election.

About the same time Trump tried to convince party officials of his Republican loyalty by his intention to fire Janet Yellen, Trump appeared at the California State GOP convention in Burlingame, California.

Nick Miller, in a local newspaper, The East Bay Express, reported that Trump said, "Folks, I'm a conservative--but at this point who cares?"

Miller adds, "This came after ridiculing the GOP establishment as 'disgusting' and 'losers'".

Trump not only panders to whatever audience he's talking to each time, but he flip-flops on nearly every thing he says he believes in.

If the Olmec statue of the prince was anything like Donald Trump, I suspect he was no more than a blip. The ancient Olmec culture in Mexico lasted for 800 years. This great civilization influenced the Maya, Aztecs, and much of the rest of Central America.

And they didn't do that by building a giant wall around themselves.