Photos of oil-soaked suffocating pelicans drifting in pools of oil from the British Petroleum oil disaster have become a heartbreaking symbol of the environmental catastrophe that is assaulting the Gulf of Mexico and coastal communities. The last thing on this writer's mind was photographing more of the same. The focus of this latest trip to a beloved Louisiana Coast was going to be the region's people and a threatened, unique society. Then a call came in from Grand Isle, Louisiana, on Monday night. Fishermen were concerned, and the charter captain said there was "something you should see," on Queen Bess (Bird) Island. The 7.5 acre island lays NNE of Grand Isle in Barataria Bay.

An important rookery is situated there-- a nesting ground that reestablished the brown pelican in the Pelican State. So, the writer set the alarm for 4 AM. After all, this was the people's story and whatever it was, it needed to be heard. Ben met me with his boss's boat at 7 AM at Bridge Side Marina in Grand Isle, epicenter of the latest oil assault from the doomed Deepwater Horizon rig.

Dawn offered a grand sunrise, and as our skiff skimmed over relatively flat seas, the endless sky was a counterpoint to the sickening sheen on the water's surface, blobs of red-orange light crude, and worse yet, bubbles of foam and oil that indicated controversial dispersants had done their job, suspending oil in the water column, making the water opaque and denying sunlight to the organisms below. It wasn't long before the boat's hull was fouled with the deadly stuff. Oil was to be expected. What we saw at Queen Bess should not be happening, especially given the public relations campaign British Petroleum has in place about laying boom material around nesting areas. It was not a pretty picture.

Twenty minutes out, Ben signaled that Queen Bess lay just ahead. Along the way we passed Louisiana National Guard and local shrimpers using huge loops of boom to corral some of the oil. Spotter planes overhead were providing direction for the skimming operation. It was a vast seascape, and the boats looked small on the watery, oiled canvas.

There were rings of deflective and absorbent boom surrounding Queen Bess and neighboring Grand Terre Island, but something was very wrong. The boom was a neglected window dressing--broken, saturated, and coiled in some places like gigantic, filthy, bloated snakes. 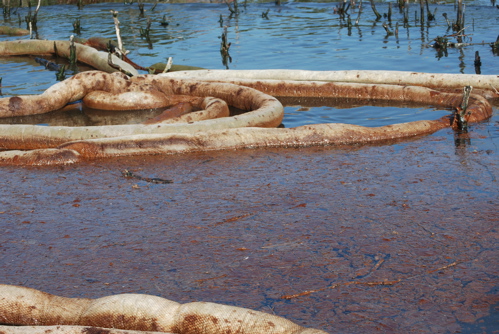 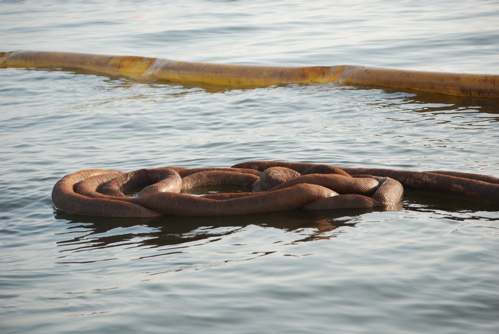 You understand, boom must be managed; it must be changed and maintained on a regular basis. You don't diaper a baby and not change the fouled diaper. BP has polluted critical nesting grounds and abandoned the responsibility for care and maintenance. 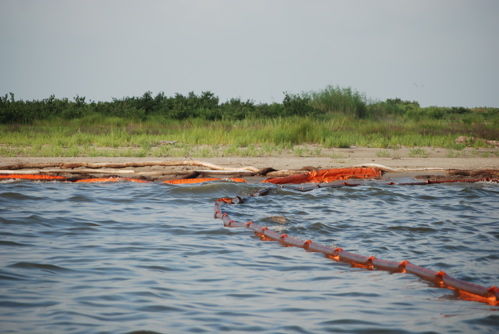 Oil had crept over, under and around the abandoned boom that formed a moat around Queen Bess's castle. Pelicans on the shore that were not oiled were wading through puddles of gloppy red goo, literally trying to shake the stuff off their feet. We observed a pair of birds, which were obviously bonded, and watched helplessly as the non-oiled one of the pair started to fly away while it's mate or companion flopped helplessly in the grass. 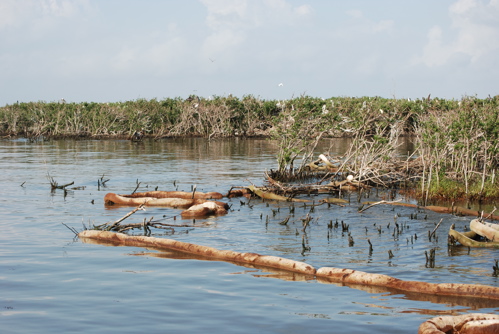 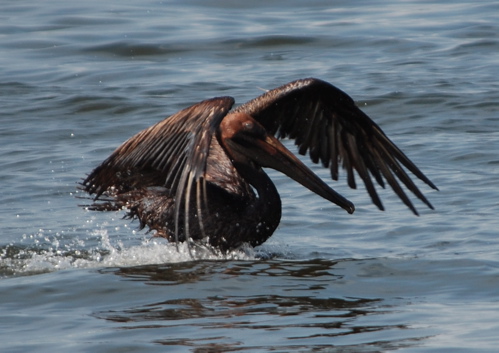 Four unfortunate, completely oiled birds, bobbed in the sheen and dispersant-filled "moat" with no hope of flight or food. Uncounted oiled birds wobbled through the grasses or spread their wings in a kind of gruesome crucifixion tableau on the rocky shore. The writer hesitates to use the word "crucifixion." But that is what it looked like, and words and photos are all we have now. 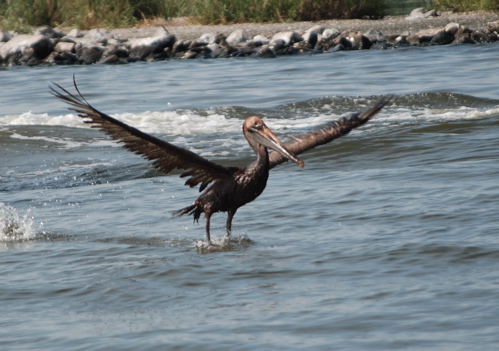 There wasn't anything we could do except witness an unfolding tragedy, and Ben was frustrated that it seemed that the State Department of Fisheries and Wildlife was not being pro-active with pelican rescues after the dramatic footage of boxes of oiled birds taken near Grand Terre dominated news coverage the previous week. Much of the media had left since Obama's visit to Grand Isle's temporarily sanitized beach and was now following the river of oil to the pristine beaches of Florida. The natural cycle of these remaining pelicans was not being addressed, and the river of oil continues to follow the winds and currents from the South East. It was not as if the oil had moved on--it was moving everywhere.

"I wish BP would hire me to help fix this," Ben said. "My fishing grounds are closed and I want to help safe my life and work here."

This rocky island of low mangroves and trees is still a breeding ground. There are chicks and fledglings in the nests that need food and need parents to provide food that is not oiled. Nests are found on the ground or in low trees. Pelicans lay an average of three eggs, and statistics say that survival in good times is limited to one egg. The hatchling is blind and completely dependent on its parents, who share nesting duties, shield them from the sun, and feed them regurgitated food from their leathery pouches. They don't develop downy feathers until two weeks after hatching and feeding continues for about nine weeks. Each chick will devour about 150 pounds of fish, and fish are accumulators of toxic chemicals. It was accumulations of DDT that almost eradicated the brown pelican from Louisiana waters. Now the fish are oil-soaked, and if and only if the parent is able to reach the chicks, dinner consists of toxic regurgitations. In a worse case- scenario, oil soaked parents cannot reach the nests, let alone feed themselves. 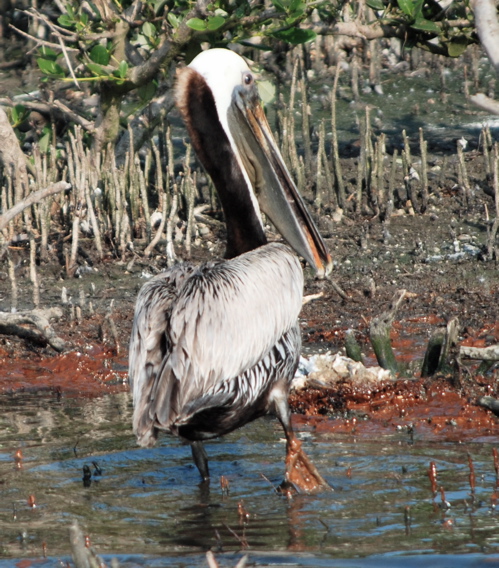 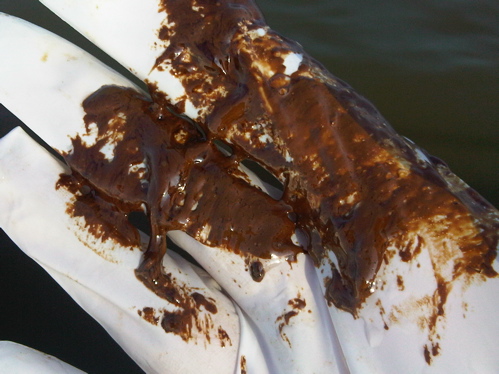 What is fouling feathers

But federal and state management procedures say the rookery must not be disturbed no matter how many birds are unable to assist their young. At least that is what we were told in a serendipitous encounter with wildlife management. Knowing that a pelican may wait up to five years to find a mate and make a nest, it seems unreasonable to sacrifice adults in the hopes that the fledgling trapped by a moat of oil will somehow miraculously survive. Generations of pelicans are at risk, victims of policy. Someone needs to think outside of the box of regulations and procedures that were not designed to address the greatest environmental catastrophe of our lifetime.

Our encounter with wildlife officials happened after we sadly left Queen Bess, feeling helpless and resigned. Since we were out in open waters we took a look at a small island inundated with oil and in the process of sinking because the grasses had died. We gathered some of the worst goo for Ben's friend who wanted to test a detergent on it. These men need to have a good method for unfouling their boats. 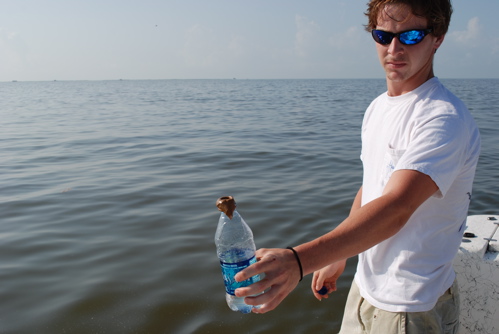 On the return trip, we encountered a wildlife boat and witnessed a pelican rescue. Three pelicans were dramatically and successfully netted from one of the "moats," and placed in carriers for transport to a rehabilitation facility. This looked like good news, and we motored over to the lead boat to congratulate the official who shouted, "This was only a test. This is a failure!" He saw the camera and obviously was unhappy that we witnessed a very successful capture. How could the writer know this was a successful capture? Ten years as a wild bird rehabilitator offered perspective. 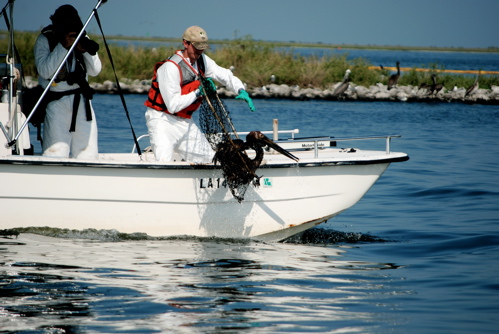 Ben and the writer looked at each other. "Did you hear that?"

"Did he really say this was a failure?"

We were treated to a lecture that this was "only a test" and that laws and procedures forbade "disturbing a rookery." The obvious question is that since the entire ecosystem has been destroyed, don't drastic times call for drastic measures? No one seemed to be thinking out of the box. BP was not maintaining the boom, oil was everywhere, the parent pelicans were in great danger, and this official was saying the nests must be undisturbed. It was obvious that the entire rookery was under siege.

A wildlife veterinarian told us it was her opinion that the chicks should be removed from the nests, hand fed, which is relatively easy to do, and transported far away from the oil for eventual release. To not intervene is folly and a death sentence. But rules are rules.

So, we contacted a very helpful wildlife official in Baton Rouge. Robert Love works for the Louisiana Department of Wildlife and Fisheries and has been a biologist for nearly thirty years. Love is responsible for coastal marshes on six refuges, eight Wildlife Management Areas, and the management and supervision of fur, alligator, rare, threatened and endangered species, and reptile and amphibian resources within the state.

Love began our phone conversation sounding a bit resentful that writers would question policy, but then said that he realized "journalists have a job to do."

Love replied that his first responsibility was "to do no harm," but he realized that the lack of boom maintenance was making the situation worse. He has been inundated with advice from federal and state agencies and also must follow a chain of command and a set of rules that calls for minimal intervention. His responses were thoughtful, cautious, and respectful of wildlife--a biologist caught in a dicey situation.

Love said his department has a 70 percent capture rate (the average is 30 percent) and is "proud of his employees." Love was perplexed regarding our encounter with the "failed test" and could not offer a response.

Was there room to think outside the box?

Love offered a qualified "maybe," but said it was "difficult for us to obtain complete command" with the layer upon layer of agencies and lack of a unified command structure.

We asked who was in charge of boom maintenance.

Was BP's lack of attention to boom maintenance a problem?

So here is the catch-22. Damned if you intervene and buck the system, and the birds are certainly damned if we don't get BP to maintain the boom. To leave it as is traps the unfortunate pelicans in a toxic environment and the chicks that survive will leave the nests and enter the brew.

Having recently returned from Haiti, I am reminded of conversations I had with Haitian doctors who were forced to do surgery and amputate limbs without benefit of sterile conditions or anesthesia in the aftermath of the January 12 earthquake that claimed 300,000 lives. The earthquake was a natural disaster and men and women in the health care field had to abandon accepted standards of care in order to save lives.

BP's man-made catastrophe requires that reason be applied in an unprecedented ecological disaster. It is time to throw out the rulebooks and do what common sense and compassion dictates.

####
Note: Please feel free to use any of these images and share them frequently and often. I am removing my copyright on them.