Case in point: An outing by Daily Show scribe Rachel Axler in yesterday's NYT styles section where she details her strike diary (for money, she makes clear — although she can't help joining fellow TDS writer Rob Kutner in making a funny little strike-info video (here, and below). Here's a sampling from Axler's piece, which is the second-most emailed Styles article (ironically, number one is "Too Much Information? Ignore It." The wisdom of crowds). Axler:

Look — this is weird for us, too, you know. Writers are not a naturally combative species. We're used to sitting in front of our computers and crying. Fresh air is like poison to us. If protocol didn't dictate otherwise, it's very likely we would never wear pants. But we've given up our salaries and our jobs -- easily the only jobs we're qualified for -- to stand outside and yell at people. So, for the sake of decency, could you please not yell back?

Tuesday, 1 p.m. Back on the walkin' oval. I wear four sweaters on my torso and one wrapped around my head. If I were at work today, what would I be doing? Probably working on a 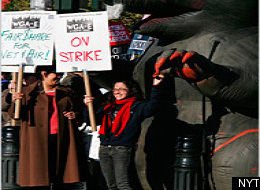 Thursday, 10 a.m. After 13 hours of walking in our tiny oval tundra, I no longer fear hypothermia. Sunlight and I have developed an acquaintance that may yet blossom into friendship (or more?). But somewhere from the depths of my denial -- from that secret place where I'm still trying to convince myself that this is just a very weird vacation -- worries begin to emerge. How long can the networks drag this out? Might this actually take weeks? Months?

With no brilliant new lines from "30 Rock" or "The Office," will we be reduced to quoting F. Scott Fitzgerald? What if we're not back on the air for some huge, important new story? Or even something minor, like the presidential primaries?

She has a point — one Maureen Dowd picks up in her column this weekend, where she notes that Rudy Giuliani had a horseshoe wedged somewhere for Bernie Kerik's indictment to have come down "after the TV zone of ridicule was blacked out." Also packing horseshoe: Dowd, who was able to eke her second "borrow a comedian" column out of it, grabbing SNL head writer and co-Weekend Anchor Seth Meyers for a few bon mots. Alas, it's in print so we can't see his dimples. Damn, studios, give these writers a deal so we can get them back on TV!

Sorry, back on topic: Obviously HuffPo has been a massive outlet for writers looking to voice their opinions on the strike (see our Writers' Strike Opinion Page!), as well as Slate, the LAT, NYT, New York, and the New York Post, as today's NYT points out. That's of course the written material (not for TV, so allowed), but it's the video moments that are winging 'round the net that are more interesting, both in terms of how fundamentally they represent the problem here (per Office writer/co-producer Mike Schur: "You're watching this on the internet, a thing that pays us zero dollars") and in terms of the impromptu moments they are capturing with an amazing collection of people (see this video featuring various showrunners from Lost, ER, Family Guy, Scrubs, The Shield, King of the Hill and The Office stepping up for their writers; Garry Marshall — creator of Happy Days, The Odd Couple, Mork & Mindy and Laverne & Shirley — giving some perspective on his fifth strike; and "Buffy" creator Joss Whedon, who explains that it's not about more money but a fair share when the studios make more money (the Whedon one was just added this morn, but expect slavishly-devoted Buffy and Firefly fans to rack up the views in short order. Dude is like a God to them). It's also sort of sweet to see a bunch of jaded, ironic writers chanting together in earnest like cadets at a boot camp. All great TV moments...for the digital age.

Also notable is this video of Jay Leno voicing his support for the strike, and answering reporters' questions, some inane like "Are you supporting the writers?" (er, note picket line) and "Is your show canceled indefinitely?" to which he clarified with exasperation that no, idiot, these shows hadn't been canceled. (To be fair, Larry King planted that question). Note how he jokes with reporters that he's not being funny right now because he has no one writing his stuff: "If the writers were actually working right now, I would be hilarious. I am an empty shell, waiting to be filled in with the material written by these folks." Turns out he is being funny — funny enough to reuse the material, at least: Because in the showrunner video, here's Jay again, telling reporters: "If there was no strike I'd be hilarious right now — I'd be killing! But as you can see, I am an empty shell who needs to be filled in by the writers." Let's hope someone got a residual on that.

So, all that said: Enjoy these WGA videos. And maybe don't watch a reality show tonight.