It is fairly obvious that yoga in the Western world is a discipline dominated by women's participation. So it may be surprising to learn that yoga was actually created by men and historically practiced by Indian warriors to strengthen themselves both physically and spiritually for battle. Sixteenth to 18th century India even saw some areas hire out bands of yogis as mercenaries (making Warrior Pose all the more aptly named).

Suddenly, the Seattle Seahawks' mandated yoga practice as part of their football training doesn't seem so hippy dippy anymore. In fact, men's general participation in yoga has skyrocketed in the past few years, rising to 27 percent in 2013.

Part of this is due to the work of male yogis (women are actually called "yoginis") such as Patrick Beach and Dylan Werner, who have helped show the world through their social media presences what yoga can be and how it is for everyone. 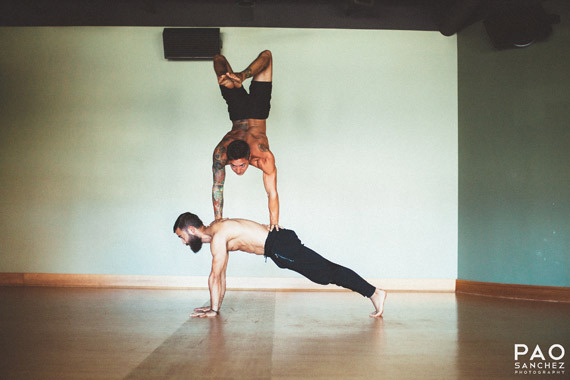 "When yoga came to America it was all stretching postures, so there was this huge stigma with it not being physically challenging, or not for people who lacked flexibility," says Beach. For guys, the dissonance between expecting a yoga class to be "easy" and then struggling for an hour to hold poses can be a big deterrence.

Werner explains, "Having a lot of weight in the arms, like Warrior Two with the arms out, that's hard for people. And then you take it with the girl who's next to you who's 100 pounds and can hold down-dog all day; sometimes it's discouraging or emasculating."

But yoga is all about balance. What men lack in "natural" flexibility, they make up for in strength. In fact, the advanced yoga poses Beach and Werner have become famous for are poses that many women cannot achieve in the same amount of time as men, due to natural differences in muscle mass. 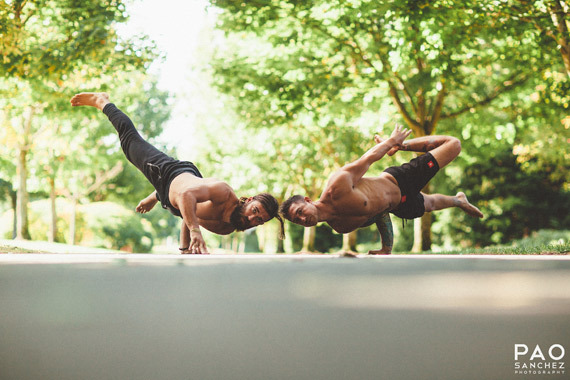 Werner used to be a firefighter before making the switch to yoga instructor and "is an amazing athletic talent, he has moves that probably five people in the world can do," says Beach of his fellow yogi. Werner and Beach recently worked together on an online yoga video series -- one of the first of its kind -- that covers advanced inversions and transitions. "There was a mutual respect for each other," says Werner, of working with Patrick Beach for the first time.

Here are three more insights from Dylan and Patrick on men's participation in yoga:

1. Yoga is definitely not just for women...

Beach and Werner both had something in common when they started: They didn't walk in with stereotypes in their heads.

"I never felt like it was a 'woman's' sport, especially because of how you can take it, and how strong you can get from it," says Werner.

In fact, sometimes it's more fun without the girls.

"I do 'Acro,' which is AcroYoga. It's usually a male and female, with the man as the base and the female flying. Except a lot of times I like to fly and I like to do all that stuff, because when you have two guys who are strong you can do different moves. Sometimes we'll coin that as 'Man-cro,' like 'Man-Acro.'"

I sincerely hope "Man-cro" catches on.

Likewise, Beach "never thought about yoga as being a male or female thing, I thought of it as something where I could learn." Beach, who is known for his work with inversions, first got into yoga after trying out his local studio. "There were a few people in there doing crow and headstand, which was the first time I had ever seen people do things like that... It was like 'Wow, look at how much fun yoga can be.'" 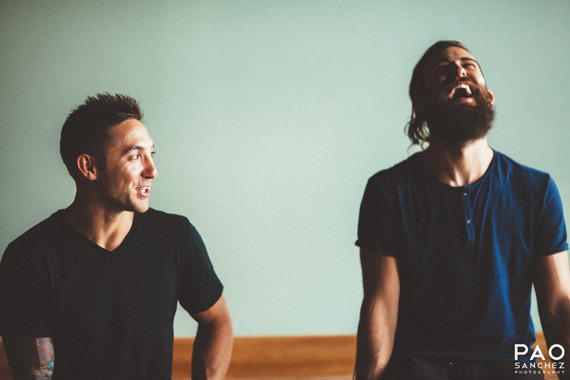 2. But yoga can be a good place to meet women (if that's your thing)

"Taking yoga classes full of girls is never a bad thing," says Werner. In fact he met his girlfriend, another prominent yogini, Ashley Galvin, through yoga and went on to pursue his teacher training because he wanted to support her on her journey towards becoming an instructor.

Beach notes, "When I started there were attractive girls at the studio so I think that actually helped. I was single at the time and there weren't many other younger fellas in there." He is now also business partners with his fellow yogini girlfriend, the Carling of Patrick and Carling Yoga.

Lululemon has announced that it plans to roll out men's storefronts in 2016; however, only 12 percent of its sales come from its menswear line. "Men's yoga clothes are the worst. It drives me crazy... I feel all this stuff is designed by women that have no idea how to make clothes for men," says Werner, who mostly practices in board shorts. Anecdotal evidence shows that many male yogis will shop the women's section of Lululemon in search of a more unisex fare, like pants where "the crotch isn't down to my ankles."

Meanwhile, Beach has taken matters into his own hands and circumvented this yoga menswear conundrum. "I designed my own clothing line for men's yoga and lifestyle stuff this year, and have been testing out product for the last six months, so everything I have been wearing has been my own," he elaborates. Patrick's brand is called Pure Balance, so maybe he will beat Lululemon to the punch.

Men on the mats, for the right reasons:

While some men's publications try marketing yoga to their readers with promises of improved sex lives (not that this is untrue), the real shift of men in yoga has come from a deeper understanding of what yoga is, thanks to guys like Werner and Beach. Yoga trains not just for strength, but for holistic strength: balance, flexibility, body awareness, and eventually, even self-discovery.

Time to say ohm and get strong!