In a little-noticed but potentially explosive remark last Friday, Senator Dick Durbin (D-Ill.) accused Republican leadership of signing a political pact with the banking industry: in exchange for help defeating a measure that would make it easier for homeowners to restructure failing mortgages, GOP leadership in the Senate would help banks defeat any additional efforts at regulatory reform.

The allegation of a quid pro quo was based on an email that Durbin received last spring after his amendment to allow judges to modify mortgages for homeowners who enter bankruptcy was defeated on the Senate floor. During a discussion to promote publicly-financed elections on Friday, the Illinois Democrat relayed that, shortly after the defeat of his "cram-down" amendment, a "banker friend" forwarded him the note from Tanya Wheeless, president & CEO of Arizona Bankers Association.

"I have contacted the market presidents for each of the three banks (Chase, Wells and Bank of America) and explained that in my humble opinion it's a big mistake to cut a deal with Durbin and alienate our (in Arizona) Senator," Wheeless's email reads. "I also told them that I thought this would drive a wedge in our industry. [Senator Jon] Kyl has pointedly told them not to make a deal with Durbin and then come looking to Republicans when they need help on something like regulatory restructuring or systemic risk regulation."

"I know the (sic) every state association will have to do what's best for its members, but I have told my largest three members that if they cut this deal, AzBA will fight them on it. They may be willing to alienate Republican leadership, but I'm not quite there yet."

The email, pasted below, was passed to the Huffington Post by Durbin's office. 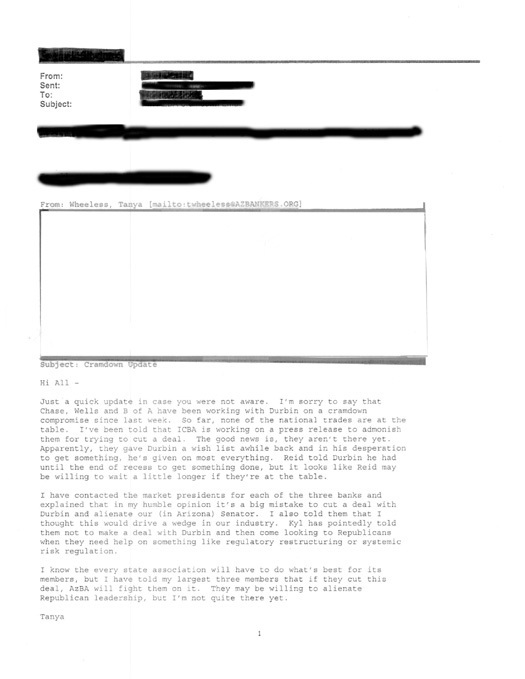 The implication seems fairly clear: banks were being warned that if they negotiated with Durbin on cram-down, they were risking GOP support on regulatory reform. That the banking industry would take such a stance isn't entirely surprising, when one considers the narrow financial interests that influence the industry. But the willingness of the GOP leadership to, apparently, use regulatory reform as a cudgel to pressure banks is illuminating of the horse-trading process that occurs behind the legislative curtains.

At the very least, it shows just how stacked the deck is against passing consumer-oriented reforms. In the end, cram-down was defeated not once but twice on the Senate floor.

Durbin said on Friday that, back then "I talked about the fact that when it comes to the banking lobby, they own the place. It might have been an overstatement. But not by much. One of the people I ran into afterwards said [the statement] was like a bolt of lightening in a swimming pool. It just woke everybody up that something is going on, on Capitol Hill."

The email, he added, "is a total smoking gun as far as I'm concerned. It tells the whole story and it is in writing as to what is happening behind the scenes... So when people say I don't know if we should have public financing because that is my tax dollars, I can tell them that their resources, whether tax dollars or personal wealth, are being impacted every day by decisions being made by the special interest groups."