NASA's Kepler space telescope has discovered three exoplanets that may be capable of supporting life, and one of them is perhaps the most Earth-like alien world spotted to date, scientists announced today (April 18).

That most intriguing one is called Kepler-62f, a rocky world just 1.4 times bigger than Earth that circles a star smaller and dimmer than the sun. Kepler-62f's newfound neighbor, Kepler-62e, is just 1.6 times larger than Earth, making the pair among the smallest exoplanets yet found in their star's habitable zone — the just-right range of distances where liquid water can exist on a world's surface. 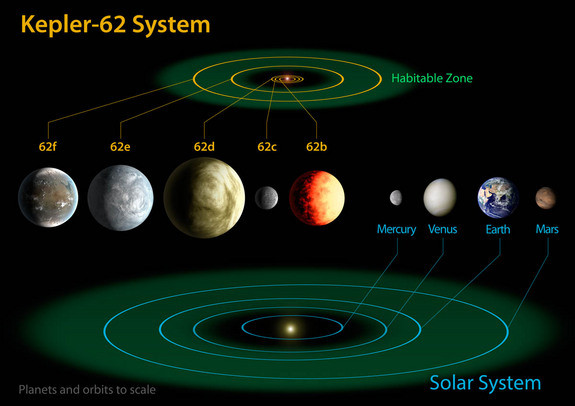 This diagram compares the planets of the inner solar system to Kepler-62, a newfound five-planet system with two potentially habitable worlds. Kepler-62 lies about 1,200 light-years from Earth, in the constellation Lyra.

The third potentially habitable planet, called Kepler-69c, is 1.7 times bigger than Earth and orbits a star similar to our own. It's the smallest world ever found in the habitable zone of a sunlike star, researchers said, and represents a big step toward discovering the first-ever "alien Earth."

"We're moving very rapidly toward finding an Earth analogue around a star like the sun," Borucki told SPACE.com.

Researchers announced these newfound planets — all three of which are "super-Earths," or worlds slightly larger than our own — today at a NASA news conference. The Kepler-62 discovery paper, led by Borucki, was also published today in the journal Science.

The three potentially habitable worlds are part of a larger haul. All told, the scientists rolled out seven new exoplanets today — five in the Kepler-62 system and two in Kepler-69.

The five newfound planets in the Kepler-62 system, which is located about 1,200 light-years away in the constellation Lyra, range from 0.54 to 1.95 times the size of Earth. Only Kepler-62e and f are potentially habitable; the other three zip around the star at close range, making them too hot to support life as we know it, researchers said.

Kepler-62e and f take 122 and 267 days, respectively, to complete one orbit around their star, which is just 20 percent as bright as the sun. While nobody knows what the two exoplanets look like, a separate modeling study suggests they're both probably water worlds covered by endless, uninterrupted global oceans. [Two Habitable Alien Water Worlds? (Video)] 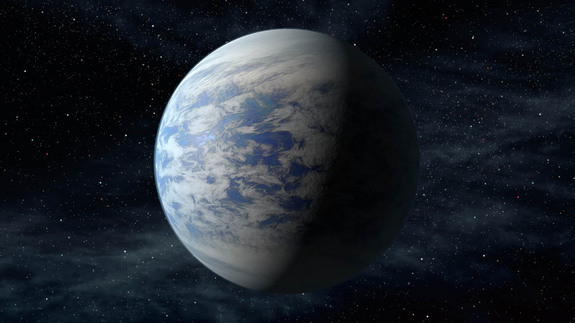 The artist's concept depicts Kepler-69c, a planet 1.7 times the size of Earth that orbits in the habitable zone of a star like our sun, located about 2,700 light-years from Earth in the constellation Cygnus.

"There may be life there, but could it be technology-based like ours? Life on these worlds would be under water with no easy access to metals, to electricity, or fire for metallurgy," lead author Lisa Kaltenegger, of the Max Planck Institute for Astronomy and the Harvard-Smithsonian Center for Astrophysics, said in a statement.

"Nonetheless, these worlds will still be beautiful blue planets circling an orange star — and maybe life’s inventiveness to get to a technology stage will surprise us," she added.

Not surprisingly, Kepler-62e should be warmer than its more distantly orbiting neighbor. In fact, Kepler-62f may require a greenhouse effect to keep its ocean from freezing over, researchers said.

“Kepler-62e probably has a very cloudy sky and is warm and humid all the way to the polar regions," co-author Dimitar Sasselov of Harvard said in a statement. "Kepler-62f would be cooler, but still potentially life-friendly."

The new modeling study has been accepted for publication in The Astrophysical Journal.

The $600 million Kepler observatory launched in March 2009 to hunt for Earth-size exoplanets in the habitable zone of their parent stars. Kepler finds alien worlds by detecting the tiny brightness dips caused when they transit, or cross the face of, their stars from the instrument's perspective.

Kepler has used this technique to great effect, spotting more than 2,700 potential planets since its March 2009 launch. While just 120 or so of these candidates have been confirmed to date, mission scientists estimate that more than 90 percent will end up being the real deal.

While Kepler has yet to discover a true Earth twin, it's getting closer and closer, Borucki said, pointing to the confirmation of Kepler-69c as an example. (That planet lies 2,700 light-years away, in the constellation Cygnus. Kepler-69c's neighbor Kepler-69b, which is about twice the size of Earth and too hot to host life, was also announced today.)

"I think we're making excellent progress in that direction," Borucki said. "We have a number of candidates that look good."

Such steady progress makes sense, since Kepler will of course spot more transits the longer it looks. The telescope needs to observe three transits to flag a planet candidate, so detecting a potentially habitable world in a relatively distant orbit can take several years.

Kepler cannot search for signs of life on worlds like Kepler-62e, Kepler-62f and Kepler-69c, but the telescope is paving the way for future missions that should do just that, Borucki said.

"This is one of the early steps, but there's no mistake — we are on our way to explore the galaxy, to learn about life in the galaxy," he said.