Budget European airline EasyJet has apologized for publishing fashion photographs in its in-flight magazine that were taken at, of all places, a Holocaust Memorial in Berlin.

The photos were discovered by the New Statesmen, a British magazine, on Friday. After the magazine brought them to the airline's attention, EasyJet withdrew all copies of the magazine. The airline also appears to have pulled them from the in-flight magazine's website, although you can see one of the photos archived here.

The two offending photos appeared in the November issue of the airline's in-flight magazine as part of a feature marking the 20th anniversary of the fall of the Berlin Wall. The photos featured models posing at what is known as the "Field of Stelae," which opened in 2005 and was designed by American architect Peter Eisenman.

A spokesman for the airline said in a statement published by the Telegraph:

EasyJet profusely apologises to anyone who may be offended by the inappropriate fashion photo shoot at the Holocaust Memorial in Berlin featured in this month's issue of the in-flight magazine. The magazine is produced by INK - an external publishing house, and easyJet were not aware of the images until they appeared in print.

According to the BBC, INK did not seek permission from the Foundation for the Memorial of the Murdered Jews of Europe to take the photographs.

Here is one of the photos: 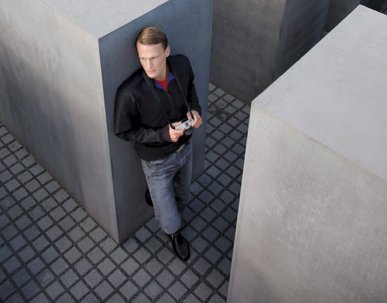