Millions of Americans love pork products. On average, we eat more than 40 pounds of pork per person every year and the U.S. is second only to China in pork consumption. That's a lot of pigs.

More than 100 million pigs are killed every year in the U.S. and the pork industry produced over 23 billion pounds of meat in 2012. The massive industrial operations needed to supply America's pork hunger also have a significant environmental impact. Agriculture, including animal feeding operations, is the most common pollutant of U.S. rivers and streams, according to the Environmental Protection Agency. The enormous, toxic waste lagoons attached to some animal feedlots can even be seen from satellites.

A less destructive, but still frustrating, problem also exists in the U.S.: feral hogs. Over the past several decades, the offspring of escaped domestic pigs, invasive Eurasian wild boars, and hybrids of the two have proliferated across parts of the U.S. In Texas, which may be the epicenter of the problem, an estimated 2.6 million hogs roam free, according to the Houston Chronicle.

These aggressive hogs run wild across natural areas, damaging wetlands and other habitats and out-competing native species for limited food supplies. They are omnivorous and will eat everything from grasses, acorns or mushrooms, to insects, amphibians, birds and even dead animals. They will also eat or trample crop fields, and cause an estimated $52 million in damage to Texas agriculture every year. 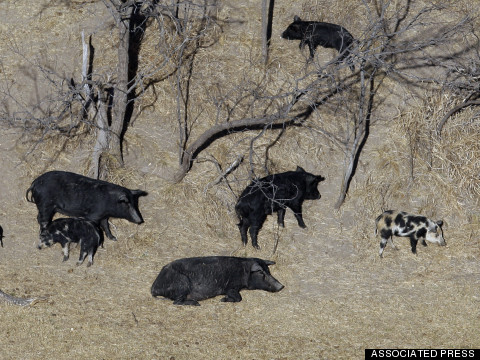 Hunters kill hundreds of thousands of the feral hogs and wild boar-hybrids every year, yet their populations continue to increase. If cooked properly, their meat can create a tasty source of protein that is leaner than traditional pork and didn't take a massive operation to produce.

In the video above, New York chef Simpson Wong tells The Huffington Post about growing up in Malaysia eating Eurasian wild boar. (These boars were first introduced to North America in the late nineteenth century.)

"They are big. They are crazy. And they are fierce," he says. "But they're also delicious."