ALEXANDRIA, Egypt -- A massive election turnout in this largely conservative Muslim coastal city has contributed to what many are estimating to be a sweeping victory by Egypt's Islamist parties in the country's first democratic elections this week.

The voting, which began Monday in the country's largest metropolitan areas and continues into January, will decide the makeup of the country's first elected parliament since the ouster of strongman Hosni Mubarak. The newly-elected body will be empowered to craft a new constitution.

But as preliminary results and rough polling data emerged Wednesday, it became increasingly clear that the country's conservative Islamist parties are likely to fare even better than anticipated -- and may even garner an outright majority of the seats, rather than just a large plurality.

Reuters reported midday Wednesday that the Muslim Brotherhood's Freedom & Justice Party, the largest single movement in the country, was expected to pull about 40 percent of the vote. Together with a bloc of more extreme Salafists, the total proportion of the vote that goes to Islamists in this round -- thought to be the most liberal of the three voting regions -- is likely to top 50 percent.

Early polling showed that Islamists have the support of about a third of Egypt's population. But as elections commenced, just nine months after the fall of dictator Hosni Mubarak, Islamist parties have been aided by exceptionally sophisticated get-out-the-vote programs, as well as the inefficiency and fracturing of the country's new secular and liberal parties.

Here in Alexandria, Egypt's second-largest city, where the Muslim Brotherhood and Salafists are a dominant part of the landscape, the disproportional organizational strength of the Islamist parties was clearly on display during the two days of voting, Monday and Tuesday.

While the Freedom and Justice Party (FJP), the political wing of the Brotherhood, said they had approximately 10,000 volunteers on the streets assisting voters and distributing fliers during the two days of voting here, the more secular and liberal parties paled in comparison. The Free Egyptian party, one of the better-financed and operated of the new liberal parties, told The Huffington Post that they had about 400 street workers, while Al Adl (Justice) put their total number of volunteers at just 12.

"We have a manpower issue, this I can admit," Tamer Adel, the Alexandria political director for Al Adl, said during a midday break in his office on Tuesday.

"What you saw yesterday, it was the result of the fact that the Brotherhood has been working in Egypt for 80 years. They have the base, they do good work with their community -- they know the process well. We are only three months old."

On Tuesday afternoon, even at a polling station in the relatively secular and upscale Rushdi district, where Islamists do not have a major demographic advantage, the sidewalks around the site were clogged with volunteers from the Muslim movements, especially the FJP.

Two bearded Salafists, supporters of the popular Nour Party, smiled when asked about their odds of success in the elections.

"I think we will do very well," one of the men said softly. "Maybe not in this area, because the people here are not very religious, but I know that in my village for example we will have the support of 100 percent of the people."

Further down the street, half a dozen young women from the FJP sat around a table with two laptops, ready to assist any voters who needed to know their state-issued voter ID numbers. They wrote the ID numbers on a small sheet of paper that, on the back, helpfully listed the two candidates that FJP preferred they vote for.

Activists and liberal party politicians have complained that the FJP tactics -- and especially their tendency to hand out partisan literature to voters waiting in line -- violated a law against campaigning at voting sites. Muslim Brotherhood officials have denied that they broke any laws.

"They're just here to help the voters," an FJP official named Walid el Kahky, who identified himself as a supervisor, said. "They're not trying to influence anyone."

At the offices of the Free Egyptian party, one of the better financed of the new liberal movements, campaign workers seemed less concerned about legal violations and more in awe at the extent of the FJP's mobilization.

"It was very impressive, to be honest," said Mouhira Saleh, the Free Egyptian's Alexandria political director. "There are nearly 500 stations in Alexandria, and in front of each one of them yesterday the FJP had not less than seven people. Each of them in matching uniforms. It was raining, and they even had matching yellow raincoats -- raincoats!"

Saleh added that since judges and police seemed willing to permit the FJP volunteers to "assist" voters with leaflets, she had ordered the party to print hundreds more overnight, for distribution Tuesday.

On Wednesday, as results started to trickle in, many political analysts began to turn their attention to what sort of rule the Islamists may seek to impose, should they truly end up with a full majority in the parliament.

In the short period since voting ended, the much more substantial Brotherhood has already begun to send mixed signals about its own intentions, a trend that has many liberal observers worried.

One leading Brotherhood official Essam alErian, told The New York Times on Tuesday that the party was likely to escalate pressure against the ruling military regime to allow this parliament to appoint the Prime Minister. Until now, the new parliament has only been entrusted with the responsibility of drafting a constitution, while the military has retained much of the executive authorities. Proper civilian presidential elections are expected to take place next summer.

But another journalist who recently interviewed el-Erian, the Christian Science Monitor's Kristen Chick, wrote Wednesday on Twitter that she found him to be far more conciliatory about the relationship between parliament and the military.

Meanwhile, the Salafists, many of whom individually have a calm pleasantness that belies their unjust reputation for being associated with terrorism, are expected to take a ruthlessly conservative line on social issues.

In an interview a week before the election, Nader Bakkar, a spokesman for the Salafist Nour Party, in Cairo, told The Huffington Post that under an Islamist regime in Egypt, alcohol would be banned, and women would be required to dress conservatively in public. He also said that Islamic law would offer protections to Christian religious minorities, and suggested that, in his opinion, "What has happened to Jewish people in the Second World War is not true."

The Brotherhood has promised to hew a more centrist line, but many believe that the Salafists -- should they take a significant enough portion of the vote -- may end up pulling the Brotherhood even more to the right, if they form a proper legislative coalition.

"It seems likely the discourse is going to be mainly between one set of Islamists and another set of Islamists," said Michael Wahid Hanna, an Egypt expert with The Century Foundation who is in Cairo for the elections. "Depending on what the Brotherhood chooses to do, they could just carry on a conversation with Islamists, and isolate the other political elements, like the liberals."

The rise of Islamists in the elections poses a significant dilemma for the liberal parties, many of which had been engaged in a fierce struggle with the ruling military regime currently in control of the country. But they now quietly acknowledge that a powerful military may be their best hope to hold off sweeping changes from an Islamist controlled parliament.

On Tuesday, Adel, the Justice Party operator, expressed optimism that despite the results, the campaign would end up being a learning opportunity for new parties like his, and maybe a positive first step for the country.

"We just participated in our first political experience in our lives, and it's also not yet over," Adel said. "But we do not believe that fair elections are the last step in the democratic process ... I hope yesterday was just the start." 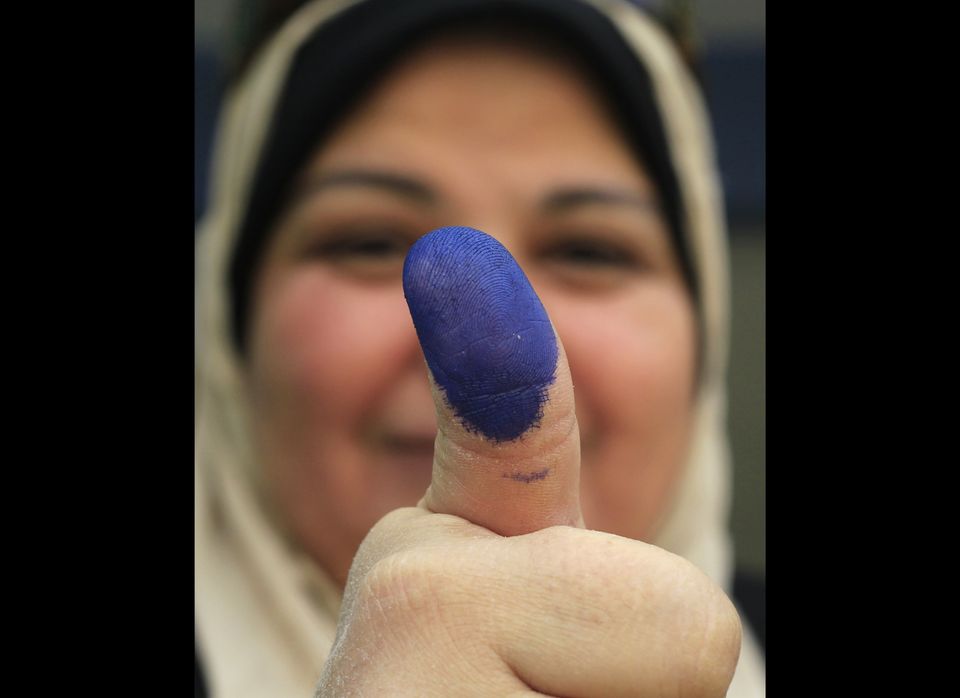 1 / 10
An Egyptian woman shows her ink-stained thumb after voting at a polling station in the Manial neighbourhood of Cairo on November 28, 2011. Post-revolution Egypt headed to the polls for a chaotic election clouded by violence and a political crisis, the start of a long process to bring democracy to the Arab world's most populous nation. (MAHMUD HAMS/AFP/Getty Images)
Getty