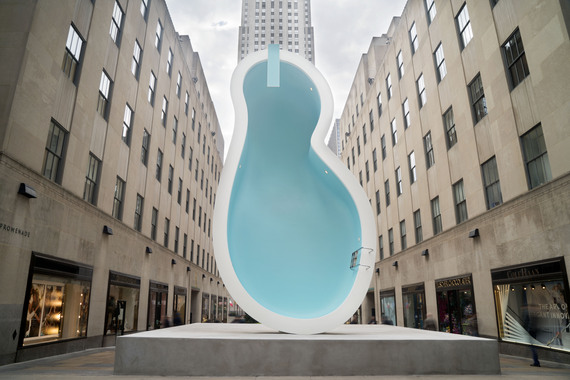 This spring, Public Art Fund and Tishman Speyer have organized an out of this world exhibition by artist duo Elmgreen & Dragset at the Fifth Avenue entrance to Rockefeller Center. Standing 9m-high, Van Gogh's Ear takes the form of a swimming pool sitting upright, adorned with a ladder and diving board and brightened by its cyan blue interior.

Van Gogh's Ear is inspired by Marcel Duchamp's readymades and positioned to stand out amongst NYC's bustling environment. As if uprooted from its usual environment, the large-scale, surrealistic work evokes a cerebral, poetic and aesthetic approach to its setting.

"The sculpture recalls the 1950s-style pools found in front of some Californian private homes, in contrast to this very public East coast urban setting. It is as if an alien spaceship had landed in the midst of this prominent and busy environment," said Elmgreen & Dragset. "One can dream of lazy days under the sun while surrounded by all the traffic and business going on at Rockefeller Plaza."

The duo, who have worked together since 1995, are best known for their 2005 public project, Prada Marfa, in which they created a faux Prada store located in the middle of the West Texas desert. Similar to the store, Van Gogh's Ear brings attention to its context through its otherness.

Van Gogh's Ear is on view at the entrance to the Channel Gardens until June 3, 2016. It will travel to the K11 Art Foundation in China. 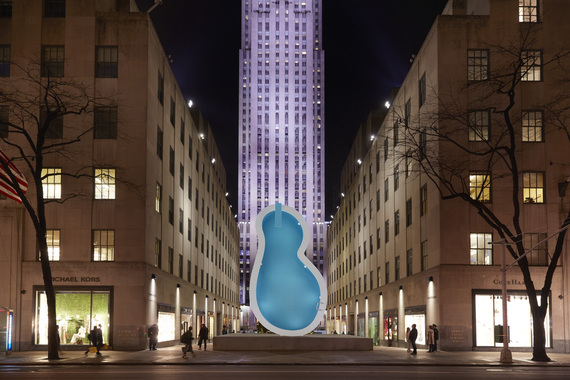