Seung-il Byun is a traditional Korean painter, noted for using circular canvas and depicting pastoral landscapes of the Joseon Dynasty. He is even more famous, however, as the president of the Korea Association of the Deaf, where he is a fierce advocate for deaf people across the peninsula. "My goal is to promote artistic and cultural exchanges between the Northern and Southern communities of Deaf Koreans," he said at an interview in central Seoul, using his preferred Korean Sign Language. "It is critically important. Non-hearing people in North Korea have very little contact with the outside world." 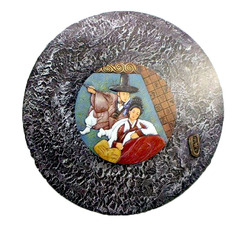 One of Mr. Byun's paintings in the traditional style

Mr. Byun has made it his life's work to advance the rights of deaf people in his home country. "Non-hearing people from across the peninsula need to support each other," he explained, running a hand over a brochure from his latest solo exhibition of paintings. "Historically, we are a marginalized group with many shared experiences, and that's why I write the word with a capital letter in English. Deaf Koreans will face unique challenges upon national unification. Academic, artistic, and cultural exchanges help us prepare for that day."

With the help of Pyongyang-based NGOs, Mr. Byun has attempted to travel to North Korea three times in order to conduct such work. So far, he has been unsuccessful. "I tried to visit Pyongyang through the embassy in Germany," he explained, "but because of the recent hydrogen bomb test, my January 2016 trip was cancelled. I have permission from the South Korean Ministry of Unification to travel in the North. Unfortunately, things aren't working out as planned."

Nonetheless, he has been an inspiration to those working on the ground in the North Korea, including Robert Grund, a German national who runs a handicapped education center called Together Hamhung. Over e-mail, Mr. Grund commented: "Byun Seung-Il is my role model...he is our hope for the 'inclusive' reunification of the Korean Peninsula. He is probably the first Deaf [person] from South Korea to clarify that the Deaf issue should not be excluded from the inner Korean dialogue for the peaceful reunification." 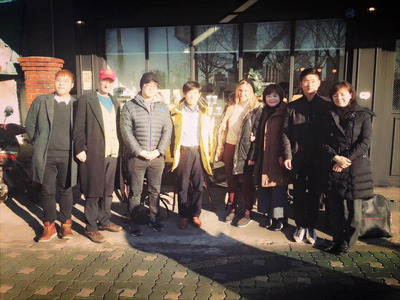 Mr. Byun, center, stands with attendees of an Asia Institute seminar on his work.

Like Grund, Mr. Byun prioritizes the needs of those living in rural provinces, such as Wonsan and Hamhung. "It's extremely difficult for people from these areas to communicate with people from the capital," he explained. "Resources are not evenly distributed. The World Federation of the Deaf visited one school in the North, and 98% of the students were illiterate."

High illiteracy rates have made escape from the Kim regime virtually impossible for Deaf individuals. Inability to read renders even pencil-and-paper communication - already an inefficient way of expressing urgent, immediate needs - as useless. Even registered NGOs designed to help North Koreans are poorly equipped to meet the needs of handicapped refugees, who often have no understanding of Korean or International Sign Language.

Mr. Byun is deeply frustrated by the compounded human rights issues this subset of the North Korean populace faces. "They aren't even able to represent themselves," he said, pointing to a logo on his padded yellow coat. "There was a world sporting event held in South Africa called The Deaflympics. North Korea did send representatives, but those people were hearing. How does that give us a voice?"

There have been some hysterical claims in the media that people who are handicapped in any way are automatically murdered in North Korea. Mr. Byun has firmly established as false. "I have heard of these rumors, but they are not true. Still, life is very isolated for Deaf North Koreans. It is nearly impossible for them to communicate with hearing people. This struggle exists even in the South. As a child, I struggled to express myself with classmates, and that was very isolating. We have a lot of work ahead of us."

Mr. Byun plans to attempt to travel again to North Korea again with the help of various NGOs. "This is not something I will compromise on," he said. "All Deaf Koreans deserve representation."