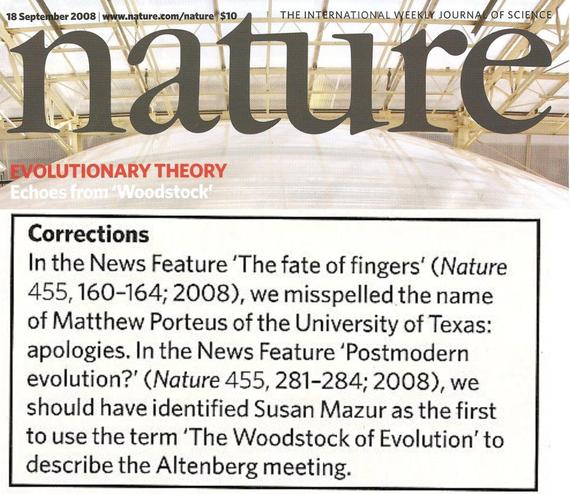 Snorting, with nostrils flared and smoking, the beast stands its ground: We knew it all the time! We knew it first! No mere journalist is going to set the tone for the Academy! You can't be cited in the official record. TAKE THAT! OUT! And if that's not enough, we will sic our Internet trolls on you. And we will bury you!

Indeed, while snobbery, thievery and warping of history by the mainstream media has slowed to a degree because of various legal challenges -- the science mafia, in its attempt to protect turf by cleansing the official record, continues to circle the wagons and pick off the work of freelance journalists as fair game. Sadly, a recent issue of the semiotics journal Sign Systems Studies (University of Tartu Press) is a case in point.

It features an article, "What kind of evolutionary biology suits cultural research?" by theoretical biologist Kalevi Kull, one of the journal's editors. It is largely a summation of the recent Royal Society conference in London on "new trends" in evolution that begins with an interesting sketch of evolution science events that Kull sees as pivotal leading up to said London meeting.

In the opening pages of his article, Kull decides to cite the July 2008 Altenberg conference as one of those pivotal events, a meeting of scientists called to determine whether or not an extended evolutionary synthesis was needed. I was barred from attending Altenberg for getting out in front of the story.

Kull then proceeds to mention branding of Altenberg as the "Woodstock of Evolution," because it created a sensation and put the meeting on the map, gave it life.

That branding took place in a newsbreaking story of mine by the same name, syndicated online March 4, 2008 by Scoop Media: "Altenberg! The Woodstock of Evolution?"

But Kull in his article decides to attribute the "Woodstock of Evolution" to author John Whitfield instead. Whitfield's story actually trailed mine by six months appearing in the September 18, 2008 issue of Nature -- the Woodstock reference on the cover and the Altenberg story that I broke inside, but no attribution to my story. Nature was forced to apologize in the October 2 issue by way of correction and later appended that correction to the Whitfield story.

Here's how Kull phrases the matter in his recent article, which serves to reinforce Nature magazine as the source:

"An Altenberg symposium held in 2008 was even thought to have become something like the Woodstock of Evolution (Whitfield 2008)."

In his end notes to the article, Kull again cites Whitfield, plus the Nature story reference. No mention of my story as the original source. Of course, if anyone actually decides to look up the Nature reference, and if they have a subscription to Nature, and if they read to the very end of that Nature story, they will eventually find the appended correction.

Although scientists may think a story concept, theme, formula envisioned by a journalist writing online is inferior to a concept dreamed up by a scientist watching the pelicans go by and later planted in science literature -- each of those ideas has the capacity to inspire, to move society or to fizzle.

Kull in defense of his article has told me in correspondence essentially that even though my work is the original source and Nature has admitted theft by apologizing and appending with a correction -- it is still only acceptable for him to cite academic sources in his journal article.

As a result, Kull distorts the history of science to protect the Academy's reputation. I don't turn up in Kull's narrative until 2015, when he cites my book The Paradigm Shifters in which he is an interviewee. But this makes no sense, because The Paradigm Shifters was not published by the academic press either plus the two leading academic science magazines -- Nature and Science have already acknowledged me as the original source.

Here is Kalevi Kull's defense in his own words:

"What was my intention, and what I did, is to make a reference on you calling that "Woodstock". Just this is done in the framework of limitations I'm using. These limitations for me are: avoiding the references to internet sources as much as possible; i.e. referring to traditional academic sources; "Nature" of course is an academic source, which states exactly what is needed . . . I think that science should, as much as possible, avoid introducing the elements of competition-based sports. . . ."

WHY THEN DOES KULL INCLUDE A LIST OF REFERENCES AT THE END OF HIS ARTICLE IF HE THINKS COPYRIGHT IS NOT IMPORTANT?

I also advised Kalevi Kull that putting such an error at the top of his story brings into serious question the accuracy of the rest of his analysis. However, Kull refuses to correct his journal article despite several email exchanges. I was unable to reach him by phone in Estonia for further clarification.

Aside from the above-mentioned problem with Kull's article, and with Nature -- other body blocks by the Academy that I've experienced in recent years include:

-- MIT editors of the official book on the Altenberg symposium refusing to attribute "the Altenberg 16" to me, a term coined online in the "Woodstock of Evolution" story.

-- University of Chicago Press allowed scientist-turned-philosopher Massimo Pigliucci to devote an entire chapter of his book stupidly distorting my credentials. This was Pigliucci's revenge for my getting out in front of the Altenberg story. Pigliucci's book was never reviewed by UCP lawyers prior to publication.

-- According to theoretical biologist Stuart Kauffman, BioScience insisted on dropping a link in his article to my interview with Carl Woese, a story that was also first syndicated online by Scoop Media, even though it was probably the last feature interview Carl Woese gave before he died.

The very foundation of science looks shaky with these kinds of ploys. Just what is the science establishment afraid of? The public who funds scientists finding out they're not on the case?

Indeed, that is just what the public is beginning to conclude as scientists increasingly prefer the stage to the lab; find journalism more rewarding than serious scientific brainstorming; and increasingly compromise their work -- retarding science -- by taking substantial financial handouts from foundations that are not transparent.

The irony of all this is that Harvard Law School included 15 of my stories related to the Rome antiquities-looting conspiracy trial in its 2008 Art Law syllabus. Those stories first appeared online, syndicated by Scoop Media.