Seating arrangements during the French Revolution gave us the Left-Right political spectrum. During the first National Assembly in 1789, the king's supporters sat on the right and proponents of revolution on the left. In contemporary American politics, we often consider liberals, who "believe in government action to achieve equal opportunity and equality for all," to be on the Left. Conservatives, who "generally emphasize empowerment of the individual to solve problems," form the Right.

David Nolan, one of the founders of the Libertarian Party, found this one-dimensional political spectrum problematic. Theorizing "that virtually all human political action can be divided into two broad categories: economic and personal," Nolan believed that "political positions can be defined by how much government control a person or political party favors in these two areas." Nolan's views laid the foundation for The World's Smallest Political Quiz, a ten-question survey which categorizes an individual's political views on a two-dimensional chart. 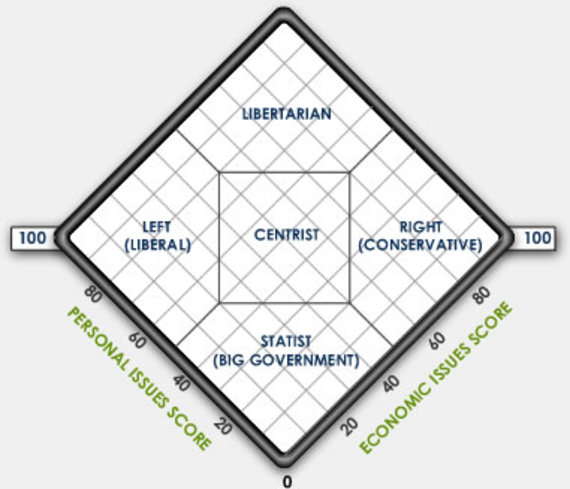 Nolan's categorization scheme, though more descriptive than the Left-Right spectrum, unfortunately suffers from the same major flaw: it presents opposing points of view as ethically and intellectually equivalent. A better system would articulate how different degrees of attention to social justice and the truth drive competing political perspectives.

Published in 1971, the same year that Nolan released the current version of his chart, A Theory of Justice laid out an approach to determining ethics that is widely considered to be the most "fair and impartial point of view...about fundamental principles of justice." American philosopher John Rawls argues that we must consider a thought experiment in which each of us is behind a "veil of ignorance" in "original position:"

The idea of the original position is to set up a fair procedure so that any principles agreed to will be just...Somehow we must nullify the effects of specific contingencies which put men at odds and tempt them to exploit social and natural circumstances to their own advantage...[A]ssume that [all people] are situated behind a veil of ignorance. They do not know how the various alternatives will affect their own particular case and they are obliged to evaluate principles solely on the basis of general considerations.

It is assumed, then, that the parties do not know certain kinds of particular facts. First of all, no one knows his place in society, his class position or social status; nor does he know his fortune in the distribution of natural assets and abilities, his intelligence and strength, and the like...They must choose principles the consequences of which they are prepared to live with whatever generation[, race, class, gender, disability status, sexual orientation, etc.] they turn out to belong to.

The veil of ignorance, by forcing us to consider the possibility that we will be anyone in society, focuses us on fairness and equality of opportunity. Especially given human beings' risk aversion, rational people behind the veil of ignorance would seek to minimize imbalances of power. The ethics of a given policy proposal or viewpoint can be defined by the degree to which Rawls's thought experiment informs our thinking, which generally means the degree to which we contemplate the circumstances of populations with low levels of power and privilege.

A better political categorization tool can capture this thought experiment with a horizontal "ethics axis." "Privilege-defending" viewpoints and policies that ignore the veil of ignorance - those that mainly consider the ideas, desires, and needs of people already in power - fall on the left side of this axis. "Power-balancing" viewpoints and policies developed after reflection about the veil of ignorance - those that more ethically think through the concerns and needs of less-privileged people - fall on the right. The vertical or "accuracy axis" of the tool orients us to the facts; it plots views according to the degree to which a combination of sound theory and empirical evidence informs them. 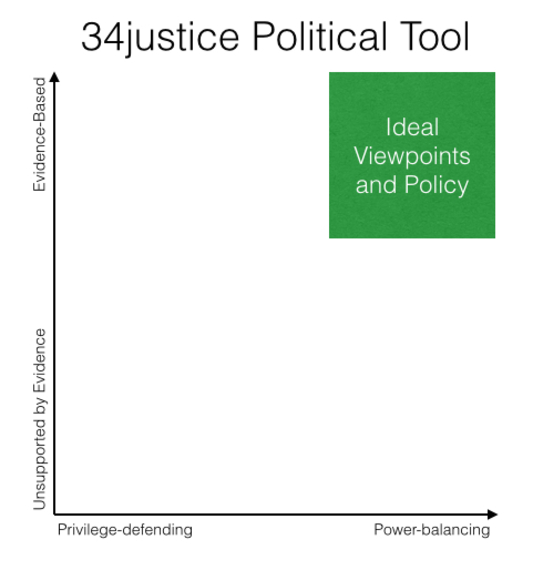 The ideal policy, developed with consideration of the veil of ignorance and using the most accurate interpretation of the facts, sits in the upper right hand corner. This tool thus provides several advantages over the Nolan Chart and the traditional Left-Right spectrum. First, it forces us to think about what matters; we cannot plot opinions on this tool without ethical and intellectual analysis. Second, the tool captures that objectively good policy (policy in the upper right hand corner) is more desirable than the "center" of opposing viewpoints. Third, it gives us a common framework to discuss policy ideas with people with different perspectives, orienting our conversation to two pillars - truth and justice - instead of normalizing disagreement as inevitable.

A case study of the Michael Brown shooting and related events in Ferguson, Missouri can illustrate how to use the 34justice political tool.

The Veil of Ignorance in Ferguson

Ethical considerations require us to imagine ourselves behind the veil of ignorance in original position. We don't know if we're white or black, police officer or regular citizen. We must ask ourselves what sort of policies rational people would adopt in that situation. Given the power differential between police officers and citizens, rational people who knew they might end up as citizens would want a system that set high standards for police behavior. They'd want to ensure that the police force acted with transparency, restraint, and the best interests of the community in mind. Rational people behind the veil of ignorance would also want to make sure police officers could enforce reasonable laws and use force to protect themselves if necessary - they might end up as police officers, after all - but they'd set a very high bar for the use of that force.

Knowledge of institutional racism would also factor heavily into the calculation of the rational person in original position. We are much more likely to harbor subconscious biases against and jump to negative conclusions about black people than white people, and black people routinely face both overt and covert forms of discrimination. A rational person behind the veil of ignorance, knowing that he might become a black citizen, would be especially wary of mistreatment by police. Nobody in original position would agree to a system that placed more responsibility on black citizens than white officers; a viewpoint that did so would consequently be privilege-defending and unethical.

An ethical and power-balancing viewpoint, therefore, approaches the actions of the Ferguson police force with more skepticism than the actions of the black community. It begins with an attempt to understand the concerns and perspectives of black citizens.

We can thus categorize knee-jerk reactions about the Michael Brown shooting and Ferguson, all unsupported by evidence, as follows: 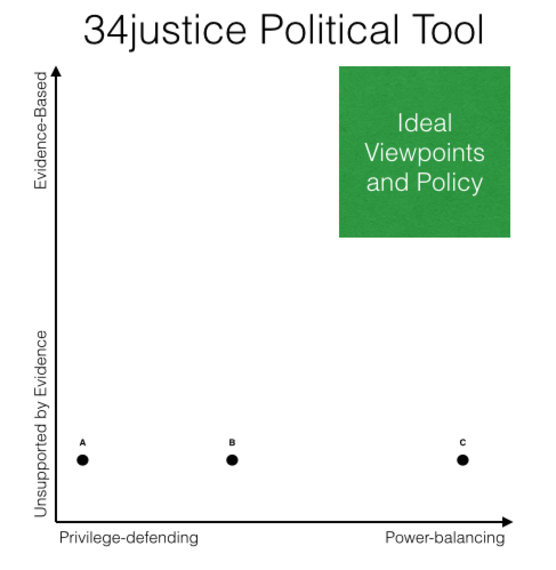 The Accuracy Axis in Ferguson

Here are the facts from the Michael Brown shooting itself:

Commentators have also debated whether several additional facts are related to the shooting:

Finally, the following facts relate to the protests in Ferguson immediately following the shooting:

These facts can help us categorize more evidence-based viewpoints:

The black community's rioting and looting also necessitated police action. Citizens who don't want to experience police violence should avoid doing anything that appears unlawful and/or dangerous. Nothing is wrong with our police system.

The racial disparities in Ferguson are definitely something to look into, but police also probably don't pull people over for no reason at all. And while the police used excessive violence in some cases, the rioting and looting of black citizens was a large part of the escalation of the situation. The citizens in Ferguson and the police must both reflect on their behavior.

It's pretty clear that Michael Brown's death was an unjustifiable murder - not only was he unarmed and shot six times, multiple eyewitnesses consistently report that he had his hands in the air and was no immediate threat to Wilson. The police department's behavior raises considerable doubt about their claims. There was no legitimate reason to delay the release of Darren Wilson's name and the police report for so long, or to ignore eyewitness testimony. The release of the convenience store video was also in bad faith because Wilson almost certainly did not know about this event when he stopped Brown; the police department seems more intent on blaming the victim than on assessing evidence relevant to the shooting. Wilson should certainly get a fair trial, but police behavior has made that less likely to happen. The trials in related cases raise doubts about whether the mostly-white jurors will deliver an evidence-based verdict in this case.

Like
Martin Luther King, Jr.
, we must remember that "it is as necessary...to be as vigorous in condemning the conditions which cause persons to feel that they must engage in riotous activities as it is...to condemn riots. [A] riot is the language of the unheard." These riots are caused by frequent police harassment, unfair treatment by the criminal justice system, and a feeling of powerlessness. Addressing those root causes is where our focus must lie. That the vast majority of protests were peaceful and the police were the aggressors in nearly every conflict underscores the need for rapid reform in the way law enforcement operates.

The ethics and accuracy axes aren't completely independent. It's relatively difficult to find somebody espousing an unethical viewpoint that accounts for all the facts, for example, and Viewpoints D and E require selective interpretation of available information. A privilege-defending but evidence-based viewpoint (Viewpoint G) would have to acknowledge unequal treatment of blacks and police misconduct but, harboring open racial animus, excuse it anyway. 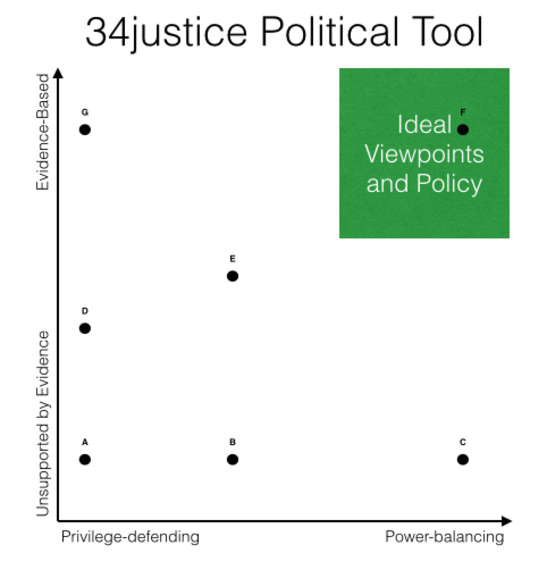 Another category of interest might be viewpoints based on deliberate lies, rather than on a lack of information; they would fall below Viewpoints A, B, and C.

Assuming we agree that ethical considerations and the truth matter, Viewpoint F is objectively superior to the others. Calling Viewpoints A, D, and G "conservative" and Viewpoints C and F "liberal," as we might today, fails to identify fundamentally racist positions as unacceptable. The traditional spectrum also ignores the importance of conducting thorough and accurate analyses. Our traditional political categorization tools falsely suggest that truth and morality are relative. In most cases, like the case of Michael Brown, they very clearly aren't.

If we instead evaluate viewpoints using the veil of ignorance and a thorough analysis of the facts, we will more easily identify the root causes of disagreements. We will also be forced to focus our conversations around ethical considerations and honest dialogue. Over time, we could potentially revolutionize the way we discuss politics.