Last week, Eva Joly, the Norwegian-French magistrate renowned for her fight against corruption, wrote an article slamming British PM Gordon Brown, the International Monetary Fund and the European Union for their harsh treatment of Iceland in the wake of its economic collapse.

Eva Joly gained global recognition when she led the investigation into one of the world's most notorious corruption scandals in the late 1990s, involving the Elf Aquitane oil company in France. She was hired as an adviser to the Icelandic government in spring 2009 to help with the investigation into Iceland's bank collapse, which she has said is "five times more important" than the investigation into the Elf affair. In June of this year, Eva Joly was elected to the European Parliament. 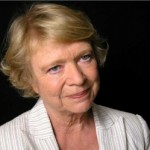 In the article, published simultaneously in several European newspapers, Mme Joly denounces what she calls the "blackmailing of Iceland" by a number of states, as well as the IMF and the EU, into taking on billions of Euros in debt, "which has absolutely nothing to do with the vast majority of its population and which Iceland cannot afford to pay." The debts are from deposits collected by Icelandic banks in the United Kingdom and Holland -- banks that were privately run. An agreement expected to be voted on by the Icelandic parliament this week will require the Icelandic people to cover the debts of Icesave, an online bank that previously operated in the UK and Netherlands.

Iceland is a nation of some 320,000 people. Transposed onto the population number of the United States or Britain, the debt would amount to $5.6 trillion for the US, or £700 billion for the UK.

Unless a radical new approach is adopted, Europe and the IMF are about to perform a major feat: reducing a country whose HDI had, in just a few decades, reached the highest level in the world, to the rank of a poor country.

In her article, Mme Joly slams British PM Gordon Brown for his ruthless response to Iceland's predicament last fall, in which Icelandic assets were frozen under the UK's anti-terrorist legislation, and his efforts to ensure that Iceland gets no international aid until it submits to the UK's terms:

Indeed, at the very start of October, the UK began with a measure of extreme retaliation: freezing of the assets of not only Landsbanki but also Kaupthing Bank, which was totally unconnected to Icesave, using its anti-terrorism legislation. In doing so, the UK lumped the Icelandic people, their allies in NATO, together with organizations such as al-Qaeda....And since then, it seems to be using all of its influence to ensure that no international aid is really given to Iceland until its demands have been met. Indeed, Gordon Brown told his parliament that he is working "with the IMF" to establish how much it considered the UK was entitled to claim from Iceland.

She also accuses the IMF and EU of collaborating in the blackmailing of Iceland; the IMF by placing impossible conditions for its further awarding of loans:

The IMF...attached conditions to them that would seem outrageous, even in fiction. One example of this is the objective of bringing Iceland's public deficit down to zero by 2013, a target that is impossible to achieve but that will nevertheless lead to huge cuts in the most essential areas of spending such as education, public health, social security, etc.

...and the European Commission for siding with the UK:

The European Commission has clearly sided with the UK, as its President announced in November that there would be no European aid until the Icesave case had been resolved. It is true that Mr [Jose Manuel] Barroso [President of the European Commission] -- too busy with his own campaign and terrified of upsetting his main source of support, London -- is, as is often the case, in over his head.

Mme Joly also touches on one of the most serious side-effects of Iceland's economic collapse -- that of mass emigration and "brain drain". In her view, forcing Iceland to take on the debts is futile and may have serious consequences:

The consequence of this is that the Icelandic people, the majority of whom are highly qualified and multilingual and have strong work relationships with the Nordic countries where they can assimilate easily, are already starting to emigrate. In the end, neither the IMF, nor England or the Netherlands will be able to be reimbursed. Just a few tens of thousands of retired fishermen will be left in Iceland, along with its natural resources and a key geostrategic position at the mercy of the highest bidder -- Russia, for example, might well find it attractive.

The Russian angle is one that has gone from a hush to a whisper since Iceland's economic collapse, beginning with rumors of a Russian loan to Iceland, and ending with the confirmation of that loan last month. A news announcement cited the geo-strategic interest Russia now takes in Iceland, potentially in a military sense (the US withdrew its military presence from Iceland in 2005), but most probably in an economic sense, as Iceland's geographical position provides excellent access to the emerging natural resources of the Arctic.

Eva Joly does not discount the responsibility that Iceland's institutions and regulators hold in bringing about the country's economic catastrophe. However, she does have compassion for the Icelandic people, who are left holding the colossal debts of a handful of immoral and quite possibly criminal bankers. With her article, she says, she wishes to call attention to their plight -- a plight to which much of the world has turned a blind eye:

Moved by the fate of Iceland's deserving and likeable people, and the complete absence of discussion in the European media about what the future holds for them, I simply want to draw the attention of public opinion to the issues at stake in this case -- major challenges that are not confined to the shores of this island. The irresponsible attitude of certain countries, the EU and the IMF to the collapse of the Icelandic economy demonstrates their inability to learn from the dramatic undermining of the model that it embodied: one of excessive deregulation of markets, particularly financial markets, that the majority of those same key players contributed to shaping.

Finally, Mme Joly offers up numerous solutions and points out the potential lessons the international community can learn from Iceland's predicament:

Yet the tools and levers for real progress are there; a catastrophe like that in Iceland could finally raise a meaningful international response, instead of the irresponsible and cynical pressures that we can still see today.

Eva Joly's article was published in several European newspapers, including Le Monde, Aftenposten and the Telegraph, in full or part. It can be viewed in its entire unedited version here.