Perhaps the title of the HBO documentary by director Dana Perry might have been called A Family Interrupted. For every completed suicide, one finds a trail of other casualties made up of everyone who ever touched or was touched by that individual. This is the lesson and the legacy captured so artfully and movingly in Boy Interrupted.

I must admit at the outset that my burden in reviewing and analyzing a film has seldom felt quite so heavy.*

The boy referred to in the title of this sobering documentary is the son of the film's director and its cinematographer (Hart Perry), who suffered from a severe and intractable bipolar depression and committed suicide when he was 15 years old. His name was Evan Scott Perry.

I emphasize Evan's middle name because it's difficult to tell Evan's story without knowing something about the life of his paternal uncle, Scott Perry, who also committed suicide at age 21. This piece of family history was known to Evan at a very early age. Evan's -- and to a great extent Scott's -- story unfolds as his parents, his brother, his grandmother, Beatrice, his late Uncle's fiancee, Martine Gerard (engaged to Scott when he died in 1971 remaining close to the Perry family), mental health professionals, teachers, and friends are interviewed. Their stories are juxtaposed with home movies taken from Evan's birth through the days before his tragic death in 2005.

Evan's loved ones have no recourse but to cope imperfectly, admitting they will never be the same. But, too often, the choice of those suffering with intractable affective disorders (Spalding Gray, Primo Levi, and Seung-Hui Cho come to mind) including major depressions, bipolar depressions, and bipolar disorder (sometimes presenting with psychotic features) choose suicide because extreme symptoms such as hopelessness, pointlessness, a gross lack of judgment, impulsivity, distorted perceptions, alienation, and excruciating despair are simply too overwhelming to endure.

The film is powerful even though it offers more questions than answers, as it examines not just one precious, joyful and tragic life, but many lives across three generations -- artists and sculptors, psychiatrists and milieu therapists, teachers and students. Like any exceptional film -- fictional narrative or documentary, released theatrically or on television (where HBO continues to distinguish itself) -- Boy Interrupted captures a bit of magic. 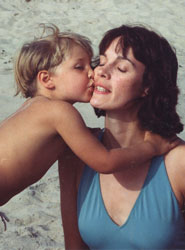 The boy, Evan, and his mother, Dana Perry (also the director),
embrace during happier times in Boy Interrupted.

Evan was as charming as he was exasperating, which are the hallmark signs and the paradoxes one experiences in dealing with bipolar individuals. He could be loving and extremely affectionate -- often curling up in his mother's loving arms -- only to turn around and frighten his devoted family and even his psychiatrist who remarks, "He was the scariest kid I ever saw in my life." His teachers marveled at his zest for life and his obsession with death contending with suicide attempts, one involving climbing to the roof of P.S. 11 in Manhattan and threatening to jump. Evan made numerous suicidal gestures and some homicidal threats. His parents would move heaven and earth in their search for answers and treatment that might save his life.

Evan loved Bob Dylan at an early age singing in a similar, quirky style marked by pathos and less-than-perfect pitch. He wrote lyrics and poetry that rivaled the moodiness of the late, Kurt Cobain, another kindred spirit. He would have run ins with the police and private sessions with a child psychiatrist; receive a misdiagnosis of depression and go on Prozac; be hospitalized at a the private facility Four Winds where he was diagnosed with bipolar depression, take drugs such as Depakote and later, Lithium, a slightly less sedative, mood stabilizer.

All were inadequate treatments with side effects and other cracks through which to fall. Finally, through a treatment modality known as "milieu therapy," exemplified by Wellspring in Bethlehem, CT, which Evan's father describes as an "expensive alternative," he flourished. There, Evan learned that actions have consequences and that boundaries are crucial for order and productivity. Inner demons were exorcised by the healing properties of structure, assignments, and meaningful activities in which social, interpersonal, and therapeutic alliances with seasoned, caring professionals blossomed. This experience -- which few families can afford financially and many others may never hear of -- added years to Evan's life and allowed him to be "mainstreamed" and enter York Prep where he was less precocious -- having formerly existed in the world of old souls -- and became more open to peers.

For a time, Evan was a "next to normal" boy (until he convinced his parents and his psychiatrist to give him a trial off his Lithium, which experience shows is sometimes a sign of a decline in judgment, e.g., expressing the desire to go off medications or secretly stopping them. No one could have predicted how rapidly he would decompensate, how quietly and methodically he would type out his final note in the bedroom he shared with his brother having been left alone there for such a brief time). This concept of living with bipolarity and coping with the side effects of medication, the extreme ups and downs, etc., is explored creatively in a Broadway musical, the Tony-award-winning Next to Normal. (There are other recent films that explore the matrix of creativity, psychology, brain chemistry, and trauma: Shrink, starring the never-less-than magnificent Kevin Spacey; the extremely controversial and personal Death in Love by Boaz Yakin with an inspired performance by Jacqueline Bisset; Seraphine, an exploration of the eponymous artist channeled by actress Yolande Moreau, and the stunning Waltz with Bashir among others.)

The Perry family has devoted itself to creating art (Evan's parents have directed and produced many documentaries; his grandmother, Beatrice, a sculptor also engaged an artist/friend to come to Germantown, NY, from Spain to create a sculpture than adorns the grave of her son, Scott, in a creative process documented in The Rest Is Silence by Hart Perry). The family and their friends offer the audience a gift by testifying so candidly about Evan's life, which continues to puzzle and haunt them.

When authenticity, generosity, traumatic memory, recorded history, and creativity collide, an effective documentary such as Boy Interrupted emerges. The musical score strikes notes that enhance the mood of this film that masterfully frames the devastated faces of Evan's family and friends and makes sure we will not forget him and the health-care enigma and challenge he represents.

*In additional to my membership in The Women Film Critics Circle and being able to write about film -- an art form that never ceases to enthrall me -- on The Huffington Post, Critical Women on Film, and other sites and publications, I am also a member of The American Association for Psychoanalysis in Clinical Social Work, a fellow of The New York State Society of Clinical Social Work, and maintain a psychotherapy practice in NYC. My roots, however, can be traced to internships in in-patient psychiatry at Metropolitan Hospital Center, working with the chronically mentally ill in acute phases of illness, and at VVLP, working with Vietnam War veterans.

I spent 16 years in community and clinic-based psychiatry at St. Luke's-Roosevelt Hospital Center privileged to work with gifted and dedicated clinical social workers, nurse practitioners, creative arts therapists, psychologists, and psychiatrists treating the charming, exasperating, lovable, and irascible individuals diagnosed with and often ravaged by major depressive, bipolar, and schizophrenic disorders. I have witnessed and participated in the treatment of affective and psychotic disorders that were extraordinarily well managed, grossly mismanaged, and everything in between learning that a single clinician, no matter how experienced, cannot possibly successfully treat certain, special patients without a collaborating psychiatric nurse practitioner or psychiatrist and in some cases, an entire treatment team, day program, milieu therapy, and/or relationships with patients' significant others.

I feel a duty to comment, at least in this footnote, not just on this film's effectiveness as art, but on the social policies it might inform.

This film is released at a moment when health- and mental-health care is at a crossroads. Just as education is no bargain (nor should we expect it to be) and remains public, government-funded at local, state, and federal levels, so too should our health-care system, which involves untangling the web of insurance companies and their often unfair practices, which have exploited individuals and made hospitals, clinics, and even some private practices operate more like poorly run factories rather than the caring, professional entities they ought to be.

Implicit in Boy Interrupted is just how daunting -- and crucial -- issues of health-care reform are. The film is testimony to so much we do not know, but is also a revelation in depicting the effectiveness of the patience and skill involved in high-quality care where we have a fighting chance to know and better treat patients. It is not a matter of politics, but a choice of life over death and health over disease and dysfunction. We see how bipolar disorder can distort perceptions, so too does partisan politics that smears what is the right of every American. Canada is not a bad word and a social democracy in which every person has equal access to quality health-care should not be a frightening proposition. We lag behind other compassionate nations in education, health-care, science, and too often refuse to embrace the soothsayers, our great American dreamers, our own home-grown filmmakers and other artists who have the wonderful audacity to show us their truths.