Self-replicating robots could be the solution to making first contact with an alien civilization.

These proposed exobots could efficiently explore our local galactic neighborhood and help locate any extraterrestrials that may be sending radio signals in our direction.

After 50 years of searching the heavens with radio telescopes and coming up empty, the SETI Institute's search for extraterrestrial intelligence may need an extra robotic boost. 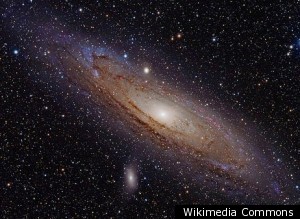 In the current issue of the Journal of the British Interplanetary Society, John D. Mathews, a Penn State University professor of electrical engineering, offers his vision of a future populated by helpful and cost-effective exobots.

"It's extremely expensive to put humans in space," Mathews told The Huffington Post. "It's relatively cheap to put robotic vehicles in space. It's the path I started exploring and realized along the way that maybe we've elevated ET to this sort of god-like creature with amazing technology, and maybe that's not true -- maybe that's why we haven't found ET."

Mathews suggests that extraterrestrials may be traveling the same path to the stars as humans are, sending robots instead of living beings.

"If we explore our solar system, we'll use robots first," he said. "Humans may follow, and we can't launch everything from Earth because of the cost. We need to have robots reproduce themselves. Furthermore, they would communicate using very narrow-beam laser systems. If ET is doing that, it makes them very difficult for us to see, except by accident."

NASA took its first step in using humanoid robots in space last year when Robonaut 2 hitched a ride to the International Space Station on board one of the final space shuttle missions. 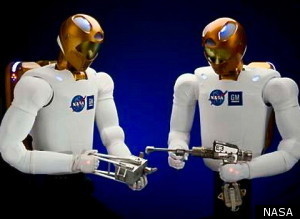 R2 was created to help with specific tasks, and with many more robots planned for future space endeavors (like the two mechanical men at right), it's a natural leap to have robots help make that first contact with an alien civilization.

But there are still some who oppose reaching out to ETs.

In 2010, famed British astrophysicist Stephen Hawking said he believed aliens are out there, but cautioned against trying to make contact with them, fearing it might turn out very badly for Earth.

"Hawking is concerned about the possibility of betraying our presence, that, if they were to come here, it might not be good for us," said Seth Shostak, senior SETI astronomer. "It's hard for me to believe that they actually have (hostile) intentions on us," he added.

Shostak told AOL News that the search for aliens is like listening to a radio station: "When you tune in your favorite DJ, he doesn't know you've tuned him in, so there's no danger in SETI."

Mathews agrees that there's probably nothing to worry about if aliens pick up on any signals humans send into deep space.

Check out this SETI video:

The Penn State engineering professor would like to see humans go back to the moon to establish a robotic factory. From there, he envisions sending exobots to asteroids to monitor the many large space rocks that pose potential threats as their orbits sometimes bring them close to Earth.

These exobots could aid the search for alien signals and might eventually intercept one from an extraterrestrial robot coming toward Earth. "As we go out into the solar system, we might actually find that ET is already here in the form of robots," Mathews said.

"We need to make decisions on what we will do when approached or when we discover that we're not alone, because I firmly believe we are not alone."