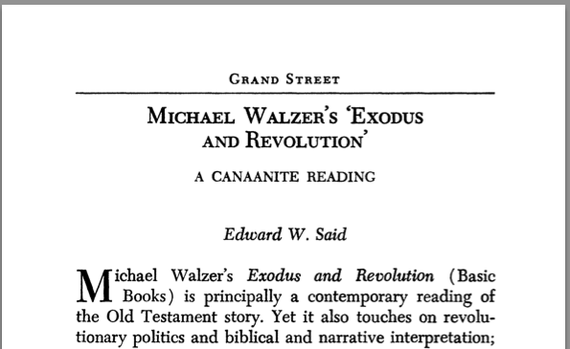 In 1986, the literary journal Grand Street published a series of exchanges on the subject of Exodus and Zionism between two New York intellectuals, one Jewish and one Palestinian. The site of their contention was Michael Walzer's recently published book, Exodus and Revolution, which was criticized for its political Zionist agenda in a review by Palestinian-American scholar Edward Said. This week, Jews around the world are celebrating Passover, the holiday that commemorates the book of Exodus as a story of the liberation of the Jews from slavery in Egypt. As Passover comes to a close, it is worth revisiting this exchange to see what it might illuminate about the debate around the viability of liberal Zionism in the wake of the recent Israeli elections.

The premise of Exodus and Revolution is appealing. Walzer argues that the Exodus story forms the basis of liberation politics, and has been invoked by a lineage of revolutionary movements. The Exodus story is read as an inspirational narrative arc, from oppression in slavery to liberation in the Promised Land. Social movements from abolition to the Civil Rights Movement have invoked the story of Exodus to inspire and frame their own journeys from oppression to liberation.

There is a reason that Passover is the favorite holiday of liberal and progressive Jews. Year after year, we tell the story of our liberation as a reminder that our liberation will not be complete until everyone is free. Given this reading, it should not be surprising that the major Jewish social justice organizations released a Passover reading guide to Exodus and Revolution in 2008. However, in practice, these groups fall into the same "progressive except Palestine" logical fallacies that enable liberal Zionists to check their liberalism when in comes to justice for Palestinians.

The problem, as Said so eloquently laid out, is that Walzer's thesis only holds up with a selective reading of both history and the biblical story. Walzer's argument that the Exodus story arc is central to all liberation politics centers a linear Western, Judeo-Christian narrative of history, requires both the biblical story and historical movements to be narrated in a way that minimizes and avoids the most disturbing parts of the story.

The liberation of the Jews from oppression in Egypt did not come without a violent cost, and the Promised Land they reached was not empty. As the Israelites prepared to enter the Promised Land, they were given permission to drive out and exterminate the Caananites who were already living in the land. Telling the Exodus story without acknowledging the violence against the Caananites is similar to repeating the Zionist myth that Israel was a "land without a people for a people without land." As Said asserts, "There is no Israel without the conquest of Canaan and the expulsion or inferior status of Canaanites -- then as now."

In his deliberate elision of this portion of the Exodus story, Walzer's intellectual dishonesty and his political intentions become clear. Said accuses Walzer of a not-so-subtle political agenda: Advancing a framing of the nation-state of Israel as the result of a liberation movement. By co-opting the rhetoric of leftist revolutionary politics in the midst of decolonization struggles, Walzer's framing contributes to the production of Israel as a liberal cause, a framing that erases and excuses the violence against Palestinians that resulted in the establishment of the State of Israel.

Said's Caananite (Palestinian) reading of the text requires that we face this commandment head on as a historical reality. In order to reconcile the progressive values embedded in this historical and biblical narrative, we have to grapple with the violence and suffering that came at the cost of partial liberation. The majority of contemporary Jews see the founding of the State of Israel as the fulfillment of Jewish liberation.

For Jews, political Zionism is framed as a national liberation movement, while for Palestinians, Zionism is the colonial ideology that brought European Jews into power in their land. While Jews celebrate the founding of the State of Israel as national independence day, Palestinians simultaneously commemorate the Nakba, the catastrophic massacres and expulsion of 750,000 Palestinians from their homeland.

The recent Israeli elections, with the ugly and anti-peace campaigning by reelected Prime Minister Benjamin Netanyahu, have reignited the debate over liberal Zionism. Can the liberal values of equality, freedom and dignity coexist with the Zionist dream of a Jewish majority state while Palestinians are either second-class citizens, under occupation or in exile?

As France, the U.S. and other world powers discuss the possibility of a UN resolution on Palestinian statehood in the coming weeks, it is crucial that we face head on the most difficult sticky point of any potential political solution to the conflict: the Right to Return.

Quite simply, we have to talk about the Nakba in order to be able to imagine a peaceful future in the region. There is no way to reconcile the Palestinian desire to the right to return to their homes with the fear that Israelis have of losing Jewish hegemony over the land without grappling with the history of expulsion, loss and violence that was necessary for the founding of the state.

The Passover seder concludes with the words "Next year in Jerusalem." Zionists use this piece of the liturgy to reaffirm the idea that the State of Israel is the fulfillment of two thousand years of Jewish desire to return to the land of Israel. But to me, the racist, militarized nation-state that Israel has become is not what "Next year in Jerusalem" refers to. This aspirational wish is instead an expression of hope that the next year will bring the fulfillment of communal liberation.

This year, at the seder table, let us say "Next year in Jerusalem" with a commitment grappling with this history of violence and the current reality of occupation in order to advance towards the possibility of collective liberation.

Next year in Jerusalem.