We often get mired in questions of whether media use is OK for children, long after family patterns and habits have been established. At some point, it makes sense to shift focus and resources to how to make media beneficial for young people -- to research and curate best practices, so that content creators have help in aligning their ideas and designs with child development, how kids play and learn, and what engages and entertains them.

"Exploring Play and Creativity in Pre-Schoolers' Use of Apps," conducted by Dubit and the University of Sheffield, with other partners including CBeebies, the University of Edinburgh, Monteney Primary School and Foundling Bird, is just such a study. Dubit's ongoing trend research has shown a steady rise in preschoolers' use of tablets, for a variety of purposes: apps for play, creativity and early learning; watching videos; sharing e-books with caregivers; communication with distant family; and more.

"Exploring Play and Creativity" used a mix of research methods - a 2000-person survey, home visits with play-testing and interviews, observation of children in the target age, and an analysis of the features and affordances of pre-school apps.

What we found revealed fascinating details about how physical and cognitive development tracks alongside capability for using touchscreens, and how kids and families organize their days to reflect the ebbs and flows of a day's activities and emotions. Each of these discoveries offers critical insights for anyone making tablet games, apps or ebooks for young children, and can be informative even to those making media for other platforms or physical products.

Navigating on a tablet requires a set of unique skills that weren't necessarily part of children's play prior to the touchscreen. Few toys of prior eras called for swiping, tapping, dragging or pinching. Still, few adults watching toddlers on tablets fail to be boggled by their facility.

Our study found a consistent pattern in little children's learning of a tablet's operating features. Swiping - to move a scene or turn a page - is reliably among the first gestures learned, and more than half the children in our research could do so on their own before age two. Fortunately for parents, skills like following the steps to find and purchase an app takes significantly longer to learn. 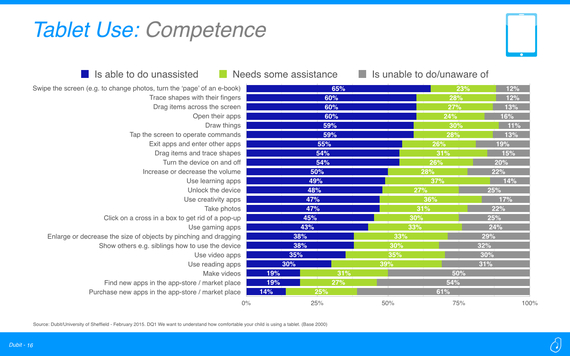 A contemporaneous study from Cork University Hospital found similar results to ours, and even raised the prospect that, someday, these emerging capabilities could be used as developmental indicators.

Even though today's children are mostly freed from the tyranny of scheduled media (you must watch this at 3 pm or miss it), our study revealed that they practice something we call "emotional scheduling."

In other words, the rhythms of family life contribute strongly to patterns of children's media habits. Weekday technology use spikes in the afternoon, after preschool, though for the littlest children it's a little flatter across the day. Weekend use is more steady and similar across ages. Even the room in which play takes place is consistent - mornings in the kitchen at breakfast, in the living room at midday and the bedroom in the evening. 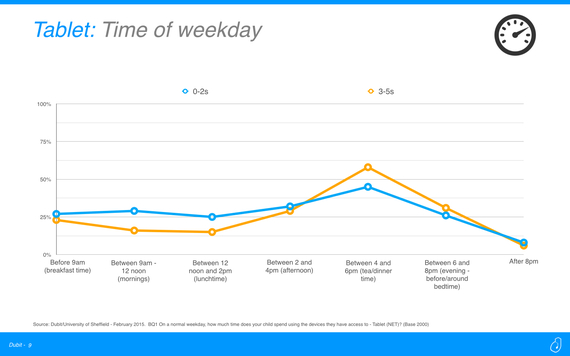 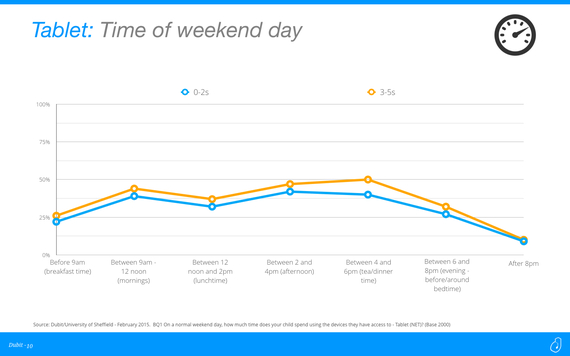 Parents reported making most of the decisions when to allow play, though kids played alone for the most part (with parental or sibling co-play in particular situations). A number of factors can influence "emotional scheduling" - how much time is available, whether the goal is to "ramp up" or "wind down," what else is happening in the home, and more.

This information is just the tip of the study, and we've learned more since. The "Play and Creativity" research findings and the thinking behind them are baked into the Dubit creative development and digital building process. In a crowded marketplace, there's no long a question of whether young children will be playing with tablets, but understanding how, when and why can make the difference between a kid and parent favorite and one that never breaks through.

Want more information on this or other Dubit research and how it can shape strategy? Follow us on Medium, subscribe to our newsletters, or contact Stephanie Whitley.