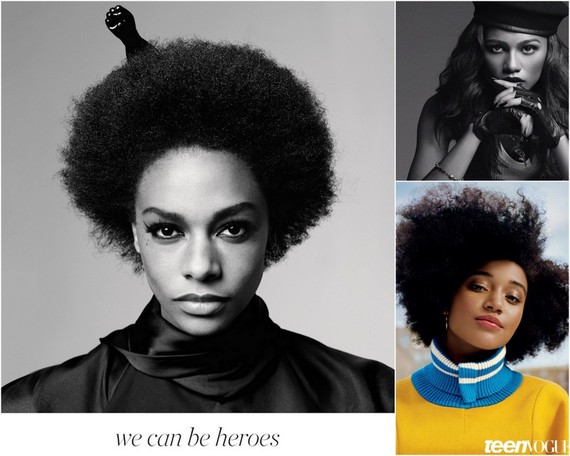 It's true-the face of the young, celebrated, modern-day black feminist is light skinned, or biracial. Think Amandla Stenberg, Willow Smith, and Zendaya Coleman. It's also true that it's been the the aesthetic of popular black feminists in the past. Think Angela Davis and bell hooks.

This point was rehashed on the Son of Baldwin Facebook page. The post highlighted a series of tweets from Pax Jones, the woman who launched the Unfair and Lovely photo series addressing colorism with her classmates from Sri Lanka. According to Jones:

"I love Amandla & Zendaya, but are we going to acknowledge that the face of young black feminism is the light skinned, biracial aesthetic?"

"Dark gurls have always spoken up, but don't get onto vogue & receive praise for being opinionated. If ur dark, ur just 'mad'."

"Until yall acknowledge ur privilege, I don't care to hear another light skin black gurl with curly hair talk about how hard being a BW is."

"Your experience is not shared w/dark women, yet you're given the platform to represent all of us. No. Tired."

As we unpack all of the baggage brought on by colorism, this is clearly an issue that deserves to be dissected. Let's start by acknowledging the fact that Stenberg and Coleman are smart and savvy young women doing important work. They have embraced their blackness and they use their platforms to educate the masses on how black people, particularly black women, are dehumanized, devalued, abused, and discarded by society. Neither have had to leave the comfort of their homes to do this work. They raise their voices via social media, then subsequently through larger avenues in the form of Oprah Super Soul Sessions, interviews, and magazine cover stories.

But what we also know to be true is that dark (or darker) skinned women not only exist within this movement, they helped to strengthen it in ways that often go unacknowledged or underreported by the mainstream. Alicia Garza, Opal Tometi, and Patrisse Cullors, the founders of Black Lives Matter come to mind. Yes they have received recognition, and yes, they are older than Coleman and Stenberg, but their level of recognition barely scratches the surface in comparison. In fact, some seek to discredit their ability to claim that they are founders of the movement they started. I was slightly shocked when I was at an event recently and I heard someone say, "I wonder who started Black Lives Matter." It's a question that's become somewhat common despite their televised award show appearances and international travels delivering speeches on the movement.

To be fair, women like Coleman and Stenberg have show biz recognition that supports their popularity as activists. And as they appear in major films and television shows and walk the most coveted red carpets, the mainstream reminds them of their blackness regardless of the privileges they enjoy. Amandla got a taste of this after she was cast in the Hunger Games, which upset white fans of the trilogy who felt a black girl wasn't a fit for the role. On first discovering her call to activism, she told Teen Vogue:

"It was when I was 12 and I got cast in The Hunger Games, and people called me the N-word and said that the death of my character, Rue, would be less sad because I was black. That was the first moment I realized being black was such a crucial part of my identity in terms of the way that I was perceived and how it would affect any line of work that I wanted to pursue. I often find myself in situations where I am the token black person. It can feel like this enormous weight."

Ironically, Stenberg's mainstream recognition as an activist likely comes as a result of her appearance in such a major film project, which is largely a privilege reserved for black women who are biracial or fair skinned. In other words, they have to fight to defend their blackness within the mainstream, but their level of blackness still affords them the ability to move in spaces many dark skinned women have to work twice as hard to enter into, therefore the popular black feminist aesthetic has become a reflection of the black female position in Hollywood.

For those who wish to brush this issue aside and write it off as yet another way for people to pit black people against one another and overlook the real "enemy," understand that this is another layer of the human need for representation. Wouldn't it be beautiful if snapshots of modern-day black feminists are as colorful as we are as a people?

Where is Keke Palmer's Teen Vogue cover story discussing the joys and difficulties of coming out as sexually fluid? Her body of work should be enough to grant her such recognition. Can we get a Super Soul Session featuring Reagan Gomez on how she's been successfully using social media for years to discuss feminism, womanism, and LGBTQ rights?

So here's a question brought on by Pax Jones' Tweets: should light skinned black women begin to acknowledge their own privileges and how it's afforded them the ability to become the poster girls of the modern-day black feminist movement? Wouldn't that be an important piece in discussing the dehumanization of black women? Or is celebrating ones blackness deemed more revolutionary when the message comes from someone with lighter skin? We sure hope not.