When my kids were young, making things involved macaroni, feathers, glue and paper plates. The desire to make things and the joy that comes with completion has not diminished. But boy have the tools changed.

Drones, robots, 3D printers, electronic kits and tech infused building blocks have become the new spirit of project time with the kids. And "I-made-it-myself" play is taking its place at the top of heap in the hopes of fostering the skills the 21st century job market will require.

This message hit home to me on our annual pilgrimage to the NYC Maker Faire a few weeks ago. Maker Faire is sort of a mashup between a family picnic, the world's biggest science fair, and a geek playground. This year's Faire featured 900 makers and 90,000 visitors who trekked to The New York Hall of Science (NYSCI) in Queens, New York, to get a fix on the triumphs and foibles of making stuff.

What started as sort of a Whole Earth Catalog counter culture mentality in the late 60's has been resurrected, resuscitated and reborn as the Maker Movement, where self-sufficiency, ingenuity and a spirit of intrepid exploration abound. Here are a few things that struck me as I watched tens of thousands of people gather to celebrate making.

It's A Family Affair. One look at the photos in the slideshow below and it's plain to see that kids were at the forefront of the Faire. Geek parents stood proudly, encouraging their budding young makers. Over 350 of the exhibitors at the show had hands-on activities for families -- from wiring circuit boards to playing a synthesizer, from painting with pixels to drone flying. Nearly every kid had some "made" contraption to show off by the end of the day and me, I wanted to build a "rent-a-kid" booth to help those left out of the fun.

A Low Bar to Entry. Easy to master, do it yourself kits from companies like littleBits, Lego Mindstorms, MakeWonder, and Spin Master are giving kids a challenging but manageable sort of paint-by-numbers version of making stuff. By creating simple games, companies like these invite kids to try to get something to work, a robot that dances or lights blink on and off. While not inexpensive (hovering at about $100 each), the experiences toys like this provide can get increasingly intricate as kids skills grow.

It's Not Only About High Tech. Cardboard and fabric also played their roles at the Faire. Coke Zero and Mentos mixed together to create a Fizzology experience. Non tech projects ranged from storytelling to knitting.

Dropping Prices. The prices of 3D printers will be as low as $400 by this holiday season. Powerful robots are selling for $100 and change. Basic drones are now under $100. These are the modern day Erector Sets and Lincoln Logs, with a splash of high tech.

The School Tech Connection. Schools are jumping on the bandwagon, purchasing 3D printers and soldering irons for collaborative curriculum based products. Programs like SciTech Kids, RoboFun and Brooklyn Robot Foundry were just a few of the organizations at the Faire advertising afterschool and weekend classes to build robots, fashions, and video games. School teams from all over the tri-state region displayed their creations, many the products of after school clubs and science classes.

Entrepreneurship Starts Here. Dozens of under 18 year olds were displaying their wares. Becky Stern of Adafruit was showing young (mostly women) how to sew with circuitry to create fashions. ToyLabCo's 3D dolls were printed to look like everyone from Marissa Mayer to Carly Fiorina. After the show, I spoke to one young maker, Daniel Luntzel, from Colgate College where they've started a "Build Your Own 3D Printer" project to provide 3D printer kits to students.

Applied Science. It's not pure love of science, rather science in the context of solving real problems that gets these kids pumped. Building your own circuit board is cool. Building it to light up a doll house or a clubhouse is cooler. At the Faire, kids (and a few anxious adults) lined up for soldering lessons. Even chilling out can become a maker activity at the Faire when Netflix gave out plans for a Chill Button to automatically dim the lights and turn on your show. 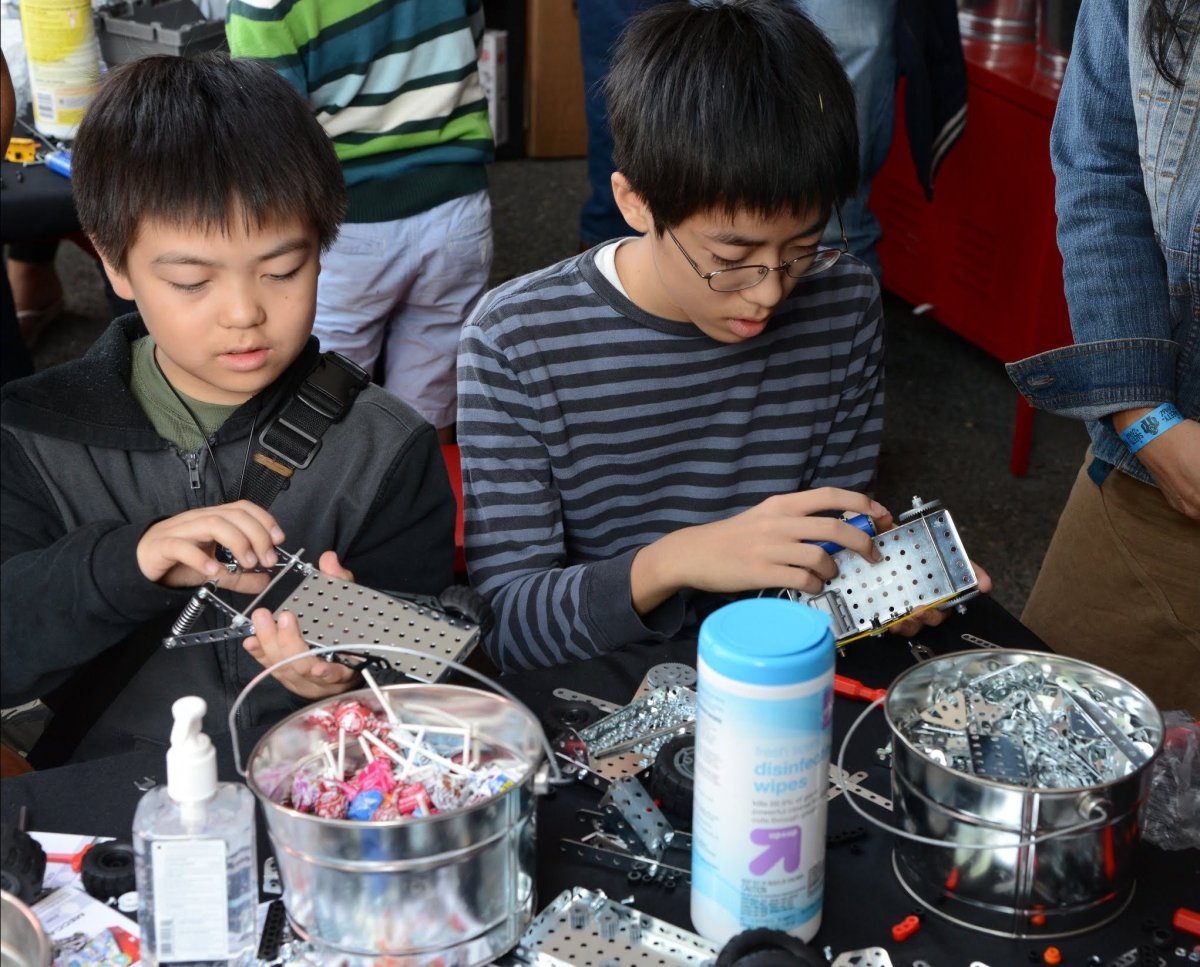