The uproar over Miley Cyrus' MTV Video Music Awards performance just won't stop. Its newest iteration comes in the form of more than 150 complaints to the Federal Communications Commission from concerned citizens across the country who want MTV or Cyrus herself punished for indecency.

"She backed up against her male co-singer's genitals in a doggy-style position and humped him like a bitch in heat," laments a shocked viewer from Maryland, undermining his or her own argument by cursing throughout the description. "Had I wanted my family to see a hooker perform a live sex show, I would have taken [them] to Tijuana."

One outraged Connecticut resident claimed that Cyrus' twerking gave her co-performer, Robin Thicke, an erection that was "easily noticed through his pants." There is, however, no evidence Thicke had an erection during the performance, and if he did, one would need to scrutinize his groin in order to notice it.

The complaints, which were obtained by The Huffington Post through a Freedom of Information request, point out that MTV rated the show as TV-14.

A TV-14 rating means that a program "contains some material that many parents would find unsuitable for children under 14 years of age," but it warns that the program may contain "intense sexual situations" and suggests parents exercise caution in "monitoring" the program.

As The Smoking Gun point out, the FCC regulates only broadcast TV channels like ABC or Fox, not cable networks like MTV. On the FCC's website, a page titled "Regulation of Obscenity, Indecency, and Profanity," the agency explains that since cable channels are subscription-based, consumers "have greater control over the programming content that comes into their homes."

Take a look at some of the funniest complaints filed with the FCC (below), and visit The Smoking Gun to view even more complaints. 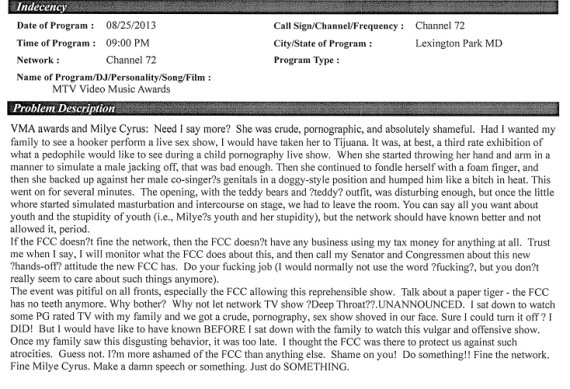