In yet another installment of the solid jobs reports we seen in recent months, February's payrolls were up by 295,000 and the unemployment rate ticked from 5.7% to 5.5%, the lowest it has been since mid-2008, according to this morning's job market update from the Bureau of Labor Statistics (BLS).

Still, while there's no doubt the labor market is improving, and doing so at a faster clip than in recent years, there are still missing ingredients suggesting that the US job market is not as close to full employment -- a truly tight matchup between jobs and job-seekers -- as the low jobless rate suggests.

The good news is clearly the pace at which employers are adding jobs on net. Because the monthly data jump about a bit, what you want to do is smooth out some of the monthly bips and bops by averaging payroll gains over the short, medium, and longer term, as I do in the monthly jobs day smoother, shown below.

Over the past three and six month periods, payrolls are up about 290,000 on average; that's 3.5 million jobs per year if it sticks, and as you can see, an acceleration over the 12-month average. 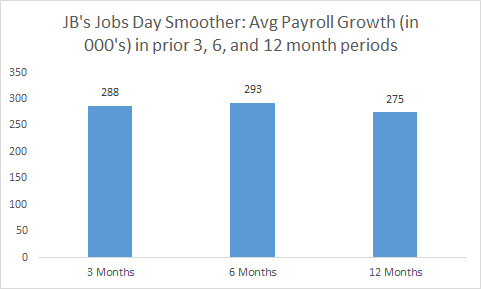 So what's not to like? Two things: wage growth and labor force participation, though the latter is stable, which is an improvement over its earlier declining trend.

Wages: Even as the job market has clearly improved, nominal (the distinction between nominal and real is important here) wage growth has been a salient missing ingredient from the recovery. Very low inflation -- last seen the yearly pace of the CPI was -0.1%! -- means even a little bit of nominal growth improves the real buying power of the paycheck. Even if your employer keeps paying you $400/week, if the price of a tank of gas goes down, you're better off in real terms.

Still, a truly tightening labor market should be prompting some wage pressures as employers need to bid up wage offers to get and hold on to increasingly scarce workers, so the fact that nominal wages have been growing for years now at a steady and low 2% rate has led me to question just how tight the job market really is.

According to the most recent Beige Book -- the Fed's informal survey of businesses across the land -- employers are reporting some wage pressures.

And yet today's jobs report showed average hourly earnings up 2% once again, in lockstep with the long-term trend and down slightly from the 2.2% pace in January.

The fact of more people working more hours per week, along with about zero inflation, means real weekly paychecks are up significantly, so living standards should be improving. But such low-inflation will not last -- and can itself be a sign of underlying weakness (though it's still largely an energy story) -- and families can add only so many hours before facing real stressors trying to balance work and family.

Labor force participation: The unemployment rate fell in part because more people got jobs but also because the labor force contracted. These monthly numbers are particularly noisy, so the trend is key, and it shows the share of the population in the labor force bouncing around 63% (it was 62.8% last month) for over a year. That's down from a pre-recession peak of around 66%, a large drop in a key indicator.