For a movie that features drugs, jealousy, betrayal, sex and murder, The Snitch Cartel, Colombia's entry in the race for Best Foreign Language Film at next year's Oscars, offers a tepid rush and some nagging side effects.

Despite recounting a volatile era in the Colombian cocaine trade, director Carlos Moreno's take on the aftermath of the battle between the Cali and Medellin cartels after the death of Medellin leader Pablo Escobar features some familiar faces, some adequate action and an odd sense of indifference. 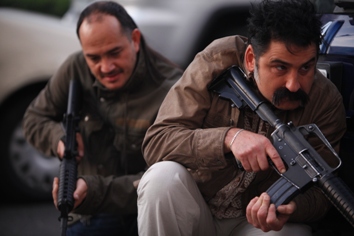 The tale begins in the early 1990s when a pair of working class toughs named Martin Gonzales (Manolo Cardona) and Pepe Cadena (Diego Cadavid) think they have arrived. Despite Martin's modest origins in Cali, Martin's friendship with Pepe has made both of them some serious cash thanks to America's demand for cocaine. Pepe's brother is Don Oscar (Fernando Solorzano), a powerful and wealthy drug warlord.

It's easy for the two to think that the good life will last forever. After all, the Colombian authorities aren't lifting a finger despite all of the bloodshed that has taken place.

Actually, the wedding is a tipping point. When Escobar's foot soldiers turn it into a shooting spree, the authorities are no longer indifferent, and the American DEA soon gets the power to extradite drug lords to the States.

Many like Don Oscar want out. Unfortunately, most of the narcos like Martin and Pepe have wound up with more debt than reward for their trouble, so the old dangers remain.

The Mexican drug merchants, led by Modesto (the late Pedro Armendáriz, Jr.) insist on getting their cut of the trade and pirate Colombian boats trying to cut them out. Martin also discovers that many of his old friends are singing like canaries to the DEA. Anyone he deals with could be setting him up.

While the backdrop offers lots of potential, The Snitch Cartel never really comes to life. Most of the characters are one note and not terribly sympathetic. We know little of Martin's life before he became a narco, so many of his misfortunes seem more like karma instead of experiences an audience can share. Like Sofia, it's easy to shrug off his choices as someone who deserves to be afraid because he's chosen a dangerous, contemptible profession.

Come to think of it, the relationship with Sofia seems more time-consuming than passionate. For a guy like Martin to give up the drug trade, she'd have to be his lifelong obsession. Instead, Cardona and Acosta simply come off as attractive paper cutouts.

Because all the Cali men depicted in The Snitch Cartel are thugs, they're tricky to tell apart, so there's no point in caring if any survive the crisis in the trade. Only the intimidating Armendáriz, who's not even part of the main cast of characters makes much of an impression. At least, he knows how to get the most out of what little the script has given him.

Tom Sizemore is appropriately sleazy as a DEA agent recruiting narcos to sing. Sadly, he's only in the film for a few moments. Because we see only fleeting glimpses of what life on the streets of Cali or New York, we learn only fragmentary information about the cocaine trade and its cost. Considering the ongoing cost of the war on drugs, that's as disappointing as a missed shipment.

Image courtesy of Once Once Films.