For the first two months of his life, all my son did was cry.

He cried in the morning, while I made breakfast for my three-year-old daughter, who covered her ears in annoyance. He cried from his perch in the tiny bouncy seat on the bathroom floor, as I stood in the shower and rested my aching head on the tile wall. He cried all night long, as I paced the room with his tiny body in my arms. Is he hungry? Is he wet? Is he in pain? I never knew. I never could tell! Nothing I tried helped.

"Something's wrong with him. I need help" I said frantically to the doctor after a particularly sleepless week. But he would only look him over and turn back to me, pleased.

"He's in the 95th percentile for weight and height, he's a strong healthy boy. You shouldn't worry so much. " The pediatrician would say, patting me on the back. And so my son and I would leave, only to return again.

"He never smiles. " I told the doctor, when my son was eighteen months old and still had not slept through the night. "He doesn't talk. My daughter was talking by now." Something was wrong, I felt it in my bones.

"Boys develop differently than girls. Give it time. Come back in a few months and we will reassess." He told me. I was bleary-eyed and exhausted as I stepped out of his office. For our own individual reasons, my son and I both cried the whole drive home from that appointment.

When I came back, with my non-smiling, non-speaking boy of two, the doctor was ready to listen.

Autism, they told us at the neurologist, after the hearing tests came back perfect, after the MRI was clear. Severe autism, classic autism, our same pediatrician confirmed. We really need to get you some help.

Help, he said, as though it was the first time that word had been uttered. It took all my willpower not to punch that doctor in the mouth.

And so, with a new baby and a five-year-old daughter in tow, I began the journey to "cure" my son. We went to speech therapists and Occupational Therapy, we cut "bad" food out, we added supplements in. I read more books and scoured the internet. I sat in a dark room and cried until the apples of my cheeks were dark and hallowed, until my eyeballs were bruised. The bus came every morning for my three year old boy, the child with the silent eyes and the sad mouth. I would stand in the doorway, waving with a baby on my hip and a lead weight on my chest.

This is the thing that no parent of a child with a severe disability wants to say: In the beginning, after the disbelief and the fear wears away, after the sadness disintegrates, you may be very angry.

Mostly, I was angry at the world, because I could not cure my boy.

Because here's the thing I want to say, in spite of what you may have heard: Autism can't be cured.

No matter what battles I waged, no matter how I clawed at my face and begged the stars to shine down some magic potion, I was not going to cure my boy.

And the peace set in once I realized that.

As the years passed, I saw my son grow and change. I watched him move in the direction that was chosen for him, by some force somewhere much greater than I. He did not, still does not, follow the path that I had dreamed of, when I held his pink, newborn body in my arms. At nearly twelve years old, he still has never called me "mama", still can not kiss me, and will never drive a car.

But he can say a few words now, and he can type in "tallest roller coaster" on the computer. He gets himself dressed every morning and brushes his own teeth at night. He loves art and gently leading a dog on a leash. He listens to Mozart and the Dora Explorer theme song.

But this does not make me sad or angry anymore.

We've come a long way together, my boy and I. I help him and try to make things better. But I also celebrate the little wins now, the tangible victories that come when you decide to love your child exactly as they are, without condition. The little triumphs that show how far we've traveled since those first difficult days.

Today, unlike those early days, I caught a magnificent glimpse of my son's smiling face, as he walked through the door after school. That's something worth celebrating.

Actually he smiles a lot now.

And you know what? So do I. 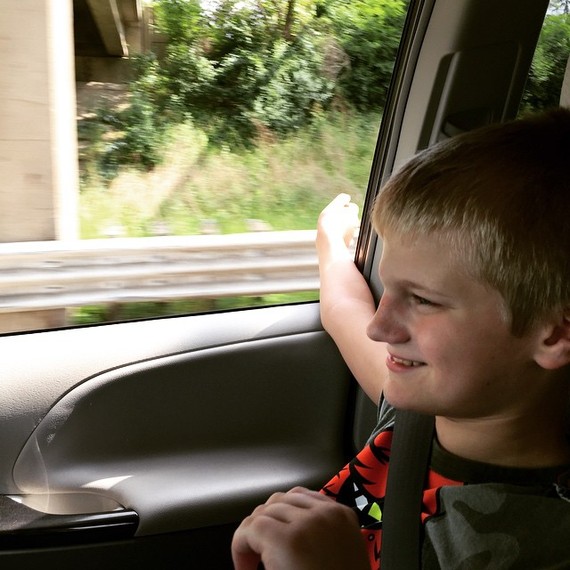