The Buddha probably wasn't referring to the gym when he said, "Wherever you go, there you are."

But, on the treadmill, in Spin class, at yoga -- yep, still you.

"Whoever we are, we manifest that in all of the realms of our life," James Gavin, Ph.D., professor of applied human sciences at Concordia University in Montreal tells The Huffington Post. "Physical activity is just another expression of our personal preferences and style."

So that's why you just can't get into Zumba.

"When people are similar to the activities they pursue," says Gavin, "they tend to be happier, express more satisfaction and stay with it longer." Enter: the fitness personality.

Consider how tough it is to stick with something you really don't like, says Ryan Rhodes, Ph.D., a professor in the Behavioral Medicine Laboratory at the University of Victoria. "We like the outcomes of exercise -- weight control, disease prevention, a boost in appearance," he says. "These are highly-desired things, but the process to get there is not."

Luckily, this is merely a framing problem: While we acknowledge that enjoyment is the primal impetus behind many of our daily habits when it comes to exercise, we focus instead on disease prevention, Rhodes says. Boring!

Instead of trudging along in workouts we hate, we may be able to learn something more from our natural emotional responses to exercise. In her 2009 paper, Personality, Physical Fitness, and Affective Response to Exercise Among Adolescents, Margaret Schneider, Ph.D., associate researcher at UC Irvine, explored the link between physical activity and two personality systems, behavioral activation (BAS) and behavioral inhibition (BIS).

Someone with a high BAS score is more motivated by reward, while someone with a high BIS score is more motivated to avoid punishment, Schneider explains, and physical activity can be both rewarding and aversive. "We know that at very high intensity, everybody feels bad," she says, but at a more moderate level, different people will feel different things while exercising. "People who are more BIS-motivated may be more sensitive to the negative cues like sweating, breathing hard and increased heart rate," she says.

Those cues are part of the body's physiological response to exercise, which is by definition a stress response, says Gavin. Additional pressure from an activity you truly disdain will only add more stress.

Early studies compared apples and oranges, says Gavin, and kept hitting dead ends. As he writes in his 2004 paper, Pairing Personality With Activity:

"Through the 1970s and 1980s, countless studies explored the relationship of personality traits to sport choice and participation. Most studies yielded results that could rarely be replicated. For example, some studies characterized runners as compulsive, depressed, inhibited, introverted, taciturn, cautious, deliberate, and suited to monotonous, repetitive situations. Others described runners as sociable, optimistic, sexually active, and well-adjusted. One report found that body builders had a pathologic preoccupation with muscularity, but another investigation found them to be quite normal. Martial artists were depicted as highly aggressive in one study, while another reported relatively low levels of aggression. Highly committed exercisers were described as narcissistic and obsessive-compulsive by one researcher, even though the general trend describes regular exercisers as well-adjusted." 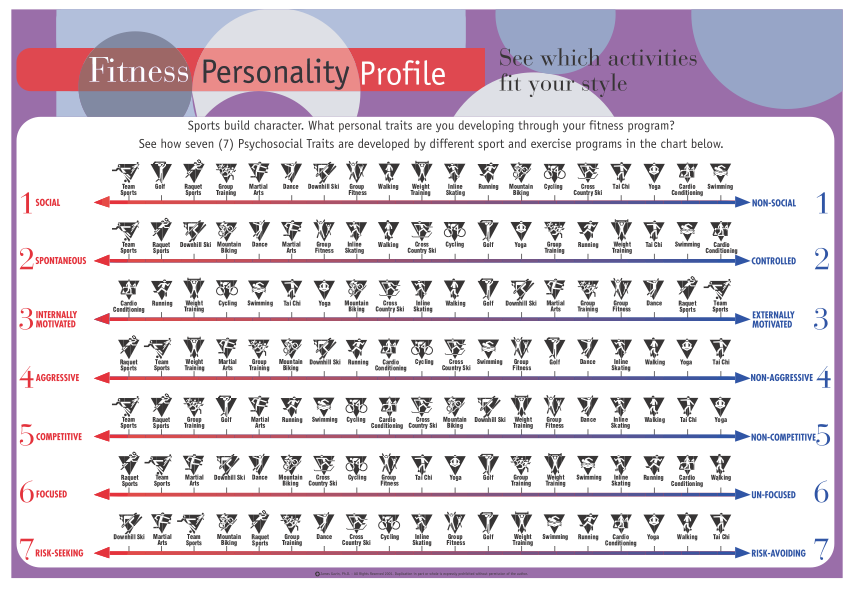 But Gavin isn't the only one trying to make a better metric.

"It's really important for people to know what their expectations are for fitness," says Jessica Matthews, an exercise physiologist and spokesperson for the American Council on Exercise (ACE). "What they gravitate to becomes helpful [in making] exercise something you want to integrate into your life and continue long term."

To help people along that life-long journey, Matthews developed a Facebook quiz for the ACE that sorts users into four fitness personality types. Someone who identifies as a Planner may take a more reserved approach to fitness, sticking to familiar, tried-and-true exercises, she says. A Go-Getter loves competition and intensity and thrives off of seeing continued improvement. A Social Butterfly, unsurprisingly, loves group fitness and positive energy, while the Adventurer will try anything and everything, even if it's just a passing fad. Each personality is also paired with some suggestions for how to bust through those typical routines to reach peak fitness.

Rhodes's 2006 paper Personality Correlates of Physical Activity focuses on three personality traits echoed in the ACE personality types and identified in the larger body of research as having a strong association with physical activity. If you identify as an introvert, he says, you may be less active, while extraverts seem to be more driven toward activity. Neuroticism was linked with difficulty sticking with a fitness program, while conscientiousness, which has been linked to overall longevity , may increase likelihood of following through.

What it boils down to, says Schneider, is that one size doesn't fit all. "Exercise prescriptions have mainly been driven by the fitness goal," she says. "If you want somebody to increase cardiovascular fitness, here's how hard they need to work. But if we change our vision to being one of keeping people active, it becomes a different task."

There's more work to be done before there's a precise model to pair up a person with their perfect workout, says Rhodes. In the meantime, it's up to us to figure out how our personalities helps us build and sustain our workout motivation, since those traits aren't going anywhere. "Personality traits are like luggage," he says, "we carry them around with us whether we like them or not."

9 Types Of People You'll Meet At The Gym