Over the past decade, the LGBT community has made significant strides toward full equality. We have leveraged the political process to achieve many of our important goals. These goals included passage of hate crimes legislation, the right to openly serve in the armed forces and marriage equality. Each of these fights was won because people got politically involved, either through executive order, legislative action or the courts. 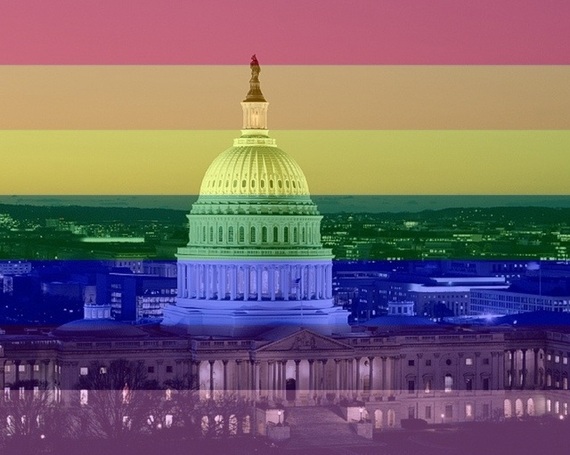 Image provided under Creative Commons License CC0 and modified with a rainbow filter by the blog author.

While marriage equality was an important milestone for our people, we still have other important goals to achieve. In over half of the United States, it's still perfectly legal to fire a person just for being LGBT. If you and your future partner want to adopt children, in many states you may have trouble finding an adoption agency that will support your desire to add to your family. In most states, you could legally be refused service in a store, not allowed to eat in a restaurant or kicked out of a hotel, just for being gay. Gaining equality in these important areas will require us to stay politically active.

As we fight for full equality, here are five ways young LGBT people can make a difference in politics.

1. Be out. If it's safe for you to be out, be out. If it's not safe for you to be out, you can be vocal about your political opinions. Being vocal is not as effective as being out, but it is a good start. People who know somebody LGBT have a much harder time voting against us. Your parents and grandparents, uncles and aunts, siblings and friends will have to think about how their vote affects you. If you are out to them, they are more likely to vote in a way that makes your life better.

2. Volunteer. Many political campaigns run on the power of committed volunteers. It's easy to donate a few hours a week supporting candidates and causes that are important to us. You can connect with volunteer opportunities through your school's political clubs (if your school has them), or you can reach out to the candidate or cause of your choice through social media. Not only does volunteering make a political difference, but it can help you develop important skills for your future career.

3. Attend a rally or protest. There's nothing more exhilarating than being around thousands of people who believe in a cause. Politicians, business leaders and the public notice large groups of people gathering to make a statement. If you choose to attend this kind of gathering, be sure that you know what you're getting into and have an exit strategy if the protest turns into something else. It may not be worth getting arrested and affecting your future career prospects -- or, depending on the cause, it might be worth it.

4. Personally communicate with your elected officials. It's easy to email your legislator, sign an online petition or post your opinion to social media, but the personal touch is far more effective. Legislators listen to people from their districts, and will take a personal note that crosses their desk much more seriously than a form letter. You can also pick up the phone and call their staff. My phone call to a state legislator allowed me the opportunity to testify against "conversion therapy" a few years ago. I was invited to share my experience because I shared my personal experience and not a form letter.

5. Vote - and encourage your friends to vote. Fewer than 25 percent of people under 30 voted in the 2014 midterm elections. Had every eligible young person registered to vote, and then shown up at the polling station, we would have a very different political landscape today. Younger voters are much more friendly to gay people and gay causes. If we want to achieve full equality, young people need to show up and vote!

Most young people can't afford to make large donations to their candidate, and a $10,000 per plate for a fundraising dinner is out of reach for most of us. A lack of funds should not stop us from working hard to make a difference in our community. These five options are free and will help us achieve full equality.