For the Accroche-Coeurs performing arts festival in Angers, France, Dutch artist Florentijn Hofman has created two enormous slugs 'racing' towards a local church. The slugs, which are made out of 40,000 colored plastic bags fastened to steel frames, evoke a multitude of metaphors and meanings. In an email to The Huffington Post, Hofman described the sculptures as echoing "death, faith, belief as well as the suffocating role that religion takes in society." (We thought the same thing, didn't we?) Scroll down for more images. 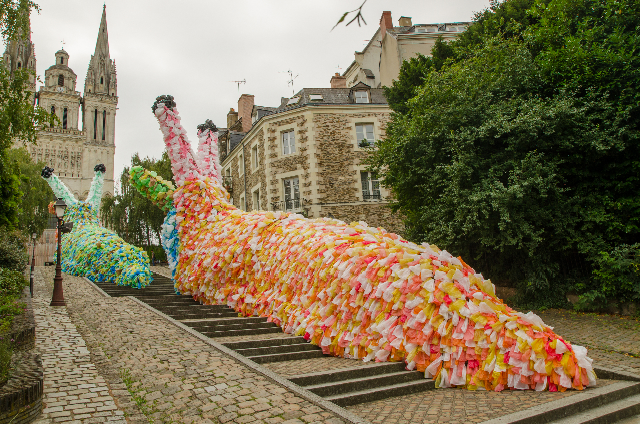 Hofman is not new to the world of colossal installation pieces. His other work often originates from everyday objects, including an inflatable rubber duck that floated around the world, an array of enlarged children's stuffed animals, as well as a series of massive grand pianos 'washed up' on the shore of the Island Schiermonnikoog. Hofman's sculptures can't help but remind us of Claes Oldenburg's quotidian objects depicted in monumental scale.

Hofman's slugs make a grand statement about death, faith, and belief, but also about consumerism, since their ascent towards the church is also in the direction of the city commercial center. As Hofman noted in an e-mail, "the work...gives a new perspective on the use of plastic bags in daily life and also reminds one of the loads of plastic litter in the world that slowly suffocates our planet." Well, that sucks the fun out of the work, doesn't it?

Be sure to check out the slideshow below for more images of his "Slow Slugs" and let us know your thoughts in the comments section. 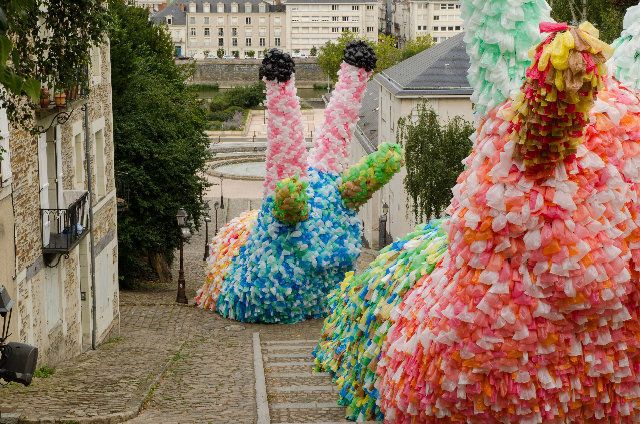